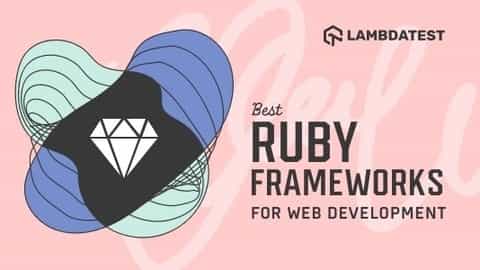 Ruby is a programming language that has been accepted with open arms since 1995, and thanks to its open-source nature, it is still growing every day. Ruby is fast, object-oriented, and secure, which brings a dynamic nature into the project with an MVC support structure that makes development more comfortable than ever. With start-ups openly accepting Ruby, the language has shown remarkable progress in almost every field, especially web development. Ruby’s popularity motivated people to take the development to the next level and bring out some best ruby frameworks for the developers.

Some frameworks are built to ease out middleware and request/response of the application. Some are made for REST APIs and others for web applications. Collecting the best ruby frameworks from across the globe, in this post, we’ll talk about these frameworks and how each framework lets the developer take advantage of Ruby.

Without further ado, let’s delve into details of the best ruby frameworks for web development that will surely benefit your business.

Ruby on Rails is regarded as one of the best ruby frameworks. It was the primary language in developing big projects such as Twitter and helped the language boost the community. Often referred to as “Rails,” Ruby on Rails is a web development framework with an MVC control structure and currently running its 6.1 version. The 16-year-old language has dramatically influenced the web development structures and managing databases, web pages, and other components on a web application. 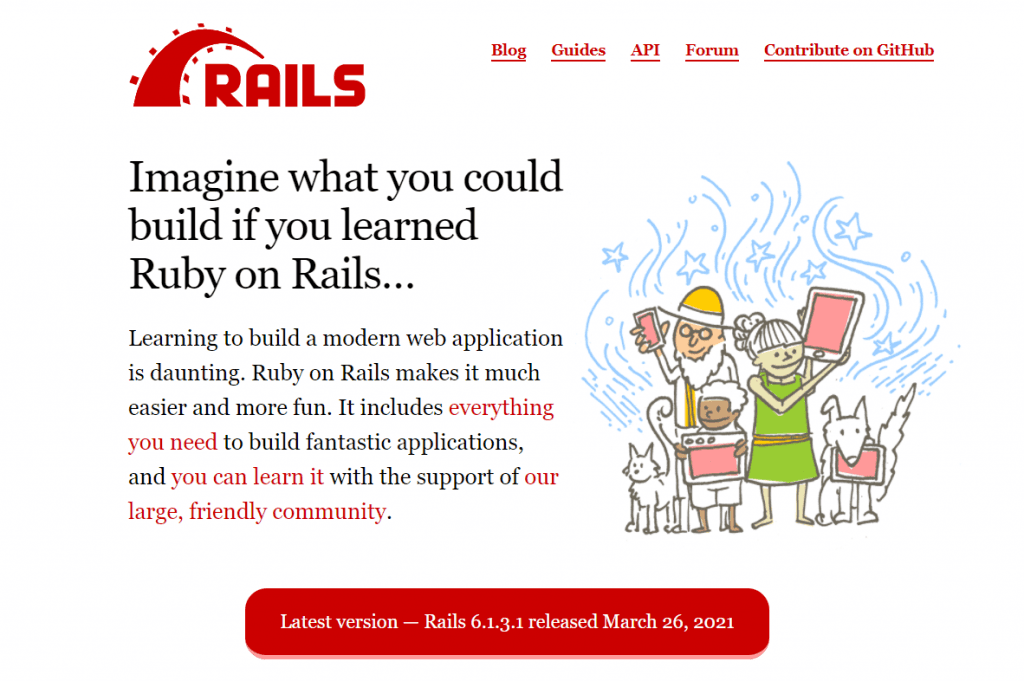 Ruby on Rails has an extensive plugin library called “gems” and can be distributed and installed through the popular Ruby package manager called RubyGems. The most notable Ruby on Rails projects include Twitter, Airbnb, and Bloomberg.

Sinatra is the best ruby framework available in the market for web development. Sinatra is a simple and easy-to-use DSL written in Ruby and often used popularly in place of Ruby on Rails as a web development framework. Sinatra is named after the legendary musician Frank Sinatra and is powerful enough to set up a fully functional web application with just a single file.

Sinatra was launched in 2007, is open-source, and hence free to use for the Ruby enthusiasts. Built on Rack, Sinatra can develop micro web applications to full-scale heavy web applications with fewer resources than rails. You would sometimes hear that Sinatra is a microframework, but that is just because of its lightweight and smaller size. In the arena, Sinatra is powerful, capable, and supports RubyGems to accomplish specific tasks with minimum effort.

Camping is another best ruby web framework. The source code of the camping framework is just 4KB in size, making it the most lightweight Ruby framework on the internet (with equal capabilities). Apart from its size, camping has also been popular since it was written by an unidentified programmer who disappeared in August 2009. Identified by the pseudo-name “Why the lucky stiff,” the programmer has left the project, and since then, camping has been an open-source framework with a huge community. 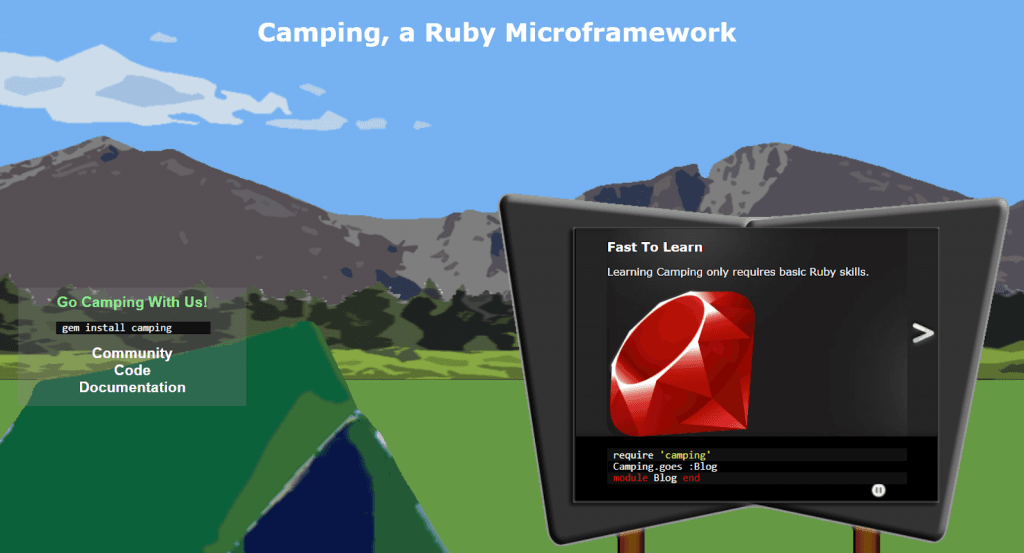 Camping requires Rack to work on the projects and is available as a RubyGem on GitHub. An excellent powerful feature of camping is converting the complete web application into a single file organizing it as an MVC structure. You can visit the official GitHub page to learn more about Camping.

Ramaze is another best ruby web framework in competition to help create outstanding web development projects. Being light-weight, Ramaze is faster and offers a flat learning curve. For ruby projects involving JQuery, AJAX, ORM, Javascript, or some templating engine, Ramaze stands as an excellent choice to be seen in the consideration. Ramaze is robust and popular as a “bug-free” framework.

Ramaze provides clean and light solutions as compared to Rails. The GitHub page for Ramaze can be accessed through the Ramaze Github link.

Unlike the other described ruby frameworks, which focus on the “development” part, Goliath is considered to be one of the best ruby frameworks written in Ruby. Goliath is a lightweight web server framework powering PostRank and focuses on server-specific mechanisms. These include implementation and management of Rack API, middleware in Ruby, and fully asynchronous processing. Goliath focuses on event-driven design, thanks to the EventMachine reactor, which forms the Goliath working basis. 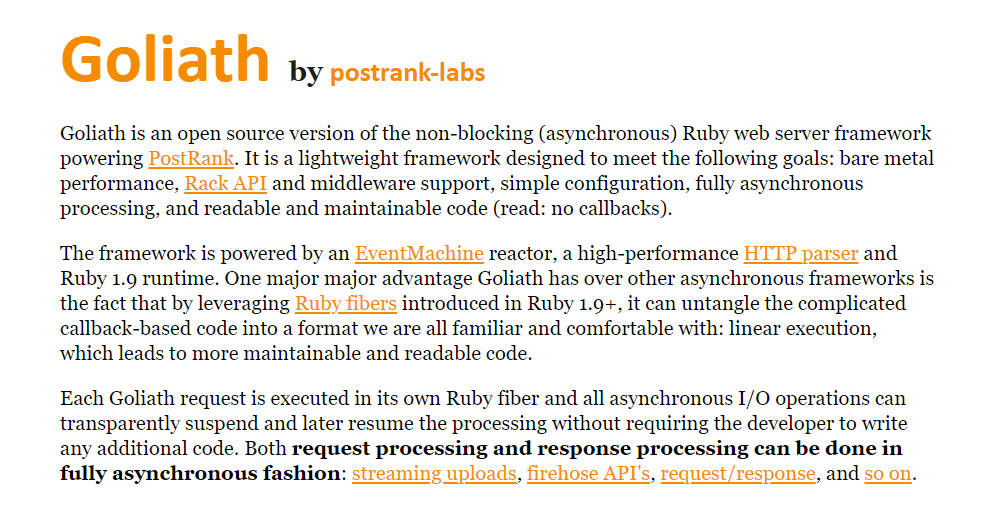 The Goliath project can be accessed through its GitHub repository page. Goliath boasts a powerful feature of decluttering the complicated asynchronous requests into a linear execution communication process. The asynchronous mechanism of Goliath can hence be used very quickly for streaming the data, firehose API, etc. Also, Goliath is open-source, which has been a significant factor in its linear development over time. If you are into web-server development in Ruby, you will love working in Goliath.

With a clean architectural design and a primary object methodology, Hanami is counted among the best ruby frameworks that have gained popularity as an alternative to Rails. Hanami is “sorted” in design and provides small files that can be used independently to create a project stack. Hanami is lightweight and consumes fewer resources claiming 60% lesser memory than other big Ruby frameworks.

Hanami is based on the MVC structure and offers excellent additional features like CSRF, HTML escaping to prevent XSS, and maintaining the browser’s content security policy.

Padrino is another best ruby web framework that is based on Sinatra and is open source in nature. Padrino is used popularly as an alternative to Merb and Camping. Similar to the frameworks mentioned in this section, Padrino too works on the Rack webserver interface. Padrino’s development idea comes from Sinatra’s popularity and extending Sinatra’s functionality to more and more domains giving it a shape of a library-rich framework.

Padrino’s benchmark metrics also reveal that it is four times faster than Rails. You can access Padrino through its GitHub page.

The NYNY’s official page defines NYNY as “ridiculously” small and considered to be one of the best ruby web frameworks. Ridiculously small in the sense that NYNY is written in only 300 lines of code, which is considered significantly less than other frameworks such as Rack. Honestly, a majority of plugins are written in more LOC than NYNY.

The highlighting thing in NYNY is that this ruby framework contains all the Ruby developers’ popular requirements. If you want something more, you can edit the framework and add your functionality on top of it. Such edits will help you build reliable and multi-functional middleware. 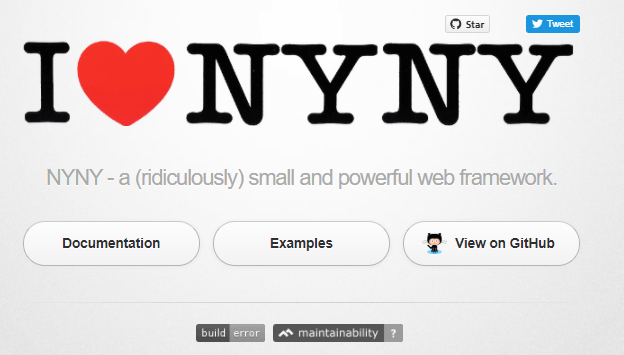 NYNY application can be used with Sinatra, Rails, or any other Rack-based application. The NYNY GitHub official page contains all the relevant information, from setting up to configuring the application to running it on the server.

Cuba is a microframework to develop web applications in the Ruby language. Rum inspires Cuba, and the official website defines Cuba as “a tiny but powerful mapper for Rack applications.” making it one of the best ruby frameworks. The GitHub page is a practical guide if you are looking to start development in Cuba. 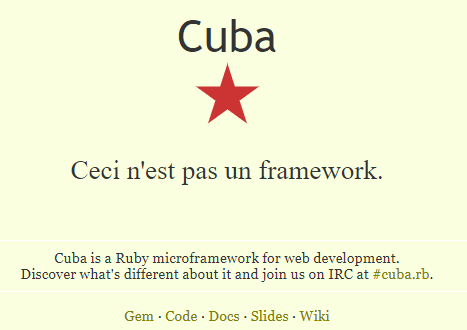 Cuba takes help from a lot of other technologies to bring the best of everything. For example, the responses in Cuba are the optimized version of the Rack responses. The templates are integrated via Tilt and testing via Cutest and Capybara.

Grape is a REST-like microframework written in Ruby programming language. Grape is also considered among the best ruby frameworks and can be used to run on top of Rack or can be used to complement the existing web application frameworks such as Sinatra or Rails. The latter can be done through the DSL-based REST-API for communication. The Grape ruby web framework facilitates efficient and meaningful APIs working in the web application domain. 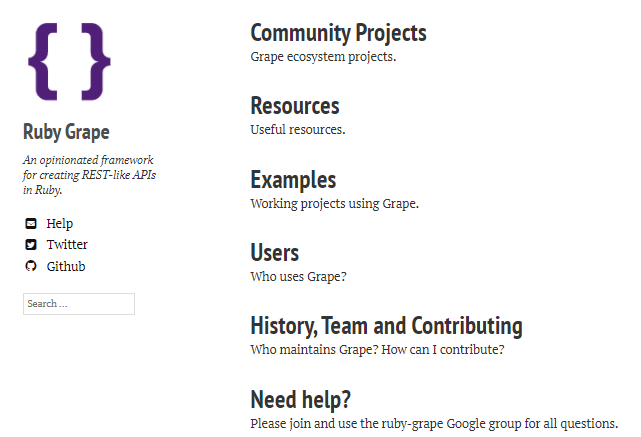 Scorched is another one of the best ruby web frameworks that requires Ruby 2.0 and above to work. Scorched is light-weight, and the official website states Scorched as “true evolutionary enhancement of Sinatra, with more power, focus, and less clutter.” Scorched developers have assumed that since Scorched is on top of Rack, the fellow developers are already familiar with it. With that effect, they have removed any “overlapping” functionality and kept Scorched simplified and concrete in its working.

Scorched is not recommended to new Ruby developers or inexperienced programmers. Scorched lets you experiment, implement new tools and play around with this open-ended framework. It provides a definite and robust structure for working with HTTP requests and can also be used for scalable ruby-based applications.

Roda is another best ruby framework that aids in building web applications. Roda relies on the simplicity, usability, and productivity of the language. Built on Rack, Roda offers a flexible architecture and a large variety of APIs. Roda is also known for bringing the routing tree web toolkit to perform requests at any routing point. It uses comparatively lesser memory and is very easy to install, configure and use. Roda ships with a very long list of plugins, including middleware, request/response, and mail. 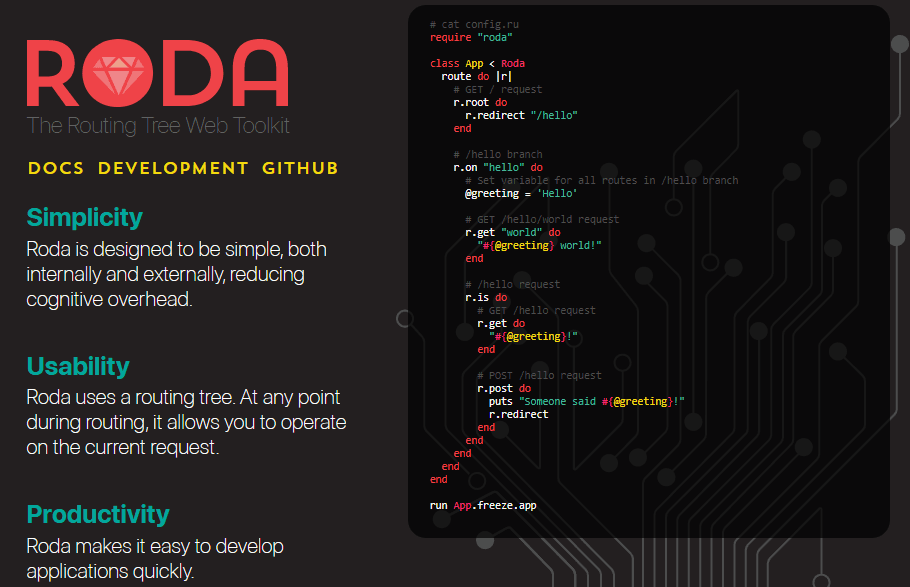 Volt focuses on a persistent communication network instead of HTTP to communicate between the server and the client. With synchronization mechanisms built into the Volt code, the data gets updated on multiple clients, servers, and databases with the change in any one of the clients. 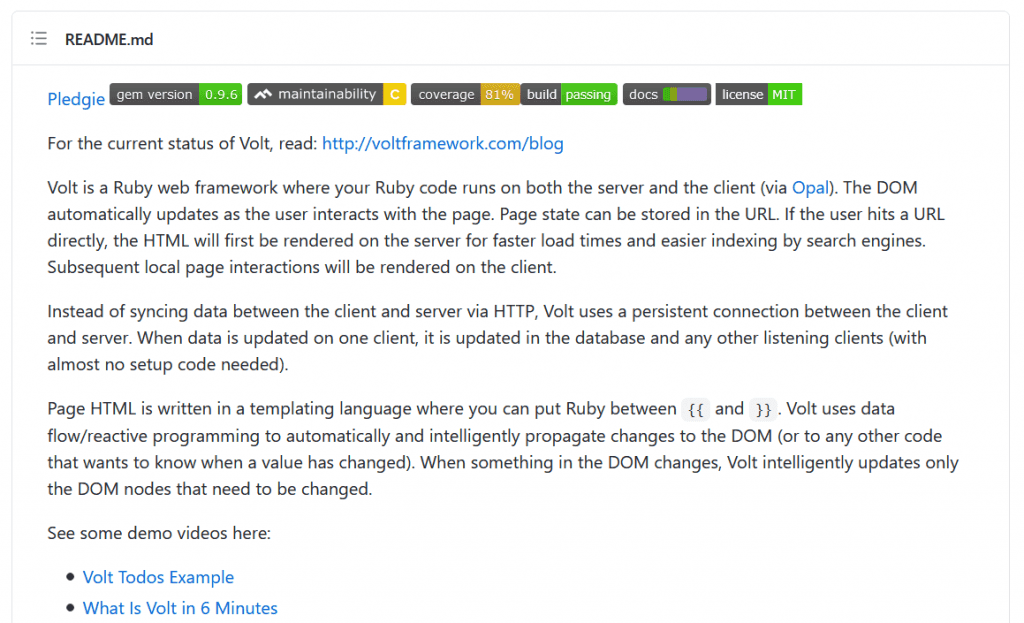 Volt has helped in building a lot of functional web-based applications working in various domains. To learn more about Volt, you can visit its Volt GitHub page.

Ramverk is a ruby web application framework that works on the minimalistic approach. Ramverk helps in building up MVC applications with a huge scope of adding your own functionalities into the framework. Ramverk aims to provide just the necessary functionalities to startup the application but demand more addition through the developer. 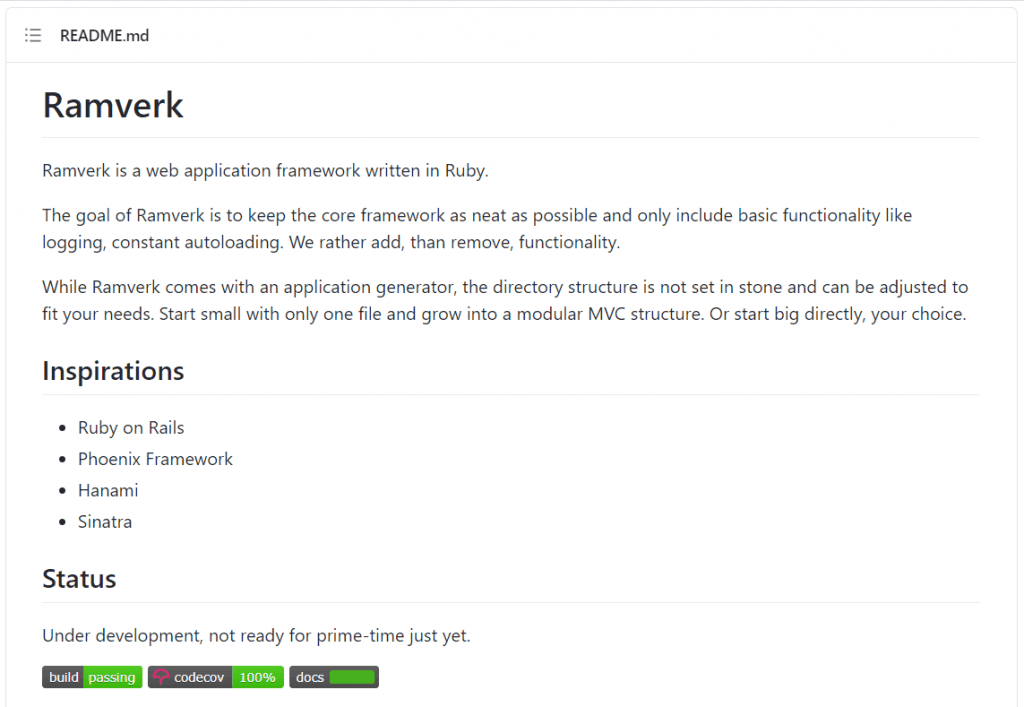 Honestly, Ramverk is neither that powerful nor provides a full-fledged framework for highly scalable and complex ruby applications. With a vast range to choose from, Ramverk indeed gets defeated due to the extra work it demands from the developers. But, Ramverk is still developing and hopefully will bring something concrete in the later releases. The Ramverk GitHub page can guide you through the installation.

The code of Hobbit can also be extended with various other Rack classes and modules with no extra logic. With minimum configurations, Hobbit is the right choice for developing web applications leveraging the functionalities.

You can access the recipes, templates, guides, and demo applications through the Hobbit GitHub page.

Cramp is a real-time web framework written in Ruby and built on top of EventMachine. Cramp is another ruby framework that uses asynchronous communication mechanisms and can be used smoothly for too many open connections. Cramp can be used for developing WebSockets, Server-Sent Events, and APIs. 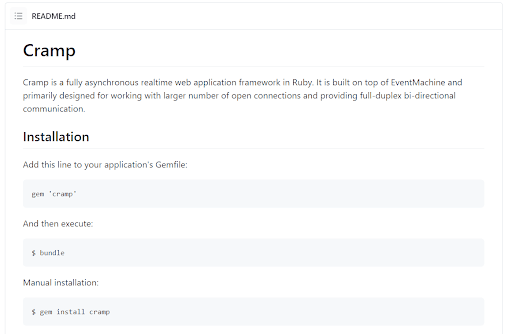 The official repository of cramp can be found on the Cramp GitHub page and installed via the simple gem command: gem install cramp. Cramp provides full-duplex bi-directional communication, which is efficient and faster.

Did We Miss Something?

As a reader and a developer, it is entirely up to your requirements to choose your best ruby frameworks. Regardless of the framework you use for web development, LambdaTest is a cloud-based cross browser testing platform that will support all your web testing needs with out-of-the-box features like responsive testing, visual UI testing, automation testing, etc.

You can also leverage LT Browser – a developer-friendly tool to test websites for responsiveness across 50+ pre-built device viewports like mobile, tablets, desktops, and laptops.

If you have experience in some other best ruby frameworks and are excited to have it in this list, mention your framework with its capabilities in the comment section below. I hope this list justified the ruby programmers and the people ready to dive into the Ruby pool. 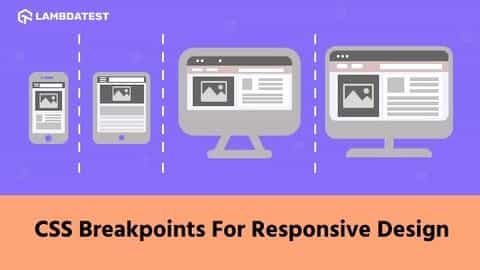 How To Use CSS Breakpoints For Responsive Design 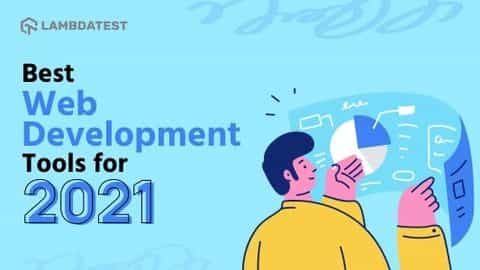 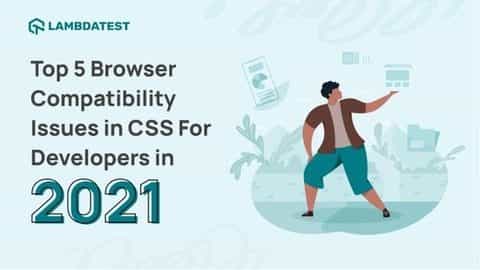 Top 5 Browser Compatibility Issues in CSS For Developers in 2021 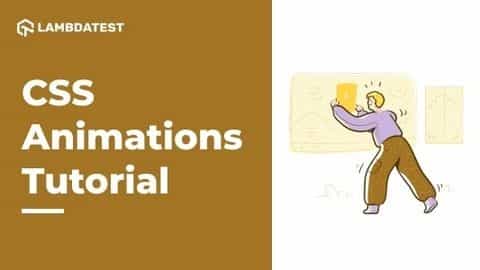