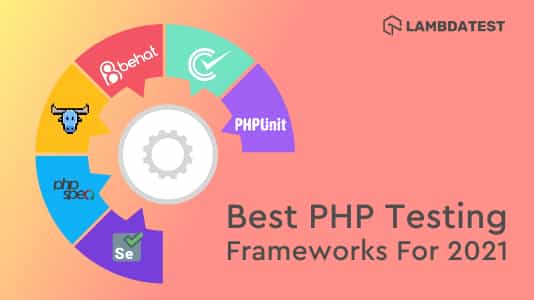 A framework is a collection or set of tools and processes that work together to support testing and developmental activities. It contains various utility libraries, reusable modules, test data setup, and other dependencies. Be it web development or testing, there are multiple frameworks that can enhance your team’s efficiency and productivity. Web testing, in particular, has a plethora of frameworks, and selecting a framework that suits your needs depends on your language of choice.

If you want to pick the best framework, no matter whether its a new PHP framework or a well-known JavaScript framework, it has to be structured in such a manner that it provides various benefits as listed below-

A framework is an integral part of testing, and hence it is crucial to select the framework type based on our project requirement. First of all, to set up a framework, one must know each framework’s pros and cons. Only then it will be easy to list out our requirements and select specific automated testing frameworks. Once you have an idea about your needs, you can go ahead and choose one amongst the best PHP testing frameworks.

To help you in doing that, let’s take you through the best PHP frameworks in detail.

Several frameworks have been and are being used for development and testing purposes. But each one is unique in its own way and offers unique features. We will discuss how the best PHP testing frameworks approach test automation and what pros or cons they all offer. Without further ado, let’s look at the best PHP frameworks.

As promised above, we will now analyze each of these PHP testing frameworks in detail to help you make the final choice.

PHPUnit is the most commonly used PHP testing framework, and it is considered a programmer-oriented framework. It is mostly preferred for unit testing. It was developed by Sebastian Bergmann and is an instance of the xUnit framework architecture.

There are a few prerequisites that must be satisfied before installing this framework. Firstly, you need to install a higher version of PHP for installing the latest version of PHPUnit. As per their official documentation, it is recommended to use PHP version 7.3 for PHPUnit 9.3, the latest PHPUnit version. Below are the steps to install PHPUnit in your system.

Step 1: PHPUnit can be installed by downloading the PHAR (PHP Archive) from the below link
https://www.php.net/phar

PHAR has all the required PHPUnit dependencies bundled in a single file.

Step 2: You may also install Composer which manages all the dependencies in the project.

PHPUnit is considered one of the best PHP frameworks due to several reasons. Listed below are some of the advantages of using PHPUnit for automated testing-

Codeception is one of the most widely used PHP testing frameworks, and it has gained immense popularity because of ease of use and its ability to maintain the code modules. It supports three levels of testing, namely acceptance testing, functional testing, and unit testing. It provides multiple modules that can be utilized for testing purposes in a single framework.

Let us see the steps to install Codeception and the advantages of using this automated testing framework.

Before you install Codeception, you need to know if the prerequisites are met. You will need-

Once you have met the prerequisites, you need to follow the below-mentioned steps to proceed further-

Step 1: Install composer which is used for managing the dependencies in PHP. It helps in declaring the libraries to be used in the project and manages them.

You may install using a setup file or you can even do it manually. You can install the composer from their official website.

Step 2: Install PHAR, and you may install it from the official website of Codeception.

Storyplayer is an open-source PHP testing framework which is used to perform end to end testing. It is best suited for API automation testing and testing web applications. It provides multiple programming language support, which is one reason behind its popularity as one of the best PHP frameworks.

Step 1: As it is a PHP testing framework, it requires PHP to be installed before setting up this framework. Currently it supports only Apple OSX Yosemite and Ubuntu Linux Desktop 14.10.

Step 2: It is also required to add some extensions like CURL, JSON, OpenSSL etc. You can read further in their official website.

Selenium is the one of most popularly used automated testing frameworks that has been extensively used for testing web applications. It has four main components namely-

These components are designed for specific purposes, and the selection of the component purely depends upon our testing requirements.

To work with Selenium, you need to set up the latest version of PHP. Also, it is required to have Composer, which manages all the dependencies for our project.

How To Overcome The Limitations Of Selenium With LambdaTest Selenium Grid?

LambdaTest offers a great platform to run your automation scripts on a cloud Selenium Grid and achieve faster test execution. There are endless benefits of running the tests in the LambdaTest grid.

Once the tests have been executed, you can view the logs and other builds related information in the Automation dashboard. Thus, running the tests in LambdaTest Grid improves the execution speed and also provides efficient results.

Behat is a Behavior Driven Development (BDD) framework for PHP. It was built entirely for PHP, and it has many core PHP modules in it. The code is usually written in simple English language, easily understandable by all the stakeholders in the project. The BDD structure usually contains the Context, Action, and Outcome, and this format is called Gherkin. Below is a simple example of writing tests in the Gherkin language.

These scenarios are written in a file with extension features. For example, loginTest.feature in the above case. Behat is an executable that is used to run the tests from the command line for testing the application exactly similar to the execution of feature files.

Step 2: Composer which manages all the PHP dependencies for the project.

Step 3: If you don’t have a Composer, you can easily set up the framework by downloading the latest version of behat.phar.

Atoum is another one of the popular PHP testing frameworks which is used for Unit testing. It is very simple and easy to implement, and it is amongst the new PHP frameworks you will come across. Also, it’s among the best PHP frameworks. It provides various inbuilt execution engines such as the inline engine, isolation engine, and concurrent engines. Those are used to execute test cases one by one, one after another test case each time in a new process, and run all the test cases in parallel simultaneously in different processes separately. Atoum also provides advanced features that help to mock the build, minimizing the dependencies for running the tests.

Now let us see the steps involved in the installation of the Atoum framework along with its advantages.

Before installation, make sure you have the latest version of PHP installed in your system. You can set up an Atoum framework by either one of the ways.

Step 1: By using Composer which can be downloaded from their official website.

Step 2: By using a PHAR file which can be downloaded from this link.

Step 3: By cloning from the Git repository

SimpleTest is a PHP testing framework that could be used for unit testing. Apart from unit testing, it is also used for website testing and for mocking objects for PHP web development. This framework’s unique feature is that it has an inbuilt web browser that allows users to navigate to different web pages and perform testing.

Step 1: Setting up the SimpleTest framework requires the latest version of PHP to be installed in the system.

Step 2: Once it is done you may setup the framework by downloading from their official website.

Interesting Read: How To Run Junit Tests From The Command Line

Phpspec is another Behavior Driven Development (BDD) framework that is used to write and execute tests written in PHP. It is well-known for driving the design according to the specifications provided by the developer.

A BDD framework contains specifications written in the English language, which helps in understanding the tests. It describes the behavior of the application using Gherkin language.

Step 1: Before installing Phpspec, you need to install PHP 5.6 or 7 in your system.

Step 2: Once done, you can install using Composer, which automatically manages all the project dependencies. While installing Composer, make sure that the autoload settings of the composer are correct. Phpspec won’t be able to detect classes unless the settings are correctly specified.

Step 3: Once you have finished installing Composer, you can install Phpspec using the following command-

After everything is done, you will notice that all your dependencies have been successfully installed in the vendor folder. And the executable file will be found in vendor/bin/phpspec.

Peridot is another one of the widely used PHP testing frameworks, which is a type of BDD framework. Some developers even claim that it is one of the best PHP frameworks available for a BDD approach. The tests are written in describe-it syntax in Peridot, which makes it simpler to read, understand, and maintain. It is considered one of the fastest among the PHP framework as it loads and runs the test suites quickly and runs them concurrently.

Step 1: You can easily install this using Composer which will manage our project dependencies.

Step 2: It can also be installed manually by downloading the PHAR.

Kahlan is a unit and behavior-driven PHP framework that uses a describe-it syntax similar to peridot. Without any PHP extensions, we can directly stub or monkey patch our code. It is also an open source framework, which makes it highly preferable for testing purposes.

So, what is a describe-it syntax?

Kahlan uses describe-it syntax for easy maintenance and understanding of the tests. The “describe” keyword usually contains the method specs. The “it” keyword” contains the code to be tested, which should be kept short and clear.

Step 1: Installation of Kahlan requires PHP of version more than 5.5 to be installed in the system. If code coverage analysis is required, phpdbg or xdebug is also required. Xdebug is a PHP extension which could be used for debugging purposes.

Step 2: As a PHP framework it is always recommended to install using Composer as it helps in managing the project dependencies.

You can also manually set up the framework by referring to the official website of Kahlan.

In this blog, we have walked you through the importance of PHP frameworks, different types of PHP frameworks, steps to set up, and the advantages of using the framework. Depending on the requirements, you can choose the best PHP frameworks. These PHP testing frameworks can be used for both PHP web development as well as testing purposes. Thus, implementing the correct framework would help you to perform testing effectively.

We hope you now have a clear idea of selecting a suitable PHP framework for your project. And now, we would like to hear from you – have you implemented any other PHP framework that has proved useful?

If you found this blog valuable, we’d be grateful if you could share it on your LinkedIn or Twitter.