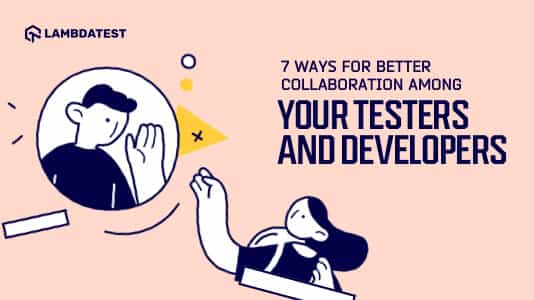 Do you know what’s critical for success? I think you’re going to say hard work. Well, that’s only partially true. Having worked as a software tester for a significant time, I can say that collaboration among your testers and developers is extremely important for success. Miscommunication between your tester and developer can further affect the release date of your web applications. Nowadays, most companies have adopted an agile framework to eliminate silos in their work environment. But even though this approach breaks down many departmental barriers, collaboration might not be the strongest.

When developers and testers collaborate, they are able to communicate better. Proper communication helps to ensure that there is a better understanding of the requirements between the two teams resulting in faster project delivery. But how does a company achieve that? How can testers effectively collaborate with developers? This is exactly what we are going to address in this article. So, let’s dive right in!

From what I have observed, there is always a tiny bit of animosity between the QA and development teams. But that doesn’t mean it has to be this way always! It’s no secret that both teams can make or break a project. Thus, breaking down the invisible walls can only turn out to be good. After all, the common goal of both is to have an end product free of errors. On that note, let’s take a look at some effective tips that can help testers and developers collaborate efficiently.

1. Begin Testing From an Early Stage, Shift-Left My Friend!

Leaving cross browser testing for the last is not what agile is about. Traditionally, the role of a tester might not even begin before the developers are done with theirs. However, if you wish to deliver robust web-applications faster, you need to incorporate testing your SDLC as early as possible. Shift-left testing is a methodology that emphasizes on testing as early as the requirement gathering phase. That way, testers can think of possible scenarios where they may encounter bugs.

Now, imagine that the developers know what kind of tests the QA team will perform on each feature. Don’t you think it will help them become better at what they already do? If your testing team participates in the development stage, they can see which CSS and JavaScript properties are your developers incorporating and can advise them over any cross browser compatibility issues that may arise because of it. Also, testers can parallelly get to work by beginning testing the codes. This can save a lot of time and prevent developers from making mistakes. After all, the sooner you detect & fix bugs, the more time, money and resources you end up saving.

2. Keeping Up To Date With Each Other’s Activities

Having cabins within walking distance and communicating face to face conversations about your progress with each other can certainly help to remove the communication gaps. However, this type of conversation might not always be possible. In the case where development and testing team members are working from different locations, you have to come up with alternatives. Using collaboration tools can help you share updates and keep in line with the end goal.

There are plenty of applications for managing workflow that displays the progress of different tasks regardless of the location. Thus, it establishes an easy route for communication between different teams. For instance, Trello, Slack, Pivotal Tracker and Asana are among the top workflow management apps. This way, employees in different locations can be on the same page when it comes to working.

LambdaTest being the fastest-growing cross browser testing cloud makes sure that you are able to collaborate better among your team through our third-party integrations to project management tool, CI/CD tools, codeless automation tools, and more.

In many organizations, code-reviewing is an activity where there is hardly or little participation from the testers. However, that shouldn’t be the case.!! Understanding the codebase and its working is not exclusively a developer’s task. Testers have to design tests probing the correct areas. Learning from each other makes this task easier. Moreover, testers can also easily spot errors. Thorough knowledge of each other’s equipment and tools will further benefit both testers as well as developers.

For example, your development team may not realize the struggle behind cross browser testing of a web application. For them, if the code works fine over their favorite browser be it Google Chrome, Safari, or Mozilla Firefox, it would work well in other browsers too. However, the bitter-truth can only be relayed to them by your testing team and the sooner it is relayed, the better. Consequently, a developer can benefit from understanding the QA process and test suite. It helps write an easy-to-test and stable code.

Having more knowledge and being able to see the bigger picture from both the group’s perspective increases productivity, positive collaboration, and superior final product.

4. QAOps: A Key To Continuous Testing

QAOps is an emerging methodology for modern-day release cycles were the QA is expected to be synchronous with the DevOps team. The idea is to perform Continuous Integration + Continuous Delivery + Automation Testing altogether. So you might have a CI/CD pipeline, which is regularly committing changes to the code in one environment to another through Jenkins or your favourite CI/CD tool, meanwhile, you have your Selenium test automation scripts configured as jobs which are ready to be fired up as and when the code is committed.

That way, both testing, and development are assimilated simultaneously in a cyclic manner. Testers won’t have to wait for the developers to finish their tasks and can work with each other to make sure that they have a robust agile testing strategy ensuring the testing is being done in an iteration, development phase, product deployment, and production support.

If you want to reduce the regression testing efforts and deliver products multiple folds faster, you need automation testing, period.!! Avail the benefits of automation wherever possible. Automation testing can help your testing team save time and effort over repetitive test cases, allowing them to find more critical test case scenarios with their added bandwidth.

Nowadays, you get numerous automation tools over the internet. If you are trying to perform automated browser testing for your web-application then a Selenium Grid is your best call. Similarly, for mobile applications, you can work with Appium.

One excellent way to ensure better collaboration between testers and developers is to conduct knowledge transition sessions around automated unit testing. That way, your testers can help your developers perform unit testing faster by leveraging automation testing frameworks.

Not to mention, your testers and developers will be more appreciative of each other’s work.

7.Know What The Developers Have Tested To Prioritize Your Test Scripts

The tester should have a fair idea about the testing efforts done by the developers. This would help testers identify which features have already been tested by the developer, either manually or by running a script. This would further help them distribute the bandwidth of their testing efforts by identifying which areas have already been covered and which needs more attention. Don’t get me wrong !! By no means, am I encouraging you to not test what has already been tested by the developers? Rather, I am asking you to prioritize your testing accordingly to what has been validated, and to what end!

A lot of times testers think their job ends when they report the bugs but that isn’t the case! At times due to the fast-paced environment and heavy workload under agile, it is no surprise if your developers end up prioritizing the enhancement moreover your reported bug. It happens, and you can’t blame the developer saying I logged a bug and you didn’t work on it. Think about it from their perspective, other than your reported bugs, a developer is also supposed to work over product enhancements. So, it becomes your responsibility to keep following up with them over your reported critical bugs.

Can a project ever be successful if you keep all your hopes on a single entity? Of course not! Similarly, the development or testing team alone is not enough to help a company soar. When we speak of agile, there is no we or them. It’s an entire team working towards making the product as flawless as possible. And this team comprises both developers and testers. So, what are you waiting for? Build collaboration between testers and developers and bring the best out of your business! Cheers and happy testing! 🙂 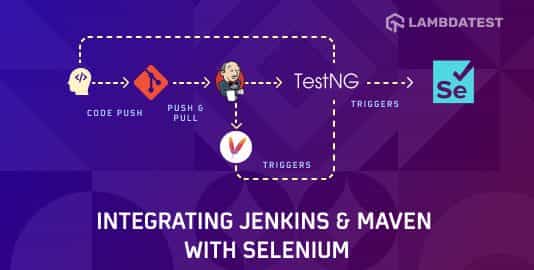 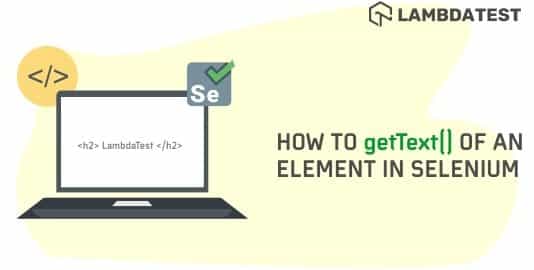 How To Get Text Of An Element In Selenium?