How To Execute JavaScript In Selenium PHP?

There are cases where test scenarios may fail unexpectedly with Selenium commands (e.g., click operation on the button web element does not result in a click even though the button is enabled). Such issues are more pertinent when creating an XHR request or when attempting to access another frame. For overcoming such issues, you can execute JavaScript in Selenium through the JavaScriptExecutor interface.

If locating or performing the required operations on the web elements does not work as expected with Selenium locators like XPath, Name, etc., the JavaScriptExecutor interface can be used to tackle the problem. JavaScriptExecutor is an interface that is available for all the languages that support the Selenium framework, including PHP.

Since the JavaScriptExecutor interface can interact with the DOM elements, it can be used instead of Selenium WebDriver APIs like findElement and others. Along with handling tricky XPaths, this interface is also useful in finding hidden web elements on the page.

JavaScriptExecutor in the Selenium WebDriver interface for PHP provides “executeScript” & “executeAsyncScript” methods (or commands) using which developers can execute JavaScript code in a synchronous & asynchronous way.

JavaScriptExecutor in Selenium interface has two abstract methods, which are the same irrespective of the Selenium language binding (i.e., PHP, Python, Java, C#, etc.) being used. In this Selenium WebDriver PHP Tutorial, we focus on executing JavaScript in Selenium PHP.

Here are the two methods provided by the JavaScriptExecutor in the Selenium interface:

JavaScript is synchronous and provides features like callbacks, promises, etc., for incorporating asynchronous event-handling in the project. The executeScript method executes the JavaScript code in the context of the currently selected frame or window.

The script fragment that is used in the executeScript method is executed as the body of an anonymous function. In Selenium PHP, executeScript can be used effectively for operations such as clicking a web element on a web page, fetching information about the web page such as title, domain info, URL, and more.

Within the script, a document should be used when referring to the current page. You can also pass complicated arguments to the method. Local variables used in the script cannot be used outside the body of the script.

The script can return value using the return statement. Here is the list of data types that can be returned by the script:

The script can also take arguments that are a combination of different data types such as Boolean, String, WebElement, and more. An exception is thrown if the arguments do not meet the criteria described above.

The syntax of the executeScript method to execute JavaScript in Selenium in a synchronous manner:

It is important to note that Asynchronous JavaScript does not mean the same as multi-threaded, as JavaScript is generally single-threaded. Like its synchronous equivalent, the script fragment in executeAsyncScript also executes as the body of an anonymous function. Variables names can be added in the input value field, and the ‘return’ keyword is used for storing the return value.

Here are some of the common scenarios where asynchronous JavaScript can be useful:

Asynchronous JavaScript should be used in scenarios where the application has to wait for a ‘certain’ duration before performing further action. This is where the executeAsyncScript method can be used for triggering sleep in the browser under test.

This can be achieved in Selenium PHP by opening the required web page in the browser and making the application wait for a ‘certain time duration’ (e.g., 5 seconds) before it can perform further action. This makes executeAsyncScript similar to executeScript (i.e., synchronous execution), as the script still waits for the existing command to complete before it can proceed to the next command.

Consider a scenario where input data has to be fetched from the page on which Selenium web automation testing is being performed. Rather than fetching the data from the destination in a synchronous manner (using the executeScript method), it can be fetched via an AJAX request.

Once the fetch request is complete, a callback can be fired to indicate the completion of the request. This is where the executeAsyncScript method can be useful in synchronizing the test with an AJAX application.

All modern browsers support the XMLHttpRequest (XHR) object. The object is used for updating the contents on a web page by requesting data from the web server, that too behind the scenes (i.e., the end-user will not notice that the data is being fetched from the server).

The request for injecting the XMLHttpRequest while waiting for the results can be made by invoking the executeAsyncScript method.

Example of the executeAsyncScript method to execute JavaScript code in Selenium in an asynchronous manner:

Since the callback is always injected in the executed function as the last argument, it can be referenced as arguments[arguments.length – 1] as seen in the example snippet shown above.

For demonstrating the executeScript method in Selenium PHP, we consider the following test examples:

The test URL is https://www.lambdatest.com/blog/, and the JavaScriptExecutor method should be used for getting the domain name, URL, and Window Title.

Lines (19-25): As the tests are executed on LambdaTest’s cloud-based Selenium Grid, the capabilities are generated using LambdaTest Capabilities Generator.

Lines (34): The URL containing the address of the Selenium Grid on LambdaTest [i.e., @hub.lambdatest.com/wd/hub] and the generated browser capabilities are passed to the create method.

Lines (54 – 55): The document.domain command in JavaScript is used for retrieving the domain name (i.e., in our case, it is https://lambdatest.com).

The command is passed to the executeScript method for execution which in turn returns a String that signifies the domain name.

Lines (59 – 60): The window.location.href command in JavaScript is used for fetching the URL details of the page. In our case it is https://www.lambdatest.com/blog/

Instead of window.location.href command, the document.URL command can also be used for retrieving the URL of the current page.

Lines (63 – 64): For getting the window title, document.title command in JavaScript is passed to the executeScript method.

The PHPUnit framework will be available in the vendor\bin folder as we had downloaded the same using the composer command. Run the command vendor\bin\phpunit on the terminal for executing the test:

Here is the execution snapshot, which indicates that the required details of the web page were fetched successfully using the executeScript method.

The executeScript method can invoke multiple arguments like arguments[0], arguments[1], etc. In the example shown below, we have invoked the click method using the JavaScript command instead of using the traditional Selenium WebDriver API.

The test scenario is below:

Lines (55 – 59): The web element with name ‘li1’ and ‘li2’ are located using the name property. For performing a click operation on the WebElement, the executeScript method takes the reference of the element as arguments[0] along with the method to perform on the element [i.e., In this case, it is click()].

In the snippet shown above, $elementli1 is arguments[0], and the click method is applied to that element. The same sequence is also applicable to $elementli2.

You can also add content to the element with ID – sampletodotext by setting the value using the JavaScriptExecutor method. The issue with this approach was that through the value was being assigned to the sampletodotext, the new entry (in the ToDo list) used to show up as Blank.

Hence, we used the traditional Selenium method (i.e. sendKeys) instead of the executeScript method.

Lines (73 – 74): The element addbutton is located using ID. The click() method is performed on the addbutton for adding the newly added item to the list. 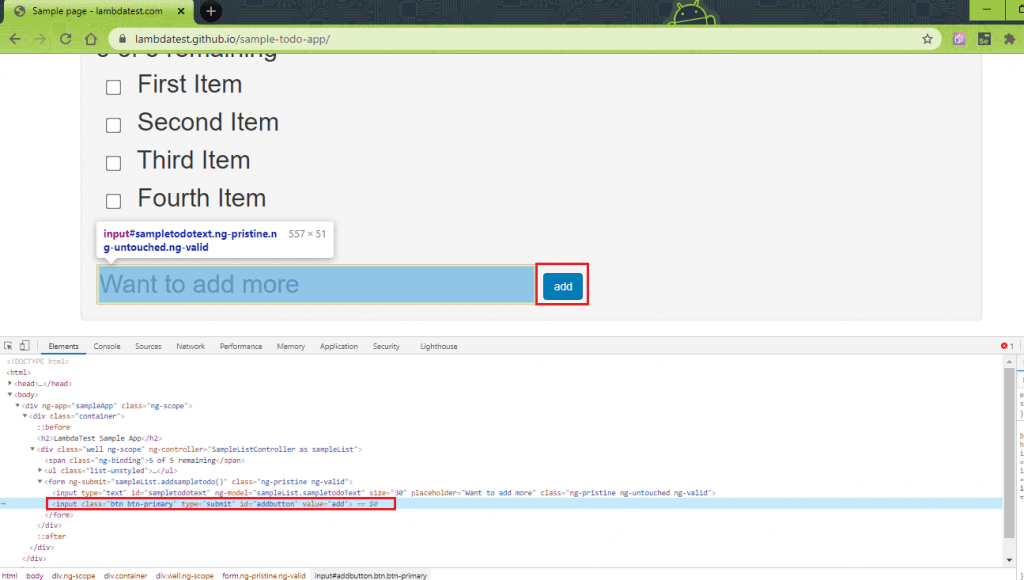 Lines (76 – 82): An explicit wait of 10 seconds (with condition checking frequency set at 500 ms) is triggered to check if the new item is successfully added to the list. Assert is raised if the item count is zero.

Run the following command on the terminal to execute the test:

As seen in the execution snapshot, the first two items are checked, and a new item has been successfully added to the list. 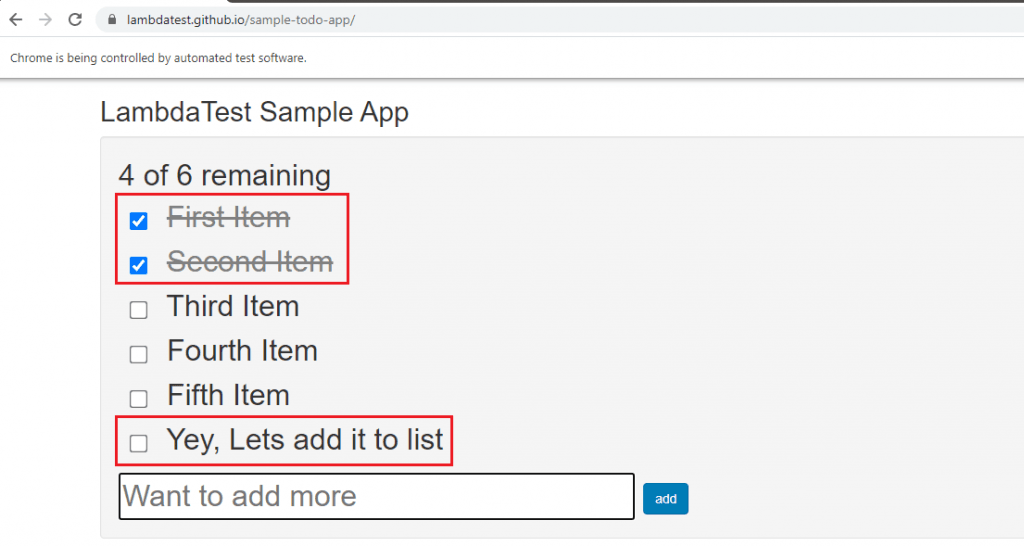 Become an expert in PHP, you can acquire a benchmark industry certification specializing in core PHP programming skills and expand your opportunities to advance your career in PHP automation testing.

The overall test scenario is the same as the one using in the demonstration of the executeScript method used in Selenium WebDriver methods. The executeScript method blocks further actions that are performed on the browser (as it executes synchronously) whereas, in executeAsyncScript, a callback is sent to the server and is executed once the script is done. This essentially means that every instruction in the script is executed by the browser and not at the server.

Before the executeAsyncScript method is used to execute JavaScript in Selenium, it should be noted that async in executeAsyncScript indicates the mechanism used for signaling the completion of execution (i.e., via a callback). As stated in this StackOverflow link, the JavaScript code is still executed asynchronously with respect to the Selenium WebDriver.

For demonstrating the usage of the executeAsyncScript method that lets you execute an asynchronous piece of JavaScript, we perform a sleep of 5 seconds in the browser under test.

Lines (74 – 76): The window.setTimeout method in JavaScript is executed in async mode to wait for a specified period (i.e., 5 seconds).

The execution time is logged by starting the timer before the executeAsyncScript method is triggered and stopped after it has been executed.

The important point to note is that the next function following the executeAsyncScript method executes after $asyncwaittime (i.e., after 5+ seconds), thereby blocking the Selenium WebDriver control flow until the operation in executeAsyncScript is completed.

Run the following command on the terminal to execute the test:

Here is the execution snapshot, which indicates that the application waits for a period of 5 seconds (i.e., $asyncwaittime) before further action is performed.

Selenium is an open-source suite of tools used for testing web-based applications. The Selenium WebDriver can execute JavaScript that runs through Google Chrome, Firefox, or Internet Explorer. 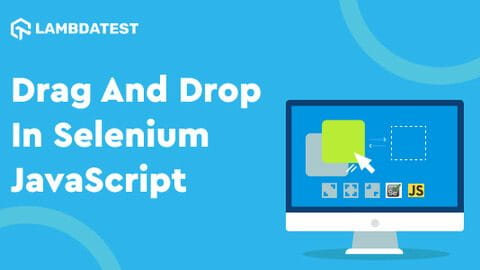 How To Implement Drag And Drop In JavaScript Using Selenium? 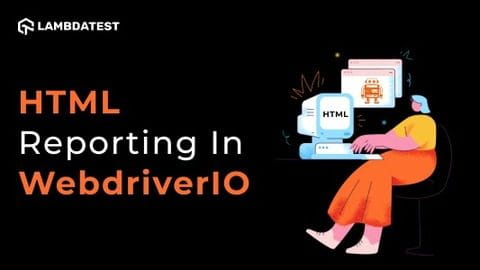 How To Generate HTML Reports With WebdriverIO? 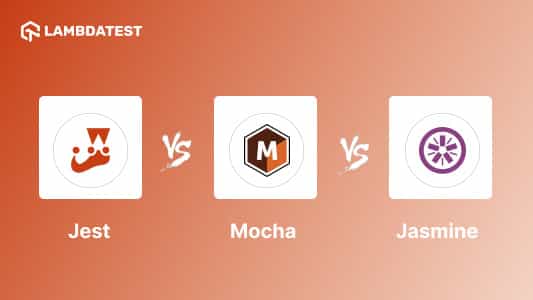