A Definitive Guide To Regression Testing

The goal of software testing is to find and fix bugs. However, after a bug gets fixed, other bugs often ensue. This is when Regression testing comes into play. It ensures that additional problems do not arise after a bug fix or a code change. Hence, every software product company performs Regression testing.

In this article, we look at what is Regression testing, its importance and types, and how to perform it.

Why do we need Regression testing?

When software developers fix a bug, add new functionality, or modify an existing feature or functionality, they must change the program code. Even a slight change will likely result in a plethora of new bugs. In such a scenario, a Test Engineer can reveal and pinpoint undesirable side effects through Regression testing. A properly executed regression test suite is vital. It is imperative that after a bug fix, the original product does not stop working.

The below graph depicts the importance of the Regression test: 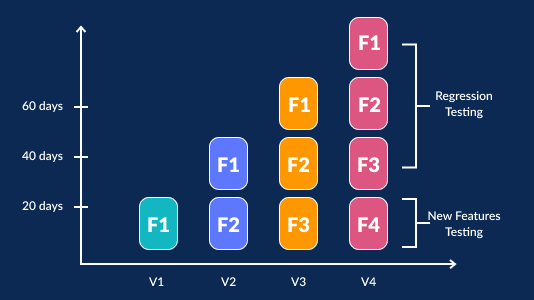 When to perform Regression testing?

When new features or enhancements are deployed to an existing codebase or application, Regression testing is required. It ensures that any new functionality or update to an existing application works properly without any bugs or defects. Developers and testers often struggle to trace every code thread, with significant chances of code incompatibility issues. As a result, executing Regression tests of their codebase (or application) allows them to detect defects earlier and ship applications with fewer risks.

Depending on your Software Development Life Cycle (SDLC) and the new feature or update you aim to deploy, you can implement various types of regression testing. However, it is essential to understand the several regression testing types to choose the right one.

Below are the different types of regression testing –

Selective Regression testing analyzes the impact of existing code and the effect of both new and existing code. Common elements like variables and functions are incorporated into the application to identify quick results without affecting the process.

Test cases are created based on the requirements of a progressive regression test. When there are only minor product improvements, the new test cases are designed without affecting the existing code of a product.

Some minor or significant changes might have a massive impact on the product. Complete Regression testing is used in this instance when there are significant modifications to the current code. It aids in the repair of any modifications made during the testing process.

When new code is added to an existing codebase, partial Regression testing is conducted. This aids in the discovery of critical bugs in existing code and allows them to be tested without affecting the system.

Re-test all Regression testing is the process of re-executing all the test cases to ensure that there are no bugs due to code changes in an application. This type of testing needs immense effort from the QA front.

Differences between Re-testing and Regression testing

If you are a beginner in the test automation domain, these two-term Re-testing, and Regression testing might sound similar. However, both are different from each other.

Re-testing is the continuous process of testing specific test cases to ensure that the bugs are fixed and the web product’s functionality works fine in the final execution. The same set of unit tests is repeated in re-testing to verify the code’s functionality. In other words, re-testing is executing the same manual or automated tests to validate that the new build is working flawlessly.

Regression testing is a technique to verify the new build whenever any code commit takes place. In this process, a tester’s job is to verify that no new bugs are included in the code due to software modification and adjustments. Once the Regression test suite is developed, you can automate it using an automation testing tool. However, this does not apply to re-testing.

Let’s look at the detailed comparison of Re-Testing vs. Regression testing

The software market growth relies heavily on the success of Regression testing. Besides functional tests, Regression testing must be performed at each stage to ensure application stability. DevOps teams can utilize Regression testing in their software development lifecycle and ensure their existing code isn’t affected by the newly added updates and features.

Below are a few advantages of Regression testing:

If you want to make the most of your Regression test suites, it is essential to plan a proper strategy by keeping certain factors in mind. Here are some ways to help you create a winning Regression testing strategy:

Boost productivity and reduce time/efforts spent on running tests with the help of automated testing. Using automation scripts, it is possible to perform tests much quicker and in a more effective way.

End-to-end testing is crucial for running your application smoothly across all browsers and operating systems. However, it has been observed that a substantial number of defects leak into an application during the deployment stage. This could be critical from the customer’s standpoint since it could increase turnover and create a terrible customer experience. Therefore, it’s vital to select the test cases wisely based on the customer requirements.

Below are the steps to select regression test cases –

How much Regression is required?

The amount of Regression required solely depends on the extent of an application’s new features or updates. If the fix or upgrade is major, extensive Regression testing of all application test cases is required. Since the update is significant, the test cases will also be huge; therefore, you can perform automated testing of all repetitive test cases. For the newly added functionality, the test suites require constant upgrades.

The next step is identifying appropriate Regression test cases in order to cover all of an application’s functionality. However, when the app’s changes are substantial, the most effective approach is to find relevant test cases based on the upgrades and the affected sections of the application. It will help you in cutting costs, time, and effort.

How to perform Regression testing? 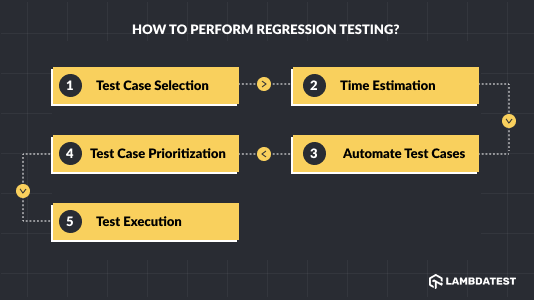 Below are the phases involved in Regression testing –

Here is an example of Regression testing needed for the Tesla website. This company generates billions of dollars in annual revenues from its Website. Hence their websites must always be up and running – functionally, reliably, and with good performance.

On the front page of Tesla.com, you can see all Tesla’s products.

When Tesla releases their next product, i.e., the Cyber Truck, the developers at Tesla will add a new entry to the Website, most likely next to Model Y. But a lot of care needs to be taken to ensure that even though new UI flows are added to a new “Cyber Truck” entry on the main page, the rest of the product UI flows continue to work functionally as before. A Regression test suite is executed for this purpose. These Regression test cases can be manually executed or automated using a prevalent test automation framework called Selenium.

Let’s say one of the Regression tests fails; this means that an existing function of the Website broke while adding a new product flow. This bug needs to be immediately logged and fixed. This Regression test suite should be executed every time a minor or a significant UI flow addition/changes are made to the Website.

Here are some tools that can be useful for creating and executing Regression tests. However, the requirements of each product should be thoroughly studied before deciding which ones to use.

Selenium is an open-source web automation testing tool to test websites and web apps. It is considered one of the top automated Regression testing tools for web application testing. Selenium supports different browsers and platforms for automated browser testing.

Watir is a web application testing framework in Ruby. It is an open-source Ruby library for automating web browser tests. Watir is a testing tool that is used to automate Regression test suites.

Serenity BDD is an open-source framework that enables you to write higher-quality automated Regression and acceptance tests. Serenity allows for more flexible and easy-to-maintain tests. It also generates extensive test results and keeps you informed on how much application is being tested.

Silk Test is an automated functional and Regression testing tool for enterprise software applications. It aids with regression, cross-platform, and localization testing of all mobile application types like web, native, and hybrid apps.

Regression testing helps uncover bugs while introducing new features or updates in an existing codebase and facilitates mitigation of app crashes and performance bottlenecks. However, while running a Regression test, a tester faces different challenges.

Shown below are a few of the challenges faced by testers –

Regression testing helps identify bugs ahead of the deployment deadline. However, as your application becomes more complicated, the number of test cases will expand. As a result, you need a cloud-based testing infrastructure that can scale as your testing requirements grow.

Test execution and orchestration platforms like LambdaTest help you achieve that. It offers a cloud-scalable infrastructure of 3000+ real browsers, devices, and OS combinations for your test automation needs. With LambdaTest, you can harness the power of the online Selenium Grid to execute thousands of parallel tests in a jiffy, thereby cutting down your test execution time and getting faster feedback on code changes.

In addition to web testing, you can perform mobile app testing on an online device farm of 3000+ real Android and iOS devices.

In short, Regression testing is to be executed when any change -big or small is made to code.

Even though Regression testing consumes vast amounts of resources, it saves your effort and time. It eases the lives of devs and testers in their agile software development lifecycle and yields maximum output.

Don’t forget if you think Regression testing is complex; there are always products like LambdaTest to help you. You can also kick start your Visual regression testing journey with LambdaTest for pixel-by-pixel comparison and identify Visual UI mismatches.

What are the 3 techniques of Regression testing?

The following three techniques can be used for regression testing:

What is Regression testing vs UAT?

In UAT, the question to be answered is: Will the user be able to, or even want to, use the product? UAT has little to do with the actual functionality of the software. Before UAT is performed, all features and functionality are largely completed, tested, and approved by the organization. 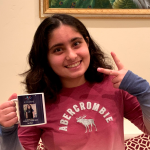 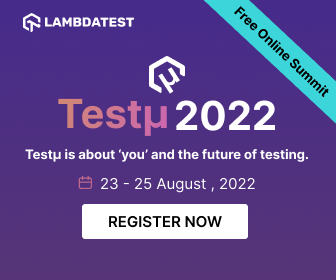 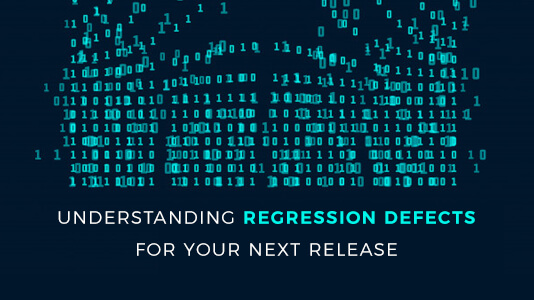 Why Understanding Regression Defects Is Important For Your Next Release 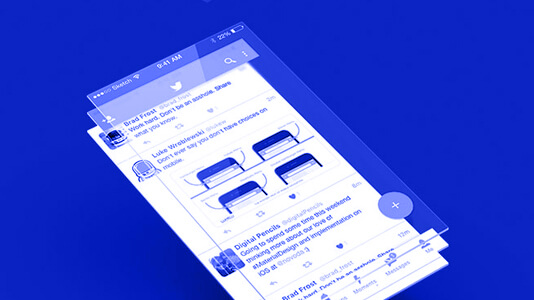 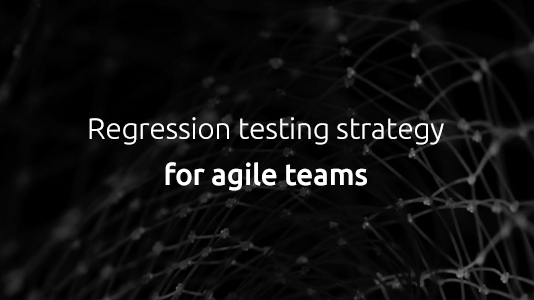