Python is the fastest-growing programming language in 2020 as per the Developer Survey by StackoverFlow. In overall ranking Python ranks on 3rd most loved languages. One of the several reasons for the popularity of Python is the extensive support of test automation frameworks. Most of the popular Python frameworks are compatible with the Selenium test automation framework and used for Selenium Python testing & cross browser testing

Here are the top Python testing frameworks in 2020 to realize your Selenium test automation needs.

PyTest is an open-source Python web automation framework that is primarily used for unit testing. This particular Python testing framework in 2020 is scalable as it is useful for writing simple automation tests as well as complex functional tests for applications & libraries. It is easy to get started with PyTest. It is compatible with Python 3.5+ and PyPy 3.

Test suites written using PyTest are more compact as a lot of boiler-plate code is not required and there is no requirement to include tests into large test classes. Unlike the default Python testing framework 2020 which mandates tests to start with test_ (or end with _test), there is no fixed test case nomenclature in PyTest. This is because PyTest has built-in features that support auto-discovery of test modules and functions.

There is no need to remember self.assert* names due to the introduction of the useful feature of assert rewriting that helps in providing detailed information on failing assert statements.

Here are the details about the PyTest project:

You will just need a Python IDE for development and Python Package Manager for installing PyTest.

There are a number of advantages of the PyTest framework, major ones are below:

Cons of PyTest as a Python testing framework

Is PyTest The best Python Testing Framework For You?

You can choose PyTest over the default Selenium Python framework i.e. unittest in case you are developing complex functional tests. Fixtures, Classes, as well as Parameterization can be extremely handy for automation test development. 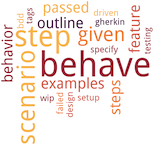 Usage of a BDD framework enables better communication between the team members as there is increased collaboration between engineers, managers, quality analysts, business development managers, and more. It is relatively easy to get started with a behavior-driven Python testing framework like Behave if you have working knowledge about other BDD frameworks such as SpecFlow, Cucumber, Cucumber-JVM , etc.

As Behave is a BDD framework, it is fundamentally different from other Selenium Python testing frameworks such as unittest (or PyUnit), PyTest, etc. The latest version of Behave is 1.2.7.dev1

Here are the details about the Behave framework:

Installation of Behave requires Python above 2.7.14. Prior experience with any of the BDD tools can be handy to get started with the Behave framework.

Here are the advantages of using the Behave framework for test automation:

Below are some of the major cons of using the behave framework in Selenium test automation:

Is Behave The Best Python Testing Framework For You?

Behave framework is suited for web testing as test scenarios can be developed using simple English language. On the other hand, behave is not ideal for integration testing as the verbosity can lead to unnecessary complications of the test scenarios.

Many developers prefer pytest-bdd, the BDD library for pytest.runner as it uses the good features available in pytest hence suited for BDD testing. 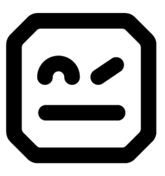 The Python testing framework is operating system and application independent i.e. the same implementation is compatible across different platforms namely – Windows, Linux, and MacOS. The syntax of Robot framework is easy to understand as it uses human-readable keywords. The capabilities of Robot framework can be extended by libraries that are implemented in Selenium with Python . It has a rich ecosystem consisting of libraries and tools developed as separate projects.

Here are the details about the Robot framework:

Robot Framework can be used if you have Python version 2.7.14 or higher installed. Python Package Manager (pip) command is used to install the Python testing framework.

Here are the advantages of using the Robot framework for Selenium test automation:

Below are some of the major cons of using the Robot framework:

Is Robot The Best Python Testing Framework For You?

Due to its rich set of libraries and easy syntax, Robot framework is easier to use when compared to PyUnit (or unittest) and PyTest. You should choose Robot framework if we are looking for an ideal Python automation framework for ATDD. 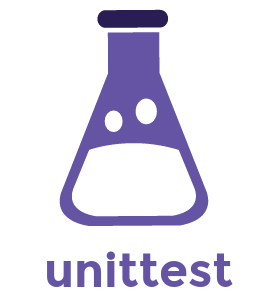 As the unittest Python testing framework is available out of the box, many developers who are getting started with Selenium test automation prefer the unittest framework. Test cases follow a particular nomenclature where tests either start with test_ or end with _test.

TestCase is the base class that contains the assertion methods, SetUp, and TearDown routines. Number of testcases can be grouped together to form a TestSuite class and build customized test runners.

As PyUnit framework is available out of the box with the Python testing framework, it does not require any additional package installation.

Pros of PyUnit (or unittest)

Here are some of the advantages of the PyUnit framework:

Cons of PyUnit (or unittest)

Here are some of the major shortcomings of the PyUnit framework:

Is PyUnit The Best Python Automation Framework For You?

As PyUnit (or unittest) is the default Selenium Python testing framework that is shipped with Python, most developers start their automating testing with Python journey with PyUnit. Too much boilerplate code and support for too much abstraction acts as a major hindrance in using the Python Testing Framework for large projects.

Learn how to use PyUnit for Selenium Python testing. 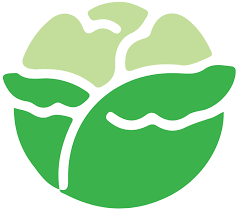 Lettuce is a Python testing framework that facilitates BDD testing. It draws its inspiration from Cucumber (that was designed for Ruby). The release names of Lettuce are inspired by green stuff. The latest version of Lettuce is 0.2.23 and is termed Kryptonite.

This particular Python testing framework is open-source and hosted on GitHub. As mentioned on their official website, Lettuce was developed to make testing easy and funny.

Here are the details about the Lettuce framework:

Lettuce can be installed using the Python Package Manager (pip). The prerequisite is Python 2.7.14 (or higher).

Here are some of the advantages of the Lettuce framework:

Here are some of the major shortcomings of the Lettuce framework:

Is Lettuce The Best Python Automation Framework For You?

Lettuce makes the entire process of Selenium test automation scalable, readable, and easy. The best part of using a BDD tool like Lettuce is that non-technical people can also participate in the test creation process as tests are derived from business requirements. Python developers and testers have greater inclination towards pytest-bdd as it has majority of the features supported by other BDD tools.

Nose2 is a Python unit testing framework and a successor of the Nose framework. It is based on the unittest hence; it is also referred to as an extension to unittest. Nose2 adds support to the PyUnit framework by providing plugins for test execution, enabling automatic discovery of test cases, and collecting documentation.

All these added functionalities make testing with PyUnit simple and easy. The plugin ecosystem of Nose2 adds support for decorators, fixtures, parameterized testing, modules, classes, and test discovery. Such in Nose2 is a DSL (Domain-Specific Language) for writing tests with expensive, nested features, also called as functional tests. More details of Such in Nose2 is available on the official website of Such.

Here are the details about the Nose2, python unit testing framework:

Nose2 only has a dependency on the unittest module which is shipped along with the Python library. Nose2 can be installed using Python Package Manager (pip).

Here are some of the advantages of the Nose2 python testing framework:

Here are some of the minor shortcomings of the Nose2 python testing framework:

Is Nose2 The Best Python Testing Framework For You?

If your team members are using the unittest framework and do not intend to switch to any other framework (e.g. Lettuce, Behave, PyTest, etc.), it is worth giving Nose2 a try as it is an extension of unittest.

As Nose2 also has support for parallelized testing, it can be used for automated browser testing kind of scenarios where test scenarios are executed on different browser & platform combinations. 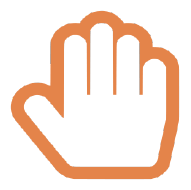 Testify is another popular Python testing framework in 2020 that is considered as a replacement of unittest and nose framework. As the framework is modeled after unittest, the tests written for unittest will require minimal adjustments to work with Testify.

Testify can be used for performing automated unit, integration, and system testing. The latest version of Testify is 0.11.0. It has an extensible plugin system that provides useful functionality around reporting. Like the Nose2 framework, Testify also provides enhanced test discovery and class-level SetUp & TearDown fixture methods that are executed once for the entire set of test methods.

Here are the details about the Testify framework:

The major advantage of the Testify framework is that it involves a gentle learning curve as it is based on the existing unittest framework. Installation is fairly simple as it only requires the Python Package Manager.

Here are some of the advantages of the Testify framework:

Here are some of the minor shortcomings of Testify framework:

Is Testify The Best Python Testing Framework For You?

Like Nose2, if your team is looking for a Python testing framework built on top of unittest, then it is worth trying out Testify. As achieving parallelized testing with Testify is a bit difficult, it might not be suited for scenarios such as automated browser testing.

In this article, we had a look at some of the popular Python testing frameworks that can be used with Selenium. Each of these frameworks have their own share of advantages and disadvantages. If you intend to include the non-technical members in the test creation process, you should try BDD tools such as Behave or Lettuce. To summarize, choosing the right Python testing framework purely depends on the project requirements and the competency available within the team.

Which particular Python testing framework do you use? Do share your experience in the comments section. Also, please feel free to share this article with your friends by retweeting us on twitter. Happy Testing☺ 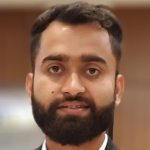 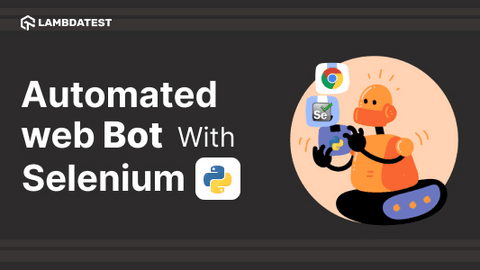 Getting Started With Selenium Python [Tutorial] 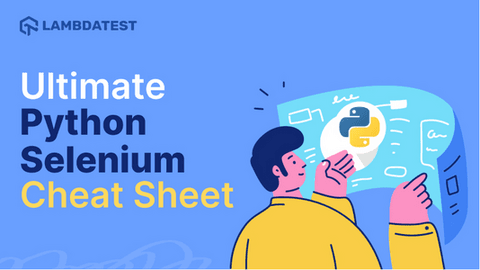 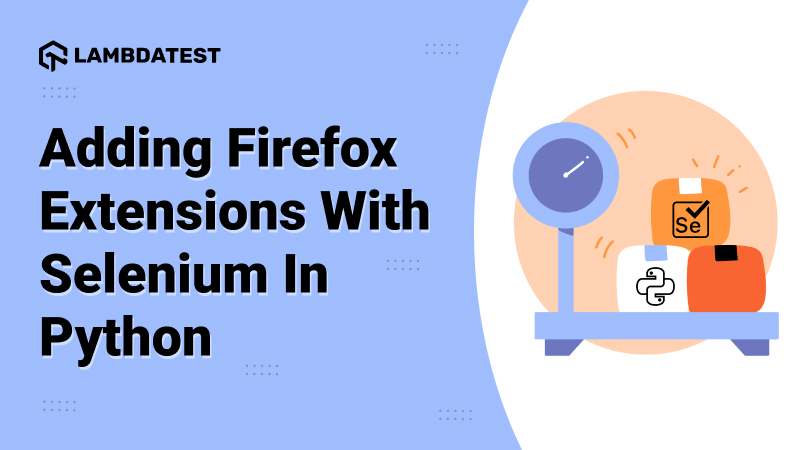 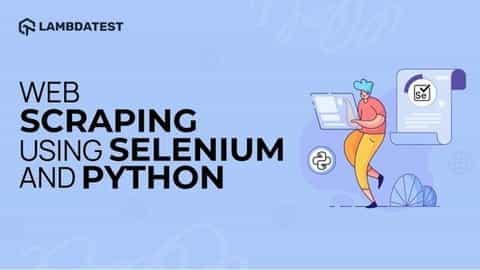 How To Perform Web Scraping Using Selenium And Python?