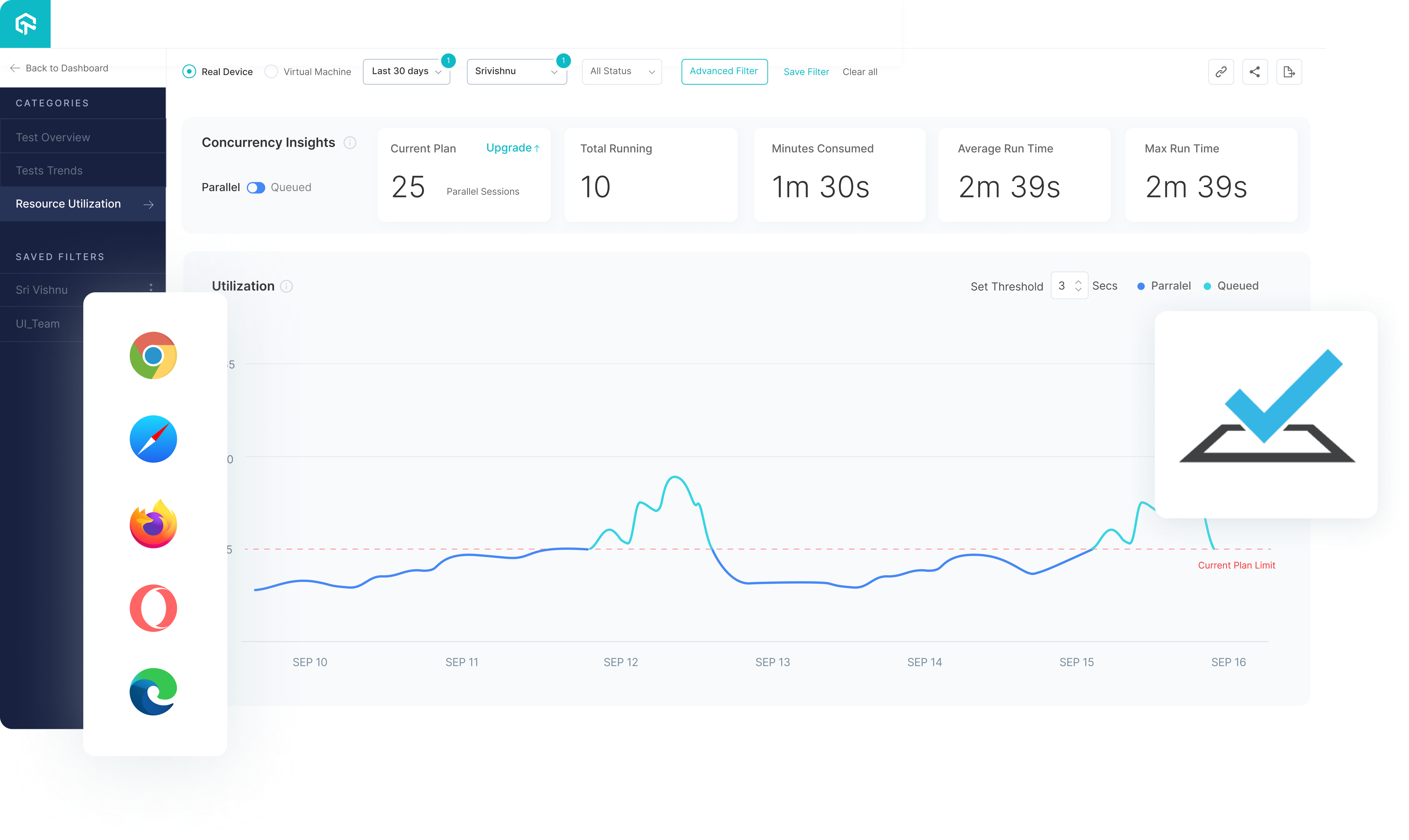 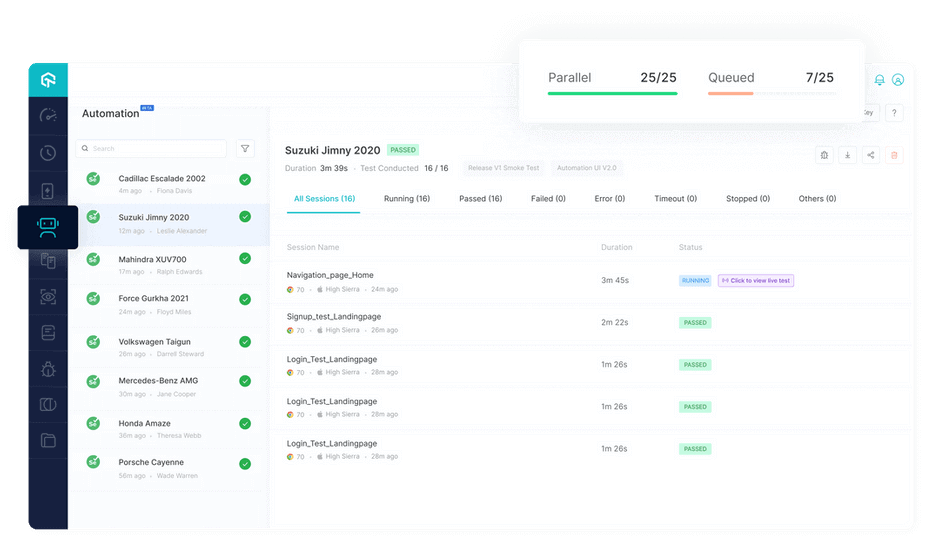 Scale your automation without buying and maintaining your own fleet of machines. LamdaTest enables you to run tests across 3000+ real browsers and operating systems.
Run your first test 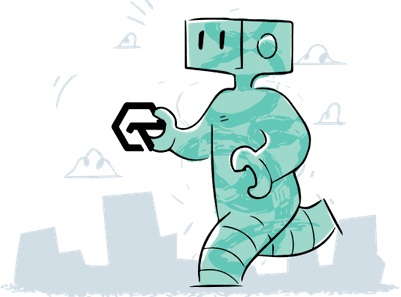 How LambdaTest is helping Global Enterprises

Run your Playwright tests online in parallel, over powerful hardware, in an environment that scales effortlessly. Tests on more than 50+ browsers and OS.

Run your Puppeteer tests on the most powerful cloud. Execute automation testing in parallel across 50+ browsers and OS combinations.

Blazing fast test execution on cloud that will beat your local test execution speeds. A LambdaTest exclusive platform that is guaranteed faster and scalable than any other cloud grid offering.

Selenium test infrastructure inside your firewall, running on your own cloud, but managed by us. Enterprise grade on premise test execution solution powered by LambdaTest. 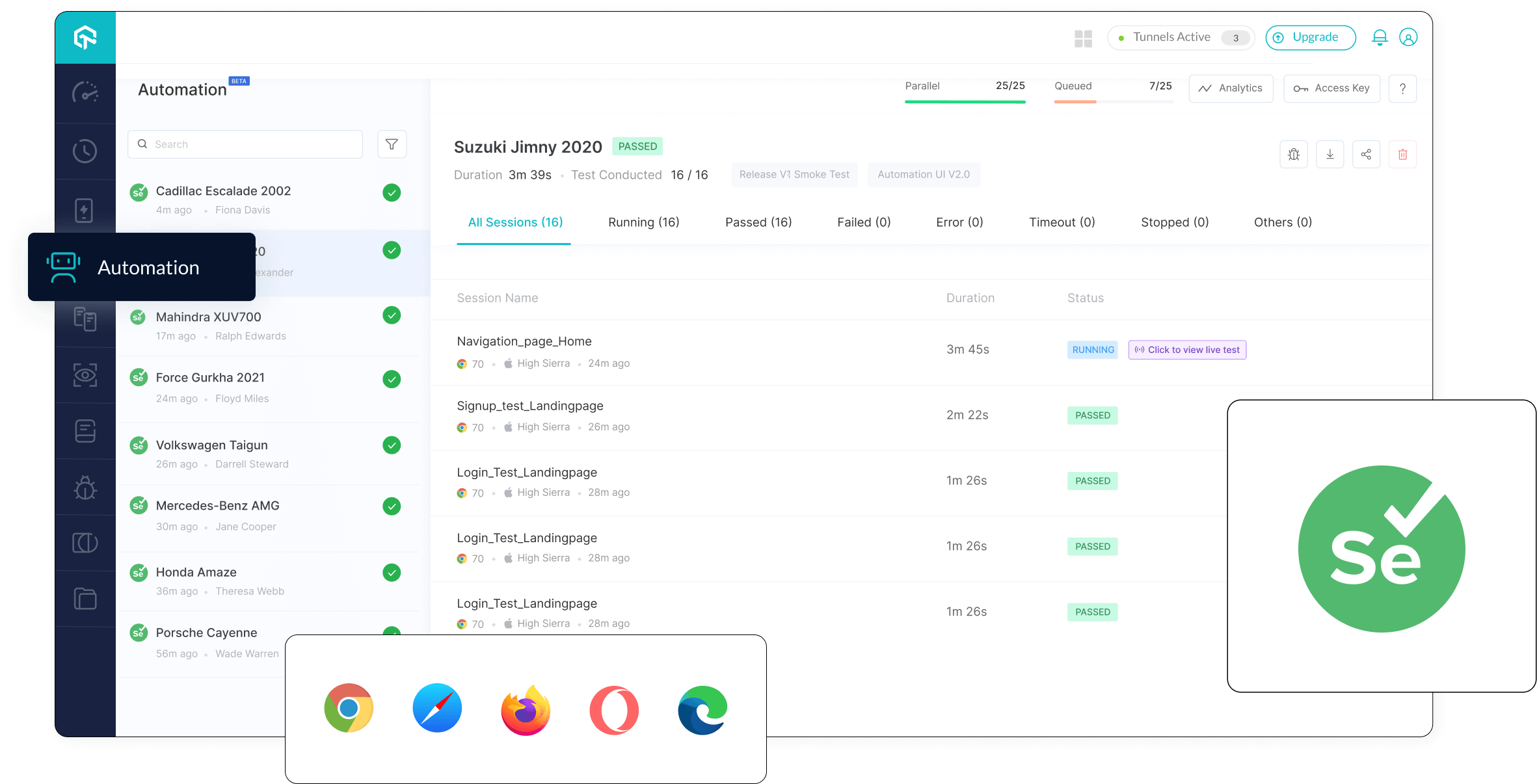 LambdaTest is #1 choice for SMBs and Enterprises across the globe.

Along with 3000+ browsers and devices combinations to test we provide you additional features to make sure you give your users a perfect experience.

Got questions? Throw them to our 24/7 in-app customer
chat support or email us on [email protected].

With a single click, push bugs in your choice of project management tools, directly from LambdaTest platform.

Signup to use LambdaTest, it's completely free to get started.

What is TestCafe?
TestCafe offers a comprehensive, and extensive platform to perform End-to-End tests for node.js applications. It supports both JavaScript and Typescript, so you can write tests in either one of the two. With TestCafe, you can create stable tests which are easy to integrate with your continuous integration process. You can also execute multiple test cases in parallel.
What are the benefits of Selenium in automation?
Selenium has numerous advantages for test automation. It also supports recording and playback for testing web apps and can execute numerous scripts across various browsers.
What is parallel testing?
Parallel testing is one of the best ways to cut down overall test execution time of the whole test build. If you have test builds of multiple tests, parallel testing at LambdaTest will allow you to run these Selenium webdiver tests across multiple machines simultaneously. so if you have a build of 100 tests, and are subscribed on 10 parallel testing plan, then you can run upto 10 test threads simultaneously across 10 machines. Running tests in parallel will cut down drastically your overall build test execution times.
How can I automate with TestCafe tests using LambdaTest?
The LambdaTest Automation Grid allows you to run end-to-end automation tests on a secure, robust, and scalable cloud-based infrastructure. You can perform automated browser testing with TestCafe across 3000+ browsers and operating systems using LambdaTest with a minor tweaks in your existing test scripts. All you need to define is a remote webdriver path, your LambdaTest username and access key in your code, along with the desired capabilities to trigger your TestCafe tests on the LambdaTest cloud.
Is TestCafe free?
Under the MIT License, users are free to use TestCafe. Community plugins provide custom reports, integrate other tools, launch tests from IDE, etc. It supports the most popular browsers. In addition, its plugins integrate other tools and convenience features (such as launching tests from IDE).
Is TestCafe easy to learn?
You can easily choose the elements you want to interact with when using TestCafe. In addition, testCafe tests are entirely on JavaScript, which communicates directly with the browser's Document Object Model (DOM). As a result, learning TestCafe's APIs is easier than learning Selenium's APIs.
HomeAutomation TestingTestCafe Testing