Built by Microsoft, Playwright is a Node.js library that, with a single API, automates Chromium, Firefox, and WebKit. These APIs can be used by developers writing JavaScript code to create new browser pages, navigate to URLs and then interact with elements on a page. In addition, since Microsoft Edge is built on the open-source Chromium web platform, Playwright can also automate Microsoft Edge.

Note: You can perform Playwright testing on LambdaTest cloud.

Playwright end-to-end testing has slowly gained popularity. Many developers consider it one of their favorite frameworks to work with.

The State of JS survey among developers shows that while Cypress adoption is on the rise, Playwrights adoption is still in the early stages of development. However, GitHub statistics show Playwright's popularity is growing (39.3k Stars and forks, 1.8k active users). 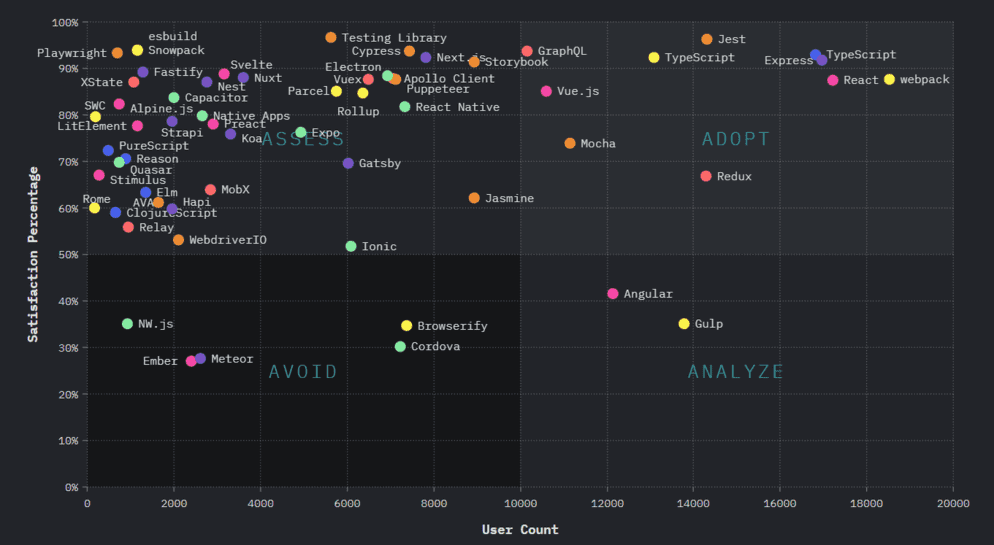 Playwright launches headless browsers by default. This allows you to run automated web tests without a UI, and you can also configure Playwright to run full (non-headless) Microsoft Edge as well.

The Rise of Playwright Framework

While Playwright is new to the market, it already has several features that make it a strong competitor. People who want to migrate from Selenium to Playwright can do so quickly since Playwright support C#, Java, and Python. Programmers aren't limited by the language they use; Playwright's first release was in January 2020, and it has gained popularity ever since.

Check out The State of JS 2021 Playwright testing data on the basis of developer Satisfaction, Interest, Usage and Awareness.

Since 2020, Playwright has shown a consistent level of satisfaction among developers and testers i.e., 93% as per both 2020 and 2021 survey.

The interest in using the Playwright testing tool by developers and QA testers has also shown consistency i.e., 70% as per both 2020 and 2021 survey.

As Playwright is comparatively new testing framework, it has shown a significant increase in its usage by developers and testers from 3% in 2020 to 10% in 2021 indicating positive growth in the coming years.

Playwright is a new web-automation testing tool quickly gaining popularity among the developers and testers community. It showcases a rise from 19% in 2020 to 34% in 2021, indicating a positive growth in the coming years.

Around 10.6% of developers have shown interest in using Playwright for their testing needs. The lack of awareness of the Playwright framework is at an all-time high i.e., 81.6%, but considering its still a new testing framework, it is already gaining popularity. Along with this, only 3.1% of developers would like to use Playwright again in the future.

The percentage of developers and testers interested in using Playwright has significantly increased from 10.6% to 17%. Furthermore, considering its a new testing framework, it has shown a drastic improvement in lack of awareness, i.e., in 2020, around 81.6% of devs and testers were unaware, bringing this percentage down to around 66.3% in 2021. Along with this, the percentage of users who would like to use Playwright again has also shown a significant increase from 3.1% in 2020 to 8.9% in 2021.

Playwright is an open-source framework developed by Microsoft and released in 2011. It is relatively new to the market but has gained popularity quickly. Microsoft continues to update and improve it based on user feedback, so if we look at the number of downloads for similar frameworks that have been on the market longer than Playwright, you can see how popular it has become. A cloud-based Playwright automation testing cloud-like LambdaTest solves the problems mentioned above.

Here are a few reasons that make Playwright a must-try framework:

The Playwright team and standard release notes also provide their release notes in the form of video walkthroughs. I haven't seen this from any of the other major frameworks, and it's a nice touch for gaining insight into how the product is developed.

You may be weighing the pros and cons of migrating from Selenium to Cypress, and also gaining popularity in the community.

Playwright testing stands out from its competitors because it outranks other JavaScript libraries because of its intuitive syntax and the flexibility with which it can interact with the browser across multiple pages and domains. Lastly, the execution speed of test scripts on Playwright tops other automation frameworks. The ChecklyHQ team created this benchmark report after performing in-depth execution speed monitoring of the major automation tools.

Playwright comes with native integration. For example, the Playwright has Docker images, allowing you to run tests in an isolated and controlled environment quickly. Native integrations are available for the top CI/CD tools, including GitHub Actions, Azure Pipelines, CircleCI, Jenkins, and GitLab. They also support your existing JavaScript test runners, like Jest/Jasmine, AVA and Mocha, which is useful if you are porting from an existing code base.

Lastly, Playwright has direct integration with Selenium grid online. This is essential for running larger suites of tests at scale and managing parallel execution through Selenium Grid.

Here are some unique features of the Playwright testing framework:

Here are some Playwright testing drawbacks:

To understand how Playwright's architecture works, we will compare its work with that of Selenium. Selenium sends each command as an independent HTTP request and receives JSON responses. Each interaction, such as opening a browser window, clicking an element, or entering text into an input box, then is sent as a separate HTTP request.

This means we have to wait longer for responses and increases the chances of errors. 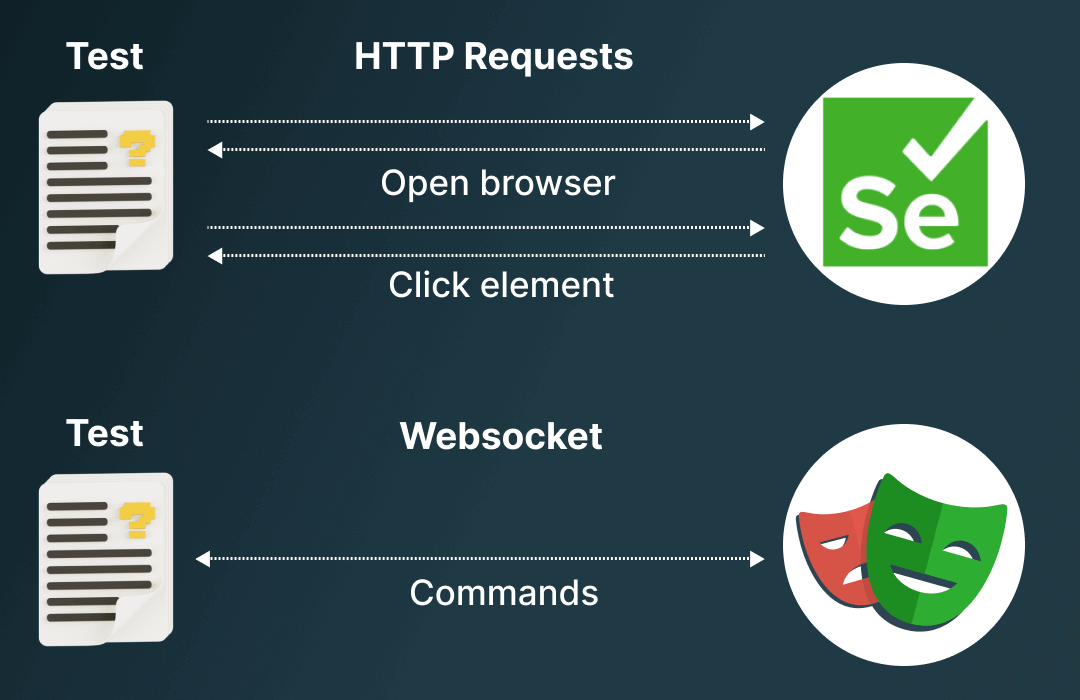 Learn how to set up Playwright test automation on the LambdaTest platform.

Browser automation is not a new technology. Selenium has been around since 2004 and has been used primarily to create test suites for websites. However, programmers have also used it to take screenshots and automate tasks when websites don’t provide APIs.

However, Selenium has a reputation for being unreliable. Tests powered by Selenium are commonly flaky and often fail intermittently for non-obvious reasons that are difficult to reproduce. Due to the resource-heavy nature of Selenium as it renders entire webpages, programmers started using headless browsers instead. These browsers perform the same functions as regular browsers but don’t actually display any content. PhantomJS was one of the more popular ones.

In 2017, the landscape of browser automation changed drastically. PhantomJS, a popular framework for headless testing, was deprecated. The reason for this move was Google’s announcement of headless Chrome, which was first available in Chrome 59. Firefox followed up with a headless mode later that year. These developments led to more efficient tests and scripts and hence Playwright was born.

Playwright vs Puppeteer: A Detailed Comparison

Microsoft's Playwright by Microsoft started as a fork of Puppeteer. For those who don’t know, Puppeteer is a node library that allows the automation of Chromium-based browsers with the help of JavaScript.

Microsoft's If you look it up, the top two contributors to Puppeteer now work on Playwright. The Puppeteer team essentially moved from Google to Microsoft and became the Playwright team. As a result, Playwright is very similar to Puppeteer in many ways. Both packages use the same API methods and bundle compatible browsers by default.

The biggest differentiating point of Playwright is its cross-browser compatibility. It can drive Chromium, WebKit (the browser engine for Safari), and Firefox. Along with this, starting a new library allowed Playwright to improve ergonomics in ways that would break Puppeteer. For example, Playwright’s page.click waits for an element to be visible by default. While Puppeteer can still improve, Playwright is more useful for some situations.

The last noteworthy difference is that Playwright automation platform offers more powerful browser context features, enabling you to simulate multiple devices with a single instance. Each browser context can have multiple pages underneath it, and each context is isolated from other contexts in terms of cookies and local storage.

In contrast, Puppeteer testing makes it easy to get started with browser automation. This is in part because of its ease of use, since it controls Chrome using the nonstandard DevTools protocol and lets you intercept network requests with ease and providing additional functionality over Selenium.

Playwright is available in a variety of languages, and each version has different dependencies. At package install time, Playwright will either download these dependencies for you or you can use Playwright CLI to install them.

Playwright constantly updates its support of browsers, so that the latest Playwright would support the latest browsers at any time. As a result, you need to run the install command each time you update Playwright.

How To Run Playwright Tests on LambdaTest?

To run your first Playwright automation testing script online, refer to our detailed support documentation & GitHub repository. No need to worry about the challenges with Playwright infrastructure. Want to know a fun fact? Your first 100 Playwright automation testing minutes are on us with just a free sign-up. You can also avail benefits of manual cross-browser testing, responsive testing, and more with a lifetime of free access to LambdaTest, the world's fastest-growing cloud Playwright Grid.

Our detailed documentation will help you develop a better functional understanding of the Playwright framework. Finally, kick-start your Playwright automation journey by running your first Playwright test script on the LambdaTest cloud.

Run your first Playwright test with our detailed blogs and video tutorials: