Cypress Tutorial: A Comprehensive Guide With Examples and Best Practices

Cypress is an open-source, full-featured, and easy-to-use end to end testing framework for web application testing. Cypress is a relatively new player in the automation testing space and has been gaining a lot of traction lately, as evident from the number of Forks (2.2K) and Stars (36.6K) for the project.

Unlike Selenium, Cypress is preferred by front-end developers and automation testers who are well-versed with JavaScript. However, Cypress is slowly catching up with Selenium, and the six-month download trend comparison of Cypress and Selenium indicates that the war between the two frameworks will continue to intensify in the coming months.

If you’re a developer looking to automate the testing of your application, this Cypress testing tutorial walks through the basics of Cypress, how to use it for end-to-end testing, and more.

Cypress is a renowned end-to-end testing framework that enables frontend developers and test automation engineers to perform Web and API testing. Since it is a JavaScript-based test automation framework, it is widely preferred by the developer community. Cypress is a testing tool that is targeted toward developers and QA engineers. It uses a unique DOM manipulation technique and operates directly in the browser. It supports various browser versions of Google Chrome, Mozilla Firefox, Microsoft Edge(Chromium-based) and Electron.

Note: You can run Cypress testing over the LambdaTest cloud.

The Rise of Cypress Framework

Cypress is a comparatively new testing platform that aims to overcome the challenges of automated frontend testing for applications built with React and AngularJS. It's a quick, easy and reliable tool for testing these applications by running them in their actual browser environments. Since Cypress executes tests on a real browser instance, you wouldn't need to download browser drivers, unlike Selenium.

Check out The State of JS 2021 Cypress testing data on the basis of developer Satisfaction,Interest, Usage and Awareness.

Interest: The interest shown by the developers for using Cypress testing framework has also shown a fall from 76% in 2019 to 72% in 2021.

For 2019: Around 28.5% of developers have shown interest in using Cypress for their testing needs. The lack of awareness of the Cypress framework is at an all-time high i.e., 36.9%. Along with this, only 23.9% of developers would like to use Cypress again in the future.

For 2020: The developer interest in using the Cypress testing framework has shown a slight increase as compared to the previous year and now represents 29.9%. There is a significant decrease in the lack of awareness for the Cypress testing framework and is now at 26.2% only. Along with this, the percentage of developers and testers who would like to use Cypress again has significantly increased from 23.9% to 32.9%.

2. Fast to Setup: Cypress has no additional requirements for a standard installation. You do not need any libraries, testing engines, servers, drivers or wrappers. Cypress doesn’t require configuration or additional choices to be made.

3. Fast to Implement and Debug: By providing a Domain Specific Language that is not pure JavaScript, Cypress makes it easier for JS developers in the automated testing community to start using the framework. It is also an approachable tool for experienced QA engineers who are already working with other testing frameworks.

The debugging process in Cypress is streamlined and simple. With native access to every single object, you can easily analyze errors within your application. You can debug your application directly with Chrome DevTools while the tests are being executed in the browser.

4. Fast to Execute: Cypress provides a fast, easy, and reliable way to test your application. It automatically waits for the DOM to be loaded so you don’t have to implement additional waits or set up explicit or implicit waits. Cypress follows everything that happens in your application synchronously—it knows when the page is being loaded and when elements send events.

Cypress tests run inside the browser, allowing Cypress to modify the browser's behaviour by listening to the incoming network requests and altering them on the fly. In addition, cypress tests have a lower flakiness rate than Selenium tests since Cypress does not use WebDriver. Instead, spies and stubs can be used at run time to control the behaviour of functions and times. Now, let's look at Cypress architecture. 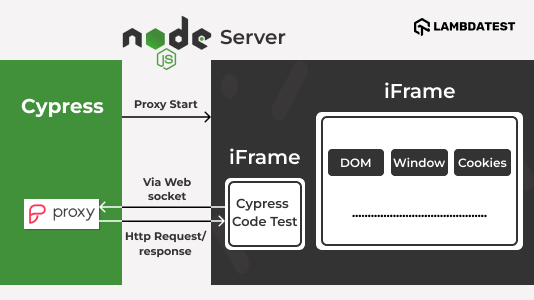 Cypress executes on a NodeJS server that invokes the tested browser (one of the iFrames on the page) for running Cypress tests, which are encapsulated in another iFrame. This can be accomplished by running both the Cypress and NodeJS processes on the same session, thereby allowing Cypress to mock JavaScript global objects. In addition, NodeJS's running process also acts as a proxy that helps intercept HTTP requests, helping Cypress mock these requests during testing.

As of the time of writing, Cypress supports Chrome-family browsers (including Electron and Chromium-based Microsoft Edge) and Firefox.

On the other hand, Cypress executes tests inside the browser, making it possible to test code in real time as it runs in the browser. Cypress runs on a server process, which makes it possible for Cypress to execute code in the same run loop as the application. Cypress, the test runner created by Facebook, is able to respond to application events in real-time because it constantly communicates with the server process. This also allows Cypress to interact with OS components for tasks outside of the browser, such as taking screenshots.

Here is the list of browsers supported by LambdaTest for running Cypress test scripts.

LambdaTest uses the latest minor version to run the tests when Cypress versions are set as 6, 7, 8 or 9. LambdaTest provides support for all the version, starting from - 6.0.0 to 9.2.0.

Write and execute your code at lightspeed with the help of LambdaTest Cypress examples code index.

Selenium vs Cypress: A Detailed Comparison

After working with Cypress UI testing, here are some of the best practices you should use to avoid anti-patterns in your Cypress automation tests:

1. Login Programmatically: To test most of the functionalities, a user needs to be logged in.

The way to deal with this would be to log in programmatically. To sign in programmatically, we need to use the Cypress request command cy.request(). This command makes HTTP requests outside of the browser and can bypass CORS restrictions and other security measures.

2. Using Best-suited Selectors: All tests we write should include selectors for elements. CSS classes may change or be removed, so we must use resilient selectors that can accommodate those changes.

The Selector Playground follows these best practices automatically. It prefers elements with data-cy data-test when determining a unique selector because it has the highest priority. We should use data-cy to keep consistency.

When you need to select an element with the text present in the page, you can use cy.contains(). However, you must ensure that the selected text always exists.

3. Assigning Commands Return Values: Cypress does not run synchronously, meaning that the return value of any command cannot be assigned to a variable.

Do not assign the return values of any Cypress command. Enqueueing commands makes them asynchronous, so there is no guarantee that the behavior of the tests will be the same if they depend on the return values.

If you’ve worked with JavaScript enough, then you’re probably familiar with JavaScript promises and how to work with them. You can access the value yielded by Cypress commands using the .then() command.

4. Having Tests Independent of Each Other:

5. Avoiding Small Tests With Single Assertion: Cypress is different from running unit tests, which only run a single event at a time, resetting the state between each one.

6. Using after or afterEach hooks:

It is a good idea to wait until after your test ends to write your state clean-up code. This will help you avoid introducing unnecessary failing tests and will speed up your testing performance.

Automated testing is an essential part of modern software delivery practices. The need for stable test automation tools has also increased with the increasing demand for quick time-to-market and stable products. Cypress has successfully established its place among other testing frameworks in web automation and end-to-end UI test automation.

Cypress addresses the pain points faced by developers and QA engineers when testing modern applications, such as synchronization issues and the inconsistency of tests due to elements that are not visible or available. As a result, Cypress, a JavaScript-based end-to-end testing framework, is the go-to choice for many frontend developers and test automation engineers for writing automated web tests.

Being an open-source framework, Cypress serves as a lifeline to many freelancer web developers & web testers. A cloud-based Cypress UI testing cloud-like LambdaTest solves the problems mentioned above.

LambdaTest is a leading test execution and orchestration platform that is fast, reliable, scalable, and secure. It allows users to run both manual testing and automated testing of web and mobile apps across 3000+ different browsers, operating systems, and real device combinations.

Using LambdaTest, businesses can ensure quicker developer feedback and hence achieve faster go to market. Over 500 enterprises and 1 Million + users across 130+ countries rely on LambdaTest for their testing needs.

How To Run Cypress Tests on LambdaTest?

Cypress cloud grids like LambdaTest allow you to perform Cypress testing at scale. LambdaTest allows you to perform automated cross browser testing on an online browser farm of 40+ browsers and operating systems to expedite the test execution in a scalable way. Moreover, it increases the test coverage with better product quality.

To run your first Cypress automation testing script online, refer to our detailed support documentation & GitHub repository. No need to worry about the challenges with Cypress infrastructure. Want to know a fun fact? Your first 100 Cypress automation testing minutes are on us with just a free sign-up. You can also avail benefits of manual cross-browser testing, responsive testing, and more with a lifetime of free access to LambdaTest, the world's fastest-growing cloud Cypress Grid.

Our detailed documentation will help you develop a better functional understanding of the Cypress framework. We also have Cypress Tutorials on our blog page. Finally, kick-start your Cypress UI automation journey by running your first Cypress test script on the LambdaTest cloud.

Run your first Cypress test with our detailed blogs and video tutorials:

What is Cypress testing?

Cypress is a JavaScript-based end-to-end testing tool for front-end developers and QA engineers. It operates directly in the browser, uses a DOM manipulation technique, and enables test automation while eliminating pain points.

Cypress executes tests directly in the browser. It runs on a server process that powers Cypress to run in the same run loop as your application, so you can be sure that your tests are not slowing down your app. Along with this, Cypress is fundamentally and architecturally different from Selenium, which means you can write faster, easier and more reliable tests.

What is Cypress used for?

Cypress is a great way to test functional applications in the browser. Cypress allows us to create our tests while our application is being developed and runs on all platforms. It gives a fast, easy-to-use debugging platform for all development activities.

How does Cypress work?

Cypress makes it easy to use the Dev Tools while tests run. You can see every console message, every network request, and even time travel back to the state your application was in when commands ran.

What kind of framework is Cypress?

What is Cypress automation?

The Cypress tool is a JavaScript testing automation solution used for web automation. It enables teams to create web test automation scripts, written in the de-facto web language that is JavaScript, for web tests.

Is Cypress a framework?

Yes, Cypress is an end-to-end test automation framework for web applications that enables frontend developers and test engineers to write automated web tests in JavaScript, the primary language used for developing websites. The use of JavaScript makes Cypress testing especially attractive to developers.