Devising A UI Test Plan That Works Like A Charm 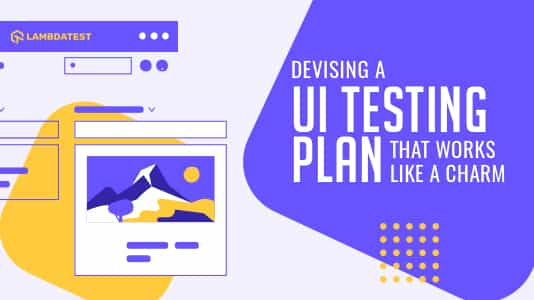 User Interface(UI) is the first thing that the user comes in contact with on your website. A good user interface attracts the user and helps to create a distinct identity of a website.This is why it becomes vital to test your UI, before pushing your website into production. UI Testing is a very important phase of development that opens up risks and possible breaks in the web application that could have been really hard to figure out.

In this article, I’ll take you through the different UI test development processes required to make your tests better and efficient. There are four major components in the testing- Test plan, Test Scenarios, Test Cases, and Test Scripts. I’ll also share how to make a good UI testing plan and how to create them for testing your web application. To know more about the UI testing and its components, you can refer to our previous blog on All About UI Testing.

How To Make A Good UI Test Plan?

A good UI test plan always starts with identifying different resources available for testing. The resources you’d need include the QA professionals with required skills, tools, and the documentation.

The first step in creating a good UI test plan is the documentation. After this, it is essential that your team prepares an SRS or formal document that describes different requirements and other essential elements of the web application.

After figuring out the resources available for UI testing, you need to prioritize different key areas that need to be tested. You need to identify the resources you’d require for the testing method(s) you’ll follow and their respective documents.
Also, every good testing plan should include responsive testing and cross browser testing in order to give the best UI/UX experience to the user. You need to make sure that your website is completely responsive and doesn’t break in any screen size, device, or browsers your users might be using.

Why Go For A UI Test Plan?

It is important that you have a test plan before you start with UI testing. A good UI test plan can help you to create a structural map of your overall process, manage your time better and a guide to refer to make sure everyone is on track. Even though there are some distinct advantages, you might wonder if you really need a test plan? Or, if it’s just another activity you spend time on but doesn’t give any results?

I’ll answer these questions by highlighting the importance of UI test plans.

How To Write A UI Test Plan?

Since you know that a test plan contains just the descriptions, it is important to know what should be included inside a UI test plan. So, some of the key points that should be remembered while creating a test plan may include:

Once you are done with documenting the above-written points, you can use smoke testing or sanity testing for creating a UI test plan.

Once we are done with documenting the UI test plan, we can move forward with the creation of test scenarios for our project

A test scenario is a high-level idea of what needs to be tested. For example, we can say that “A user can log in on the website” as a test scenario. This will contain a set of test cases under it which will result as a positive or negative outcome of the scenario and are focussed just on the login functionality. Since a test scenario tells a functionality that will be used by the customer on the website and so it is very important that the tester thinks with respect to the end-user and create test scenarios accordingly.

Why Go For Test Scenarios For UI Testing?

How To Write A Test Scenario For UI Testing?

So by now, we are done with the creation of a UI test plan and test scenarios for our project. The next step is to write test cases that are covered under the test scenarios.

Why Go For Test Cases?

Test cases are an integral part of the overall UI testing process. The importance to write a test case is:

How To Write Good Test Cases?

If the test cases are written in a proper way, they provide greater test coverage and efficient testing. So, it should be a thought-out process. Here are some tips to write better test cases. 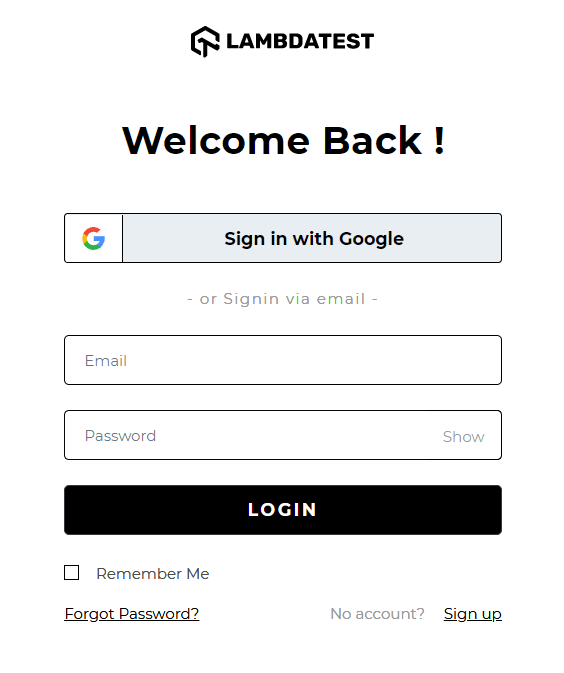 For the above login page of LambdaTest, the following test cases can be written:

Remember that these test cases come under the overall umbrella of the test scenario “Login Into LambdaTest”.

Test scripts are detailed line by line descriptions of the tests performed on the web application. These descriptions are specific but detailed in terms of the data, test cases and the functionality of the web application. The results of the test cases and their expected outcomes are also logged into the test scripts. Do we really need them? Definitely we do.

Why Go For Test Scripts?

Test scripts provided a detailed explanation of the test cases for responsive testing of UI. They are important to be written in the testing phase because:

How To Write Test Scripts?

It is very easy to write the test scripts since it just provides detail about the test cases. You just need to remember the key points that should be included in the test scripts:

To demonstrate, let’s see how a test script looks like:

Also Read: All You Need To Know About UI Testing

UI Test plan, test scenarios, test cases, and test scripts make a complete test environment for a tester. These four elements of testing are so closely knit together that it is easy to get confused or mix one into another. While it is important to document all of these elements, sometimes, you might find one of them not included in the overall testing phases. It totally depends on the testing methodology your project is following.

This blog was aimed at separating the boundaries between these elements and clearing the concept. So the next time you are hired as a tester and are presented with these documents in front of you, you have no questions and start your job right away. That’s all for now! Do share and retweet this article. Happy Testing!!!?

I am a computer science engineer. I love to keep growing as the technological world grows. I feel there is no powerful tool than a computer to change the world in any way.