Puppeteer is a tool that automates and streamlines front-end development and testing. It was developed by Google and is maintained as an open-source project.

Built by Google, Puppeteer is a Node library for controlling headless Chrome over the DevTools Protocol. It also offers high-level APIs for performing automated tests, developing and debugging website features, inspecting elements on a page, and profiling performance.

What is a Headless Browser?

A headless browser is a regular browser, except that we cannot see anything on the screen. The program runs in the backend i.e., it's not visible, but it still has functionality. Thus, it's sometimes known as a "headless" or "headless browser."

A headless browser can perform all the functions of clicking links, uploading and downloading documents, and navigating pages by executing our program's instructions. When we use a normal browser, we see each step of the program in a GUI presentation. But when we use a headless browser, all steps of the program are carried out sequentially and correctly, and we can track it with the help of a console or command-line interface.

The Rise of Puppeteer Framework

Since its inception, The Puppeteer project has been widely adopted by developers as a simpler way to introduce automation into their development workflow. Many developers have authored extensive tutorials, and their feedback has been invaluable in improving Puppeteer's capabilities.

Puppeteer, which was initially released in January 2018, has quickly gained popularity as one of the leading open-source automation frameworks.

Check out The State of JS 2021 Puppeteer testing data on the basis of developer Satisfaction, Interest, Usage and Awareness.

The interest in using the Puppeteer testing tool by developers and QA testers has also shown a consistent decline i.e., 69% in 2019 to 58% in 2021.

Irrespective of the decline in the interest of using Puppeteer as the go-to testing framework, it shows a significant rise in its usage by developers and testers i.e., 27% in 2019 to 37% in 2021.

Puppeteer has shown a significant increase in its awareness among the developer and tester community. It risen from 67% in 2019 to 78% in 2021.

Around 27.3% of developers have shown interest in using Puppeteer for their testing needs. The lack of awareness of the Puppeteer framework is at an all-time high i.e., 33%, but considering its still a new testing framework, it is already gaining popularity. Along with this, only 24.4% of developers would like to use Puppeteer again in the future.

Puppeteer is a Node library that provides complete automation for Chrome. One of Puppeteer's main advantages is its ability to access and control DevTools Protocol and you can easily install it using npm or Yarn.

Puppeteer is a tool for automating the process of frontend development and testing. It is a tool that automates browsers. It can be used for automating most UI tests, including keyboard and mouse movements, as well as web page crawling and scraping. It works with applications written in Angular and AngularJS.

Unlike Selenium, Cypress Protractor, and many other testing frameworks, Puppeteer is not considered a browser automation tool. Rather, it is used to manage the internal features of the Chromium browser. Puppeteer acts as a development tool that lets you run a headless browser in Node.js to perform a majority of tasks performed by a developer, such as handling requests and responses, locating elements, network traffic, performance and so on.

Puppeteer gives you the power to automate things you do manually in the browser. Here are some of those features:

As the automation context changes daily, Puppeteer might not remain the go-to automation tool for long. One of the major drawbacks is that Puppeteer supports only the Chrome browser as of now.

By following the protocols of DevTools, Puppeteer manages Chromium or Chrome browsers with the help of top-quality API provided by the Node library. Puppeteer testing follows the below process: 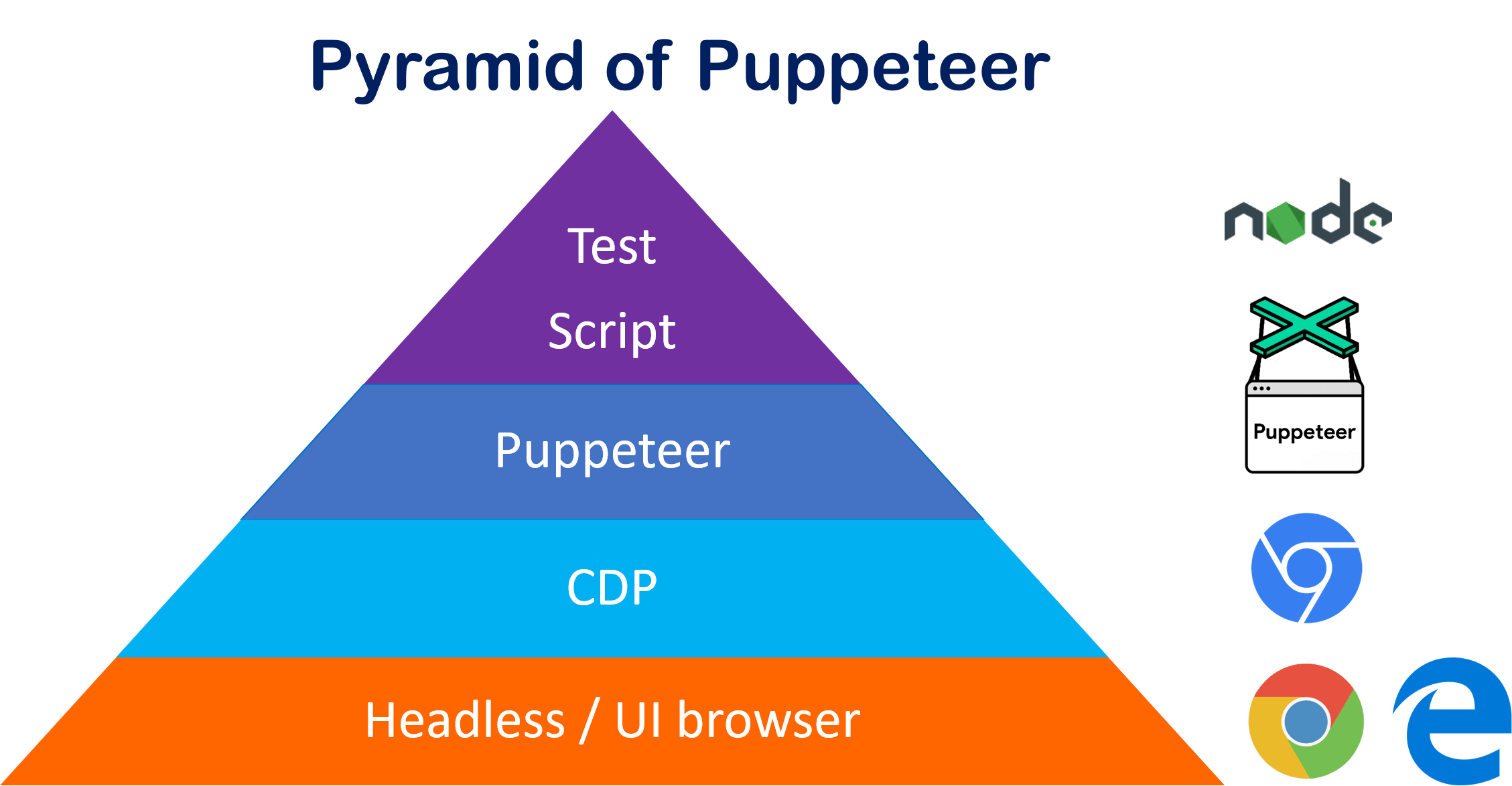 Before Puppeteer, the only way to test user flows within web applications was through an automated headful browser (Firefox with Selenium) or a Headless browser that was built on top of its own unique JavaScript engine. A headless browser, which presents no user interface, is different from a headful browser, the kind we use to interact with the internet.

To remove the trade-offs between speed and reliability, Puppeteer leverages the Chromium browser environment for running tests, giving developers the flexibility to use headless or headful browsers that run on the same underlying platform as their users.

Puppeteer was built to be easily integrated into any developer's workflow. This led to an increase in popularity amongst developers, who were then incentivized to build support for Puppeteer into popular testing frameworks such as Mocha. Playwright vs Puppeteer vs Cypress vs Selenium: A Detailed Comparison 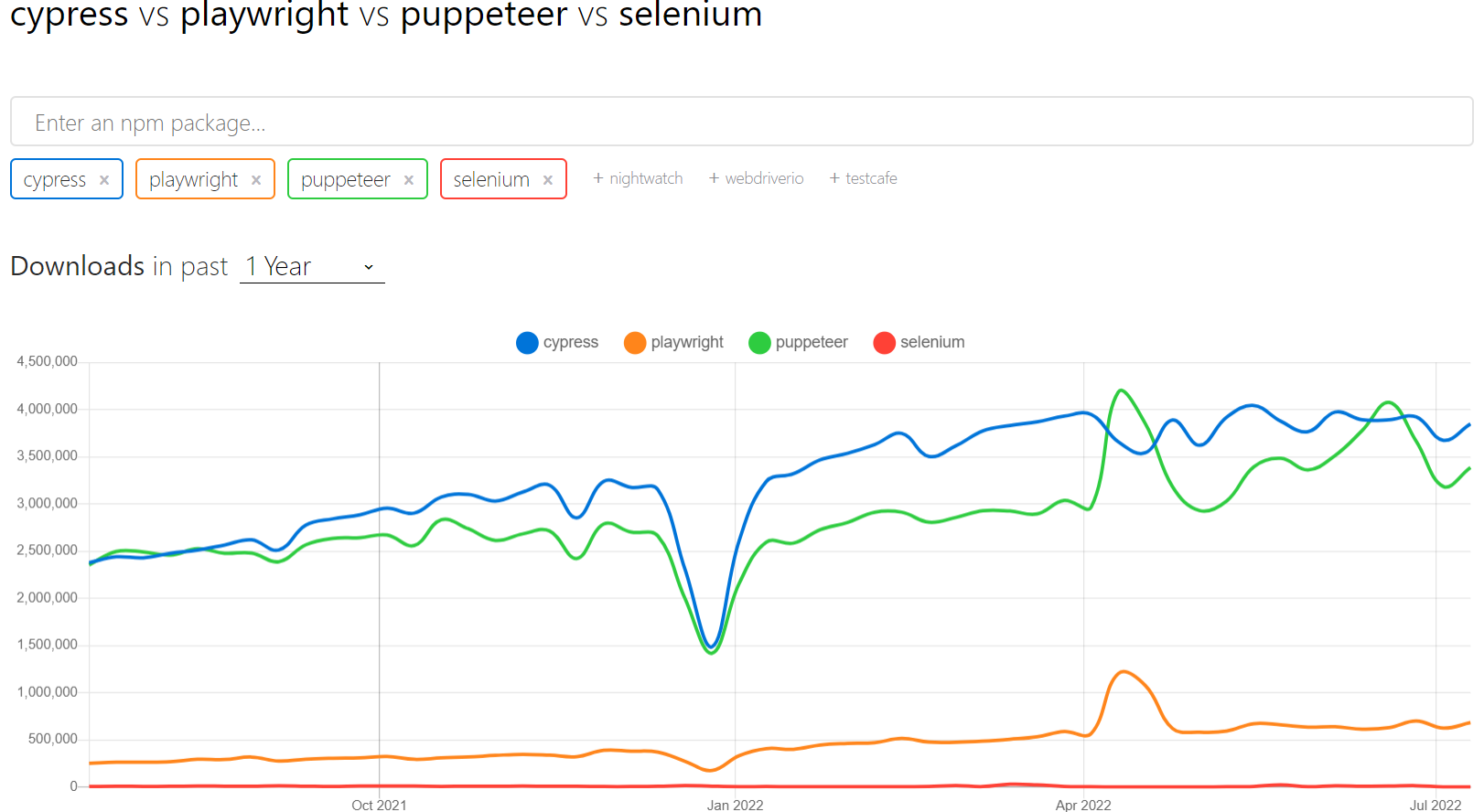 As per the last 1 year data of NPM Trends, Puppeteer has shown a significant rise in its downloads and now has come alongside famous automation testing frameworks like Cypress. Currently Puppeteer sits at 3.3 million downloads.

Along with this, the GitHub Stats show that Puppeteer has the highest number of stars i.e., 79,074, among all the top frameworks. This also proves a positive growth for Puppeteer among the developer and tester community.

Puppeteer 3.0, a Node.js library that provides a high-level API to control headless Chrome or Chromium over the DevTools Protocol, now supports Firefox in addition to Chrome. The new version also updated support to the latest Chrome 81 and removed support for Node 8.

How To Run Puppeteer Tests on LambdaTest?

To run your first Puppeteer automation testing script online, refer to our GitHub repository. No need to worry about the challenges with Puppeteer infrastructure. Want to know a fun fact? Your first 100 Puppeteer automation testing minutes are on us with just a free sign-up. You can also avail benefits of manual cross-browser testing, responsive testing, and more with a lifetime of free access to LambdaTest, the world's fastest-growing cloud Puppeteer Grid.

Our Puppeteer tutorials will help you develop a better functional understanding of the Puppeteer framework. Finally, kick-start your Puppeteer automation journey by running your first Puppeteer test script on the LambdaTest cloud.

What is Puppeteer Testing?
Puppeteer is a framework for headless Chrome testing, allowing users to control the browser using commands written in JavaScript.
What is Puppeteer test?
Puppeteer framework is a tool that allows developers to automate the testing of websites in Google Chrome. It allows testers to use JavaScript commands to interact with the browser.
What is Puppeteer npm?
Puppeteer is an open-source Node library for controlling Chrome or Chromium over the DevTools Protocol. It is headless by default, but can be configured to run full (non-headless) Chrome or Chromium.
What is Puppeteer and Selenium?
Puppeteer is a Node.js package that allows developers to control headless Chrome through the DevTools Protocol. Whereas, Selenium offers a full suite of tools that support the testing of various browsers, operating systems, and languages.
What are the benefits of Puppeteer Testing on LambdaTest?
LambdaTest is the most fastest platform to help you execute Puppeteer tests at scale faster with its robust, reliable & secure cloud grid. You can trigger Puppeteer tests instantly on 50+ browser versions (more to come) and moreover get features that aid you to execute tests and deploy faster.
What browser and OS versions does Puppeteer on Automate support?
LambdaTest makes testing across browsers a breeze. Run Puppeteer tests in parallel (across 50+ browsers and OS configurations) to further cut down on test execution time. Not only this, reduce feedback times and get your product out faster with LambdaTest.
How many Puppeteer tests can I run parallely?
LambdaTest allows its users to run as many parallel tests you want at scale. However the freemium version allows users to run 5 parallel tests for the duration of their trial. If you have any questions about this please contact us at: [email protected]
Is Selenium better than Puppeteer?
It depends on your project. Puppeteer is a browser automation API with high-level controls over Chrome and Chromium. This makes it faster and more reliable than other test tools, like Selenium. Selenium is a web-UI testing library used for testing web applications by automating browser interactions. Selenium offers you a wider test coverage as it supports every major browser, also Selenium is compatible across major programming languages and is not just restricted to JavaScript, like Puppeteer.
HomePuppeteer