Howdy techies and LambdaTest customers! In our continuous endeavor to empower the QA community, we are elated to bring Cypress framework support on LambdaTest automation testing cloud!!

You read it right! You can now accelerate automation testing by leveraging the enormous capabilities offered by Cypress CLI on LambdaTest!

NOTE: If you want to see Cypress in action, feel free to ping us over our chat support or our support mail, or directly schedule a demo with us.

For the uninitiated ones, Cypress is a wonderful testing framework designed for modern web development and testing. Released in late 2017, as a much faster alternative to the Selenium Automation testing tool, Cypress makes end-to-end automation tests easy and fun. It is one of the few frameworks that discarded traditional WebDriver-based web automation and operates directly on the browsers leveraging browser APIs. This combined with its capability to run on headless browsers makes running Cypress tests super fast.

Watch this video to learn how to run Cypress tests in headless mode differently.

After last year’s release, Cypress currently supports Chromium family browsers like Chrome, Electron, and now Edge, as well as Firefox. In other words, Cypress now has cross browser support. You may guess where we are going with this.

LambdaTest now has native support for running Cypress based cross browser tests. And not only that, you can run these tests at a scale by running them parallelly across multiple browser environments and thereby reducing your testing times.

Curious to know how Cypress CLI on LambdaTest adds scalability and reliability to your Cypress tests? Let’s find out more!

As a Cypress user, you may ask why choose LambdaTest when the built-in Cypress dashboard is so powerful? Imagine burning dollars on setting up an in-house Grid infrastructure that would require recursive pumping of dollars for scaling up and maintenance. There is no light at the end of the tunnel with local Grid infrastructure.

Scalability, reliability, and security are the three major things that you can achieve with Cypress CI on LambdaTest. LambdaTest not only allows you to perform Cypress testing on the cloud-based Grid but lets you perform cross browser testing at an unimaginable scale. LambdaTest supports the below listed browsers, browser versions, and Operating Systems for Cypress testing.

Note: The Operating systems, with (*) mentioned against them, will be live soon. There is no support for Chrome 82 and Edge 82 since these browser versions were not released by Google and Microsoft respectively due to release delays.

Diving Inside The Automation Console

Once you have set up LambdaTest Cypress CLI in your system, you can run your first ever automation script. Here is a snapshot of how you can run 10 tests in parallel using Cypress on LambdaTest:

As soon as your test script starts executing, you will be able to check the status on the LambdaTest Automation Dashboard. 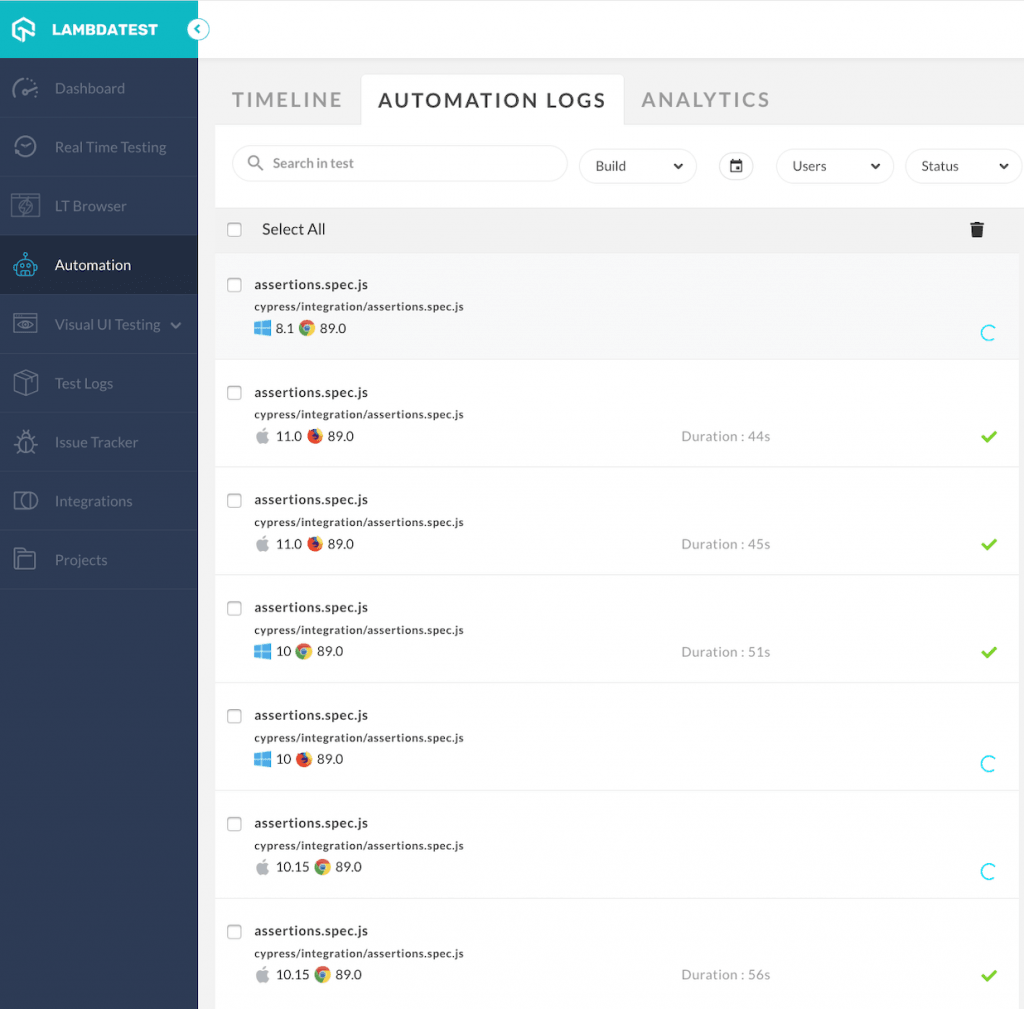 All your builds are neatly displayed in the Timeline section. You would also be able to check the timestamps for your script execution, along with the time taken for execution completion.

From the Automation Logs, you will be able to:

You can also analyze each of these tests from the Analytics section. 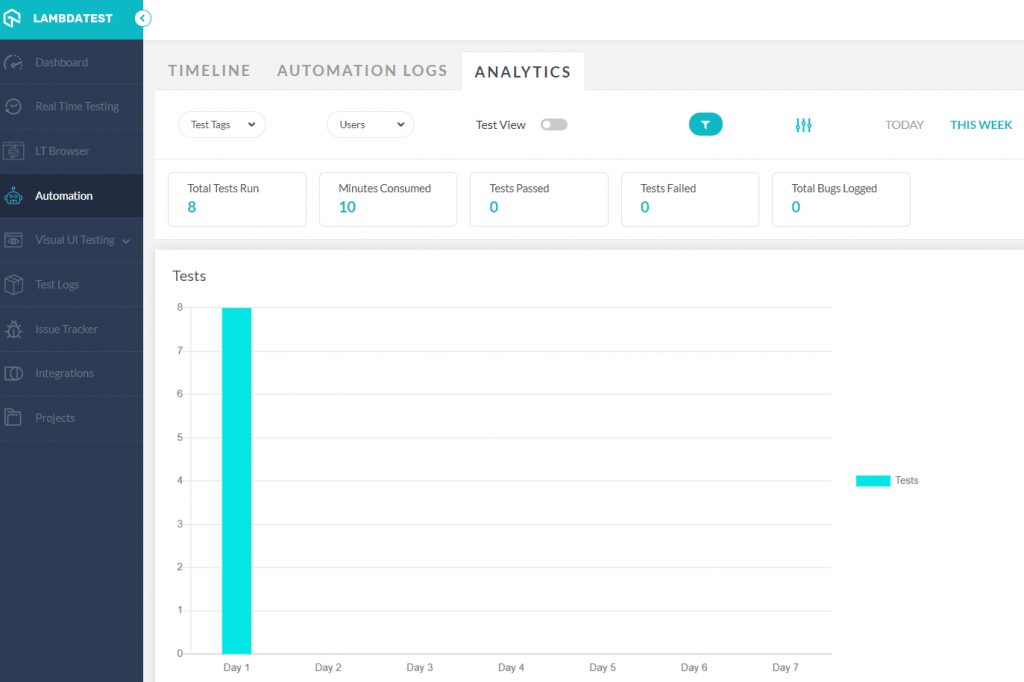 Complying with cross browser compatibility is of utmost importance and it can be a tedious and expensive task when done using the local Grid infrastructure. Using LambdaTest, you can automate testing using a secure, scalable, and reliable Cloud Grid. You can also use Cypress CLI on LambdaTest to run Cypress tests locally.

That’s not all, you can integrate your Cypress automation test with popular CI/CD tools like Jenkins, Circle CI, GitLab CI, and more. Check out LambdaTest integrations page to know more about how you can weave the magic around automation testing with Cypress, CI/CD, and LambdaTest.

Get Started with Cypress Today

With this integration, LambdaTest has given you seamless access to real-time reloads, consistent results, zero flakiness, better control, maximum parallelization, and much more. All the more reason to count on LambdaTest for executing, scaling up, and making the most of your tests in parallel across different browser versions!

If you want to see Cypress in action, feel free to ping us over our chat support or our support mail, or directly schedule a demo with us. If you are already a Cypress user, we can help you get onboarded and help you set up your current Cypress tests over LambdaTest Automation Cloud. You just have to let us know and we would be happy to help!!!!

Try out Cypress CLI on LambdaTest today. Do subscribe to our newsletter to stay updated with more exciting news!

That’s not all for the big news for today. We’ve raised $16M in a Series B round led by Sequoia Capital, along with Telstra Ventures, Wamda Capital and leading sovereign wealth fund. This new infusion of funds will help us fast track our vision of empowering developers and testers worldwide with a powerful, comprehensive and secure continuous quality test platform. With the launch of Cypress CLI on LambdaTest, we have already taken the first step in this direction. There’s so much more to come, stay tuned! 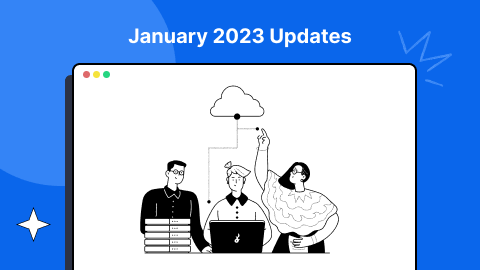 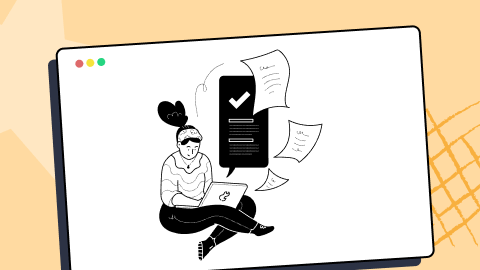 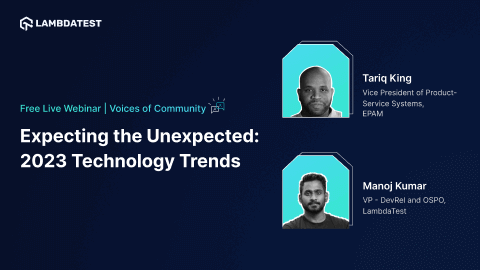 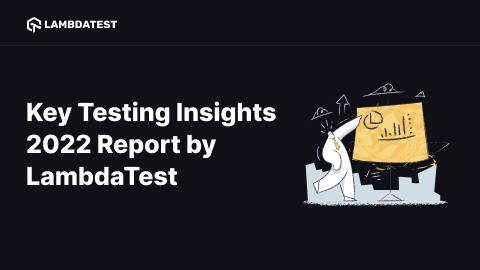 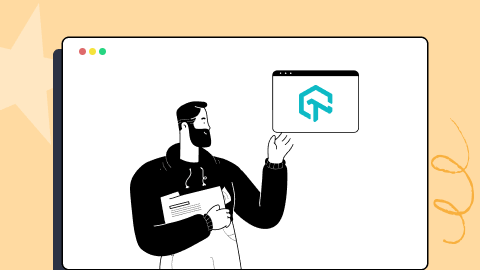 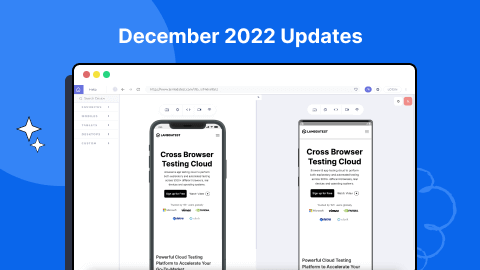