Each component of the software or application will be tested individually in accordance with a test strategy and test plan. For each of these components, a test scenario is defined, which is further subdivided into high-level test cases to low-level detailed test cases.

What is Component testing?

In Component testing, programmers use a test structure or debugging tools to test the code they have written with the support of integrated development environments(IDEs). Component testing detects defects immediately and fixes them without maintaining records.

Testing the entire system is challenging due to the magnitude of the software applications. There may be several test coverage gaps as well. Therefore, it is recommended to do Component testing first and then integrate or perform functional testing later.

Since now we have covered the fundamentals of Component testing, let's dive into the facts about why you should opt for it.

Verifying the test object's input/output behavior is the primary goal of Component testing. It ensures that the functionality of the test object precisely corresponds with the given specification.

The component tester will often do a second test to determine whether the module functions effectively inside the context of other application components.

Software component tests evaluate the correctness of a specific unit of source code produced during the software coding process. The following are typical defects found in it:

What do you verify in Component testing?

Component testing may include checking for functional or non-functional features of system components. It can consist of resource behavior testing (e.g., finding memory leaks), performance testing, structural testing, and so on.

It examines all of the modules' core functionality. There are entry and exit requirements as mentioned below:

When is Component testing done?

After unit testing, Component testing is carried out. As components are tested as soon as they are generated, there is a possibility that the results obtained from a component under test are dependent on other components that are not yet created.

Depending on the development lifecycle model, you can perform Component testing in isolation from other system components. The isolation is used to keep external influences away. So, to test that component, you need to simulate the interaction between the software application's components using stubs and drivers.

You can do Component testing using two different methods.

Every software comprises several parts, each of which has further subdivisions. In a nutshell, Component testing in small is the process of assessing each element independently of the others. 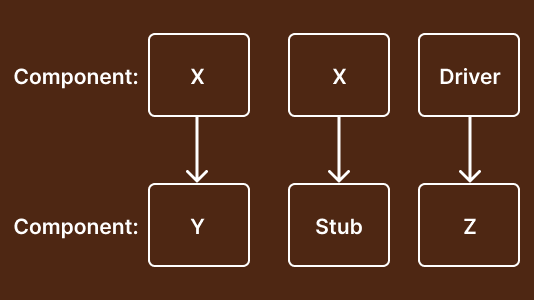 The flowchart below will help you understand the different phases of Component testing. 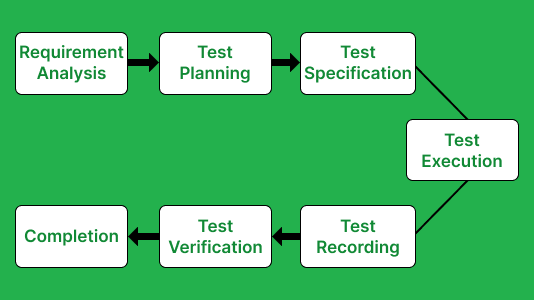 How to create Component test cases?

You can create Component test cases from work products, such as software designs or data models. Each tested component uses a series of test cases, each examining a particular input/output pair or partial capability.

Let's look at two web pages: login and homepage. Both pages have a connection in terms of functionality.

Below are the website component test cases of both pages (login and home page).

How can Component test drivers and stubs be built methodically?

According to the component engineering paradigm, components can have the ability to be customized by engineers to meet specific needs.

Building component frameworks requires the use of component test stubs. Each test stub replicates a component's black-box behavior or function. Generating test stubs may be done using one of two methods.

How does Component testing fit with other QA methods?

Component testing is vital in software testing. Let's break this down using the following aspects:

The testing team performs component or module testing. Removing all potential defects saves money and time in the long run. The following are some significant differences between component testing and unit testing:

As a result, Component testing is essential for identifying flaws and defects. We recommend that you undertake Component testing before going on to unit testing to ensure that each component of the application functions properly.

How Component testing differs from Interface, Integration, and System testing?

After integrating and testing each component, you can perform system testing to evaluate the entire software application or system.

The most accurate and effective technique to gauge how well a module or software component will perform at any level of development is through Component testing.

As technology evolves, you will see a sudden shift in how organizations operate. Traditionally, a dedicated team of testers would create manual test cases and scenarios and record their testing observations in Excel sheets. Therefore, you must spend a lot of time configuring your testing and infrastructure requirements.

This is where cloud testing platforms like LambdaTest solve your testing needs. It allows you to test your websites and web applications on an online browser farm of over 3000+ desktop and mobile browsers online.

The following are some of the features of LambdaTest’s platform:

Let’s see how to perform real-time Component testing on the LambdaTest platform.

It will route you to a cloud-based virtual machine running a real operating system. Here you can perform real-time Component testing of your websites or web applications.

Look at the video tutorial below to learn how to perform real-time testing on the LambdaTest platform.

Component testing validates that each software package operates according to requirements and guidelines. You can find the main issues that make Component testing complex or challenging in the list stated below.

The divergent perspectives of a software component's stakeholders, the supplier, and the user are what distinguishes component-based testing from traditional testing most fundamentally. It reveals the critical distinction between component-based advances and conventional software systems in validation.

Unlike component-based development, which integrates components according to several user profiles depending on their integrating contexts, traditional system development combines all parts exclusively following a single user profile. By getting rid of any preventable bugs, it saves money and unneeded work in later stages.

Component testing guarantees that each piece of software operates according to expectations and specifications. It is imperative in software engineering to identify issues. It would be better if you prefer to perform Component testing before beginning integration testing to ensure that each application part functions properly.

What is the difference between component and unit testing?

What is the purpose of Component testing?

Component testing aims to validate the system's input and output behavior, whether each component is usable, and the application's user-friendliness.