Espresso is a native open-source framework to automate UI testing of Android applications.

Developed by Google, Espresso is an Android automation testing framework and has gained popularity due to its high performance. Using Espresso, you can create very simple and straightforward tests without worrying about the application's infrastructure. It is also open-source so that developers can customize it. According to research from the University of Oulu, Espresso is extremely fast and has the shortest test execution time and fallibility.

You can perform Espresso testing in both Java and Kotlin languages. Espresso also synchronizes your test actions with application UI. It lets you test native and hybrid views of Android applications. Furthermore, Espresso enables you to conduct black-box and component testing of applications and provides testing annotations and assertions. It also comes integrated with Google’s Android Studio.

Why is Espresso testing important?

If you are working on an Android project, validating your projects across various cycles like build, development, and testing can be cumbersome. Below are the pointers that demand the need for Android testing of the application user interface -

When it comes to Android testing, Espresso provides loads of features to help test automation engineers and developers fasten their Android app testing process. Besides Synchronization capabilities and Android Intents, below are the following additional features of the Espresso framework.

By using Espresso for Android automation testing, you can reap numerous benefits. Some of them are as follows -

In the next section of this Espresso tutorial, we will look at how Espresso works on Android.

How does Espresso work?

It is crucial to understand the test scenario before automating your apps with Espresso. Testers should think about what a user can do while interacting with Android applications, i.e., finding UI elements and interacting with them.

Espresso doesn’t allow direct access to activities and views of the applications as it can result in test flakiness. This is why you won’t see the methods like getView() and getCurrentActivity(). To access views securely, you can create your subclasses of ViewAction and ViewAssertion. 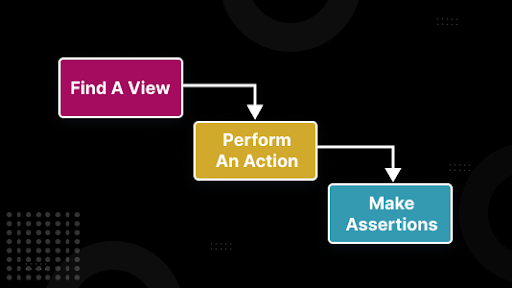 There are four types of Espresso’s API.

How to create UI tests for Espresso?

This section of Espresso tutorial talks about writing UI test cases in Java and Kotlin based on the above discussed Espresso’s API Components.

Espresso vs Appium: Which one to choose?

In this section of Espresso tutorial, we will look at how Espresso differs from Appium.

Let’s check out the key difference between Espresso and Appium.

Despite numerous benefits, there are some disadvantages of the Espresso framework.

If you want to kick start your app test automation using Espresso, check out this handy Espresso testing Cheat Sheet for Android. 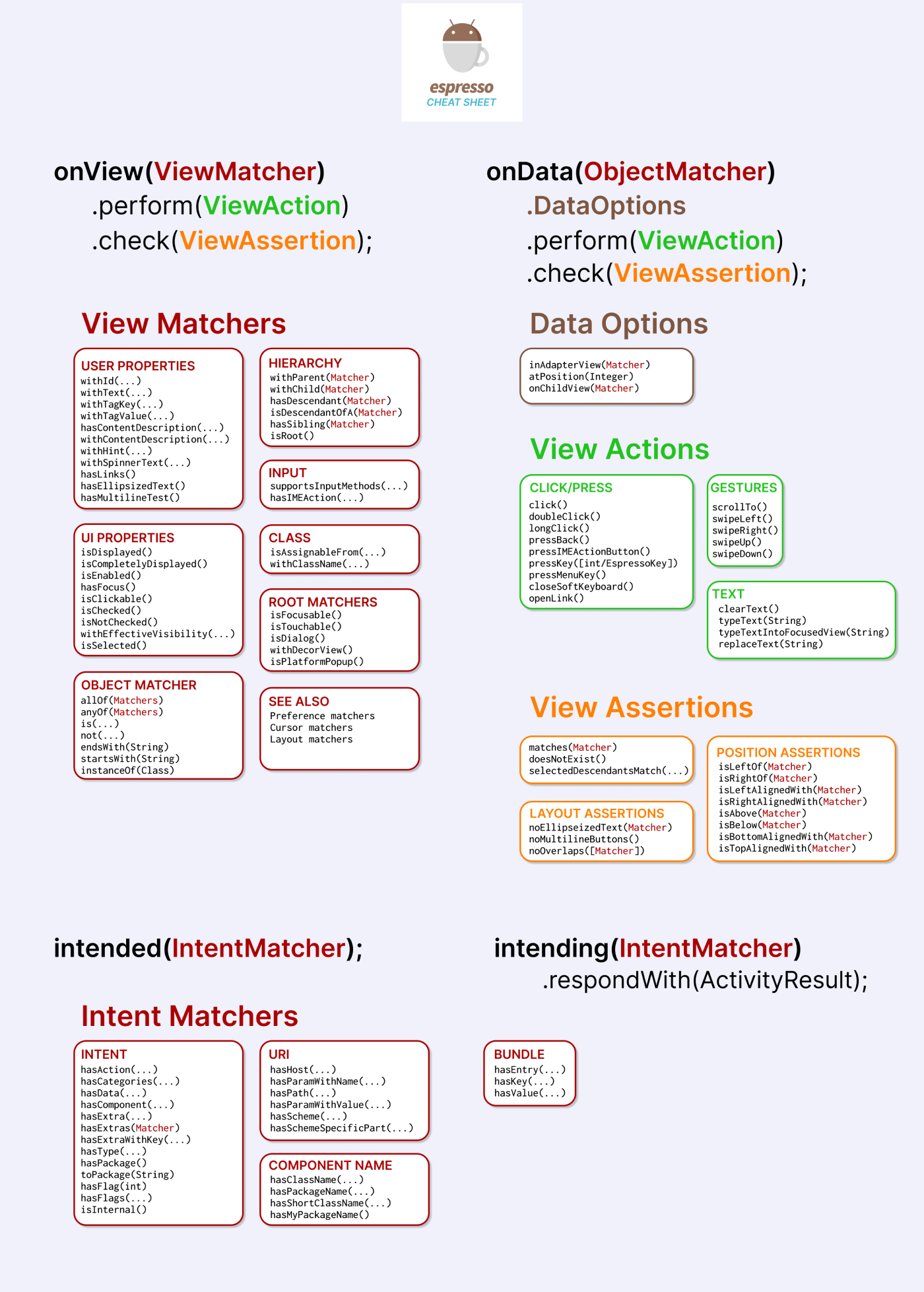 How do I get started with Espresso?

Espresso is a top-notch framework to incorporate into your test automation strategy. Therefore, it's crucial to execute Espresso testing efficiently. Setting up expensive Android device labs can be expensive and hard to scale up. This demands the need for a real device cloud platform like LambdaTest that eliminates the hassle of setting up an in-house device lab. Leveraging LambdaTest’s online device farm, developers and testers can perform Espresso testing on real Android devices from anywhere at any time.

LambdaTest is a leading test execution and orchestration platform that is fast, reliable, scalable, and secure. It allows users to run manual and automated testing of web and mobile apps across 3000+ browsers, operating systems, and real device combinations. Using LambdaTest, businesses can ensure quicker developer feedback and hence achieve a faster go-to-market. Over 500 enterprises and 1 Million + users across 130+ countries rely on LambdaTest for their testing needs.

Getting Started with Espresso testing on LambdaTest

Want to know a fun fact? Your first 100 Espresso test minutes are on us with just a free sign-up on LambdaTest. With a lifetime subscription to LambdaTest, you can also avail benefit from cross browser testing, manual app testing, visual UI testing, responsive testing, and more.

What is Espresso for mobile testing?
Espresso is a native open-source framework for automated UI testing of Android applications. It is part of the Android SDK and is used by developers to create native mobile apps.
Is Espresso used for black-box testing?
Espresso is neither a black box nor a white box testing framework. Rather, it's a grey box testing framework. Since it has the same access to the application's internals as a white box (unit/integration tests), it's named a grey box (black box + white box).
HomeEspresso