A testing pyramid is an essential part of a software tester's strategy. The app needs thorough testing to be released successfully into the world and to successfully test an app. It needs a solid testing strategy. By mapping out your testing efforts in a test pyramid, you can automate some tests more than others and concentrate your efforts on specific platforms for certain types of testing.

The testing pyramid has been helping developers plan automated software tests for over a decade.

In this post, we'll explain what exactly the test pyramid is, why it’s an important part of overall quality assurance, and how LambdaTest agile testing cloud can optimize the time spent on the activities planned at each layer of the Agile Automation Pyramid i.e. UI testing, Service layer testing, and Unit testing.

What is Test Automation?

Software testing comes in two forms—manual and automated. Manual testing is helpful in its way, but automated testing is often more effective. Some kinds of manual testing—such as discovery and usability testing—can be invaluable to your process. Other types of tests—like regression and functional tests—are best done with automation.

Test automation improves software quality by ensuring that all of your tests are run automatically, with their results analyzed and used to improve future development cycles. It requires business analysts to define clear test cases, developers to write code that responds to these inputs, and DevOps engineers to manage test data and interpret results.

What is Testing Pyramid?

Testing Pyramid is a software development framework that can reduce the time required for developers to determine if changes affect existing code. Reducing this time can help foster high-quality code by minimizing development time and fostering a more robust test suite.

The testing pyramid is a model that provides a structure for assessing the types of tests to be performed in an automated test suite. It also defines the order and frequency of such assessments so that rapid feedback can be provided to ensure that code changes do not impact existing functionality. 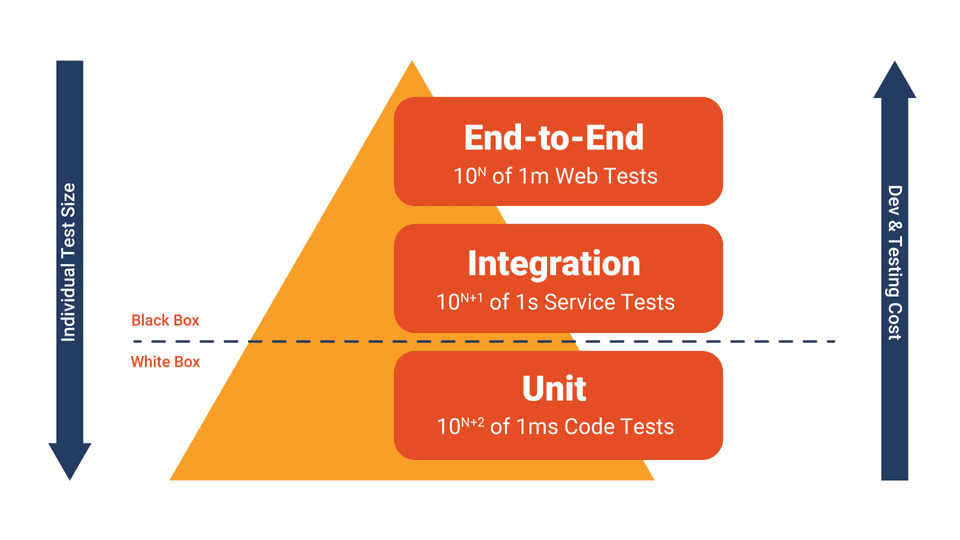 Unit tests form the foundation of the test automation pyramid. The unit test layer is where much of the testing will take place and is normally written by the developer to verify the code they have written. As developers are most familiar with their code and applications, they can quickly come up with good numbers of unit test cases in a short time.

Unlike other tests, unit tests help to reveal bugs (at a unit or block level). The information that developers can derive from unit tests is more extensive than that from other types of tests because the developer can get information about a patch's side effects on different features (that are dependent on the fix) and about the origin of the issue or details about 'where in the code' an error occurred. Hence, unit-test turnaround time is very fast—since developers can verify their fixes and detect any problems during unit testing.

Testers tend to focus on testing the complete product in other types of functional testing, such as integration, system testing, sanity testing, and much more. Hence, it can take a while to validate the fix and report problems, assign issues to developers, and resolve those issues. On the other hand, with unit testing, testing is limited to a feature or requirement and might not be able to locate the system-level problems.

The development of automated unit tests is considered one of the best practices in software development because it can help to ensure a program's quality. Some of the most commonly used tools for unit-testing are 'xUnit variants' that are available for development languages such as JUnit for cross-browser testing using Selenium automation, xUnit.net for .Net, etc.

This layer contributes as much as 50~60% to the performance of a team's Agile Test Pyramid. It is therefore recommended that teams spend sufficient time developing quality unit tests.

Integration tests can be slower and more complex than unit tests because they require interaction with external sources. Along with this, a pre-production environment is necessary to run these types of tests, as is a balance of virtual and real devices.

Software applications rely on the proper functioning their databases, so it's crucial to test that an application interacts with its databases as needed. Before you begin testing this type of integration, you must ensure that the test database is similar to the production database.

Integration testing is not limited only to testing the code's behavior within the application itself. It also includes testing the application's integration with external services, including APIs. You must create a preproduction environment that is as close to the production environment as possible for integration testing with an external web service. But it can be challenging to test every scenario from an integration point of view because it is impossible to control the response from the external dependency, for example, when the external service generates an error case.

End-to-end testing takes the longest to complete and is the most expensive to maintain. It simulates real-world functionality by using a test environment and data, so it has the slowest operating pace. Because end-to-end testing checks assembled applications, it's also the most difficult to identify issues with.

End-to-end tests are the most complete form of testing and can provide a good idea of how a system behaves over time. They can be slower to run than other test types because they rely on external dependencies like integration tests, but they're usually faster to set up.

Complex modern applications are composed of hundreds of components and thousands of dependencies, all deployed on an ecosystem of infrastructure layer which is itself composed of multiple parts working together. All this complexity creates massive avenues of unpredictable failures. A single isolated system could be working smoothly and perfectly.

End-to-end tests rely on user behavior and enable the detection of issues prior to delivering the product to end-users. Because they are performed as part of usability testing, end-to-end tests make it easier to prioritize development activities in the backlog by determining which processes are most significant to users in real life.

Why Use Test Pyramid?

When you perform manual tests, it’s not just the application you need to test, you also need to consider the environment in which you are doing so. Doing so is time-consuming and less accurate than automated testing. You also need to keep testing the application after every update. And you might have to test the same feature multiple times. It’s easy to get bored of repetitive tasks, which can lead to carelessness or negligence and ultimately mistakes on your part.

Why should Agile Teams use the Testing Pyramid?

Agile processes prioritize speed and efficiency. The agile testing pyramid streamlines the testing process by giving testers a logical progression and advancement in which to test. Since the test pyramid is designed to run the simplest tests first, testers can manage their time better, achieve better results, and deliver faster than traditional methods.

The testing pyramid offers the QA team a means of establishing priorities. Suppose test scripts are created with a stronger emphasis on testing the user interface, core business logic, and back-end operations. In that case, the QA team can more adequately test product quality and increase overall test coverage. Furthermore, high TAT (turnaround time) for UI testing can be reduced by adopting this strategy.

Now that you know the blocks that make up the Pyramid model let's explore some high-impact benefits.

The test pyramid is an effective way to organize your testing efforts, but you can do a lot more to improve testing. Here are some best practices:

LambdaTest – Achieving The Best Out Of Agile Test Pyramid

Even though you use an Agile testing methodology, you may want to optimize certain testing jobs to take advantage of your resources. Creating a test infrastructure that works across browsers and operating systems can be expensive; however, if you are building a web product, it is important to ensure that your code works in those environments.

As a product owner or scrum master, you create the most efficient schedule possible to meet project deadlines. Using LambdaTest's automation tools, you can significantly reduce the time required to run UI tests, service layer tests, and unit tests. With LambdaTest's cloud-based cross-browser testing tool, you can run functional tests against multiple browsers and operating systems to ensure that your application is compatible with the broadest range of devices.

LambdaTest helps you accelerate the testing activity planned in each user story with the help of Real-time testing, Visual UI testing, and automated cross-browser testing features.

To ensure a competitive edge in today's business environment, time to market is critical in any business. Any delay in your project deadlines could result in significant losses to your company. Companies can boost productivity, reduce time-to-market, and improve quality by using agile testing instead of a traditional testing model.

To cut costs and improve quality, using an agile testing approach focusing on unit testing, API testing, and UI testing would be beneficial. You can make the most of this approach by using a cross-browser testing platform like LambdaTest that can speed up visual UI tests and automate other types of tests. When planning your test strategy, it is essential to chart out each user story before you begin implementing agile methods.

Through this extensive Test Pyramid tutorial, we hope to answer every question you have regarding Test Pyramid.

What is a test pyramid?

The testing pyramid is a concept that groups software tests into three categories: unit, end to end, and integration. By understanding how each category differs, developers and QA professionals can build a more robust test suite that identifies bugs more quickly and with greater accuracy.

What is testing automation pyramid?

The Agile Test Automation Pyramid was created to illustrate the most efficient way to implement automated software testing. The pyramid splits types of testing into three layers based on the return on investment (ROI) offered by automating that particular type of test.

What does the test pyramid emphasize?

Who came up with the testing pyramid?

The test pyramid is a concept developed by Mike Cohn in his book Succeeding with Agile. It illustrates how automated tests should be prioritized when creating a testing strategy for software development.