TestCafe is a free, open-source testing tool that you can use to automate web testing. It works on any operating system (Windows, macOS, Linux) and can be installed using a single command. TestCafe supports JavaScript, TypeScript, and CoffeeScript without configuration, so you can start testing immediately. TestCafe is available for you to use under an open-source MIT license. You can use it for free in your development.

Note: You can also run your TestCafe test scripts on LambdaTest cloud.

The Rise of TestCafe Framework

TestCafe Studio was engineered from scratch for modern web and browser applications and did not rely upon Selenium or other legacy testing platforms. TestCafe Studio was created with developers and QA engineers in mind so that they can simplify the testing process. In addition, with LambdaTest’s scalable, cloud-based infrastructure, you can efficiently parallelize your TestCafe test scripts to improve your execution speed dramatically.

TestCafe is a popular test automation framework, according to the data on its official GitHub repository:

As of this writing, TestCafe had 254,003 weekly downloads on NPM. 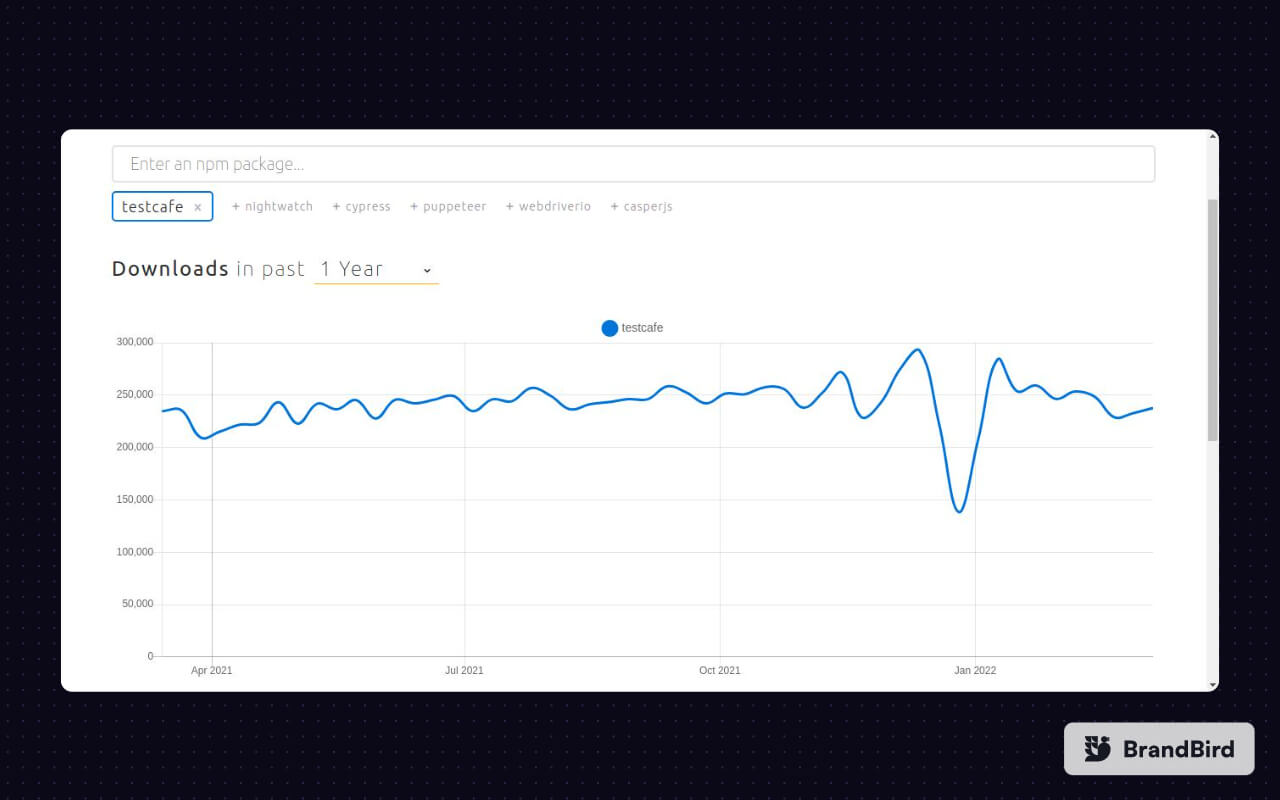 As per The State of JS 2021 Survey, TestCafe has the highest counts in the “Other tools” category. This indicates a positive rise in its usage and popularity.

TestCafe has several features that make it easier to use than competing solutions.

Here are some of the key features of the TestCafe framework:

Here are some Playwright testing drawbacks:

TestCafe's hybrid client-server architecture means it can execute both system-level and browser code in real-time.

TestCafe’s architecture combines the browser and Node.js. An early version of TestCafe ran entirely in the browser, but a hybrid architecture allowed us to improve test stability and extend the framework’s testing capabilities.

TestCafe was released in 2016 and quickly became known as a competitor to Selenium, the most popular framework for web application testing at the time. It was difficult to set up a robust testing framework using Selenium; one had to install JDK, TestNG/JUnit, and many other jars as per the requirement of the framework. The test automation framework setup took a lot of time and effort and was difficult work, especially for novice automation QAs. Moreover, even after setting up the framework, results were not satisfactory due to test flakiness and slowness.

In October 2016, the DevExpress team announced a NodeJS-based automation framework that worked out of the box. Since then, they have maintained its zero-configuration policy at TestCafe.

TestCafe vs Cypress: A Detailed Comparison

Cypress uses the Mocha test runner, with Chai for assertions and Sinon for mocking. This will make most JavaScript developers feel immediately at home. It also queues up your asynchronous tests so they look like synchronous code.

On the other hand, TestCafe uses a test runner that initially seems a bit strange, but a lot of testers prefer it makes you explicitly use promises and async/await to manage execution.

TestCafe works by serving the test site through a proxy server that injects scripts into the page. These scripts can inspect and control elements on the page, as well as interact with native alerts, file upload inputs and iframes. This allows it to work in any web browser, including mobile devices and cloud services like LambdaTest.

Cypress is a test runner that controls the browser via its proprietary automation APIs. Because Cypress uses these APIs instead of Selenium WebDriver, it needs a new driver for every supported browser. As of early 2018, it supports Chrome and family (Chromium, Electron) and Firefox, with plans to add Edge and Safari support later on. It also has plans to support older browsers via Selenium WebDriver.

Cypress runs your tests in the browser, whereas TestCafe runs them in Node. This means that Cypress tests can access real DOM elements but in TestCafe you must serialise the communication between your tests and the DOM.

TestCafe can call out parts of your Node server application directly from tests. This allows you to easily set up and clear database fixtures or start and stop your test server. Unfortunately, Cypress doesn’t let you communicate with your app via HTTP or execute shell commands.

Both TestCafe and Cypress are great tools for testing web applications. We look forward to seeing how they continue to improve in the future.

TestCafe is compatible with all major browsers, including:

How To Run TestCafe Tests on LambdaTest?

TestCafe cloud grids like LambdaTest allow you to perform TestCafe testing at scale. LambdaTest allows you to perform automated cross browser testing on an online browser farm of 40+ browsers and operating systems to expedite the test execution in a scalable way. Moreover, it increases the test coverage with better product quality.

To run your first TestCafe automation testing script online, refer to our GitHub repository. No need to worry about the challenges with TestCafe infrastructure. Want to know a fun fact? Your first 100 TestCafe automation testing minutes are on us with just a free sign-up. You can also avail benefits of manual cross-browser testing, responsive testing, and more with a lifetime of free access to LambdaTest, the world's fastest-growing cloud TestCafe Grid.

Our detailed documentation will help you develop a better functional understanding of the TestCafe framework. Finally, kick-start your TestCafe automation journey by running your first TestCafe test script on the LambdaTest cloud.

What is TestCafe?
TestCafe offers a comprehensive, and extensive platform to perform End-to-End tests for node.js applications. It supports both JavaScript and Typescript, so you can write tests in either one of the two. With TestCafe, you can create stable tests which are easy to integrate with your continuous integration process. You can also execute multiple test cases in parallel.
Is TestCafe better than Selenium?
Testing in the same language as the application's source code is beneficial if you want to test in multiple languages. TestCafe, which uses JavaScript for testing, is better for testers who are not familiar with JavaScript. Selenium may be a better option if you want to run tests in multiple languages across multiple browsers.
What language is TestCafe?
TestCafe can be used to write tests using TypeScript or JavaScript (with modern features like async/await ).
Does TestCafe use Selenium?
TestCafe is different from most testing tools because it doesn't use Selenium. This gives us the opportunity to implement features that are difficult or impossible to find in Selenium-based solutions (for example, testing on mobile devices, user roles, automatic waiting, etc.). TestCafe uses a URL-rewriting proxy which allows it to work without the WebDriver.
How can I automate with TestCafe tests using LambdaTest?
The LambdaTest Automation Grid allows you to run end-to-end automation tests on a secure, robust, and scalable cloud-based infrastructure. You can perform automated browser testing with TestCafe across 3000+ browsers and operating systems using LambdaTest with a minor tweaks in your existing test scripts. All you need to define is a remote webdriver path, your LambdaTest username and access key in your code, along with the desired capabilities to trigger your TestCafe tests on the LambdaTest cloud.
Is TestCafe easy to learn?
You can easily choose the elements you want to interact with when using TestCafe. In addition, testCafe tests are entirely on JavaScript, which communicates directly with the browser's Document Object Model (DOM). As a result, learning TestCafe's APIs is easier than learning Selenium's APIs.
HomeTestCafe