This article is a part of our Content Hub. For more in-depth resources, check out our content hub on A Detailed TestNG Tutorial.

In the previous article, we learned about creating a TestNG project in Eclipse and how to run our first ever Selenium Test Script. Now that you know how to run a TestNG project Eclipse, it is time to dig deeper into TestNG. So far, you’ve run only a single test script, but in practical scenarios, that simply won’t do. When it comes to test automation, running one test at a time will not be very beneficial. You will have to run multiple test cases to make the most of a Selenium Grid. In this tutorial, let’s dive deep into how we can execute multiple test files from a single file known as the TestNG XML file. We will also see how we can create and execute a parallel testing suite using a TestNG XML file.

In case you are late to the TestNG tutorial series, here’s a step-by-step guide to install TestNG in Eclipse.

What’s the purpose of a TestNG XML File?

The entire point of using a TestNG framework for Selenium automation is to run tests in parallel, i.e. run multiple tests simultaneously. In Java, you have to create test cases separately and then define the test later in the primary method. On the other hand, TestNG allows you to create multiple test cases simultaneously, and that is where the TestNG XML file comes in. A TestNG XML file eases this task, and we can write various test cases all within single or multiple classes using annotations. (Refer: TestNG Annotations Tutorial for Selenium test automation)

Now you can copy the above code (with your choice of names) on the TestNG XML file we’ve created above. 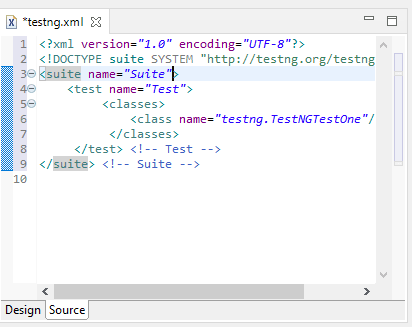 The hierarchy of an XML file is quite straightforward. It goes something like this- first < suite > tag, second < test > tag and lastly, < classes > tag. As mentioned above, you can give any name to the suite and test tag, but you have to be careful while naming classes since it is a combination of the Package name and Test name.

This example will help you understand it better.

Here, I have created two Java classes- one that opens up Google & verifies its title and another one which again opens Google & searches for a string.

Next, we will create the TestNG XML file that uses both the above-defined test cases.

In the XML above, you can see two class names are written under the test name tag. These are the classes that I would want to run using the TestNG XML file. Also, note that I named my test “Google Test” and suite “Test Suite” respectively. Go ahead and choose any name as per your convenience for these two.

The next step is to run the project using the XML file. Right-click on the testng.xml file and navigate to “Run As >> TestNG Suite.”

By doing this, you would not have to run the classes individually; instead, we will be executing both the classes by a simple click. The output after the execution would look like below- 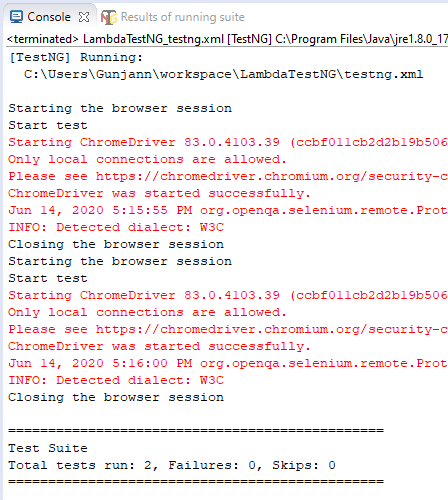 You can see for yourself that the test classes mentioned in the XML ran successfully, and with it, you can now create your own test suite and run multiple tests all in one go and subsequently get the results.

Now that you have executed your TestNG.xml file successfully. It is pivotal to note the changes you need to make into the TestNG.xml for Selenium test automation over a cloud-based Grid. Because at the end of the day you want a more practical approach and configuring hundreds of browsers and operating systems in your nodes doesn’t look feasible enough.

You can leverage a cloud Selenium Grid such as LambdaTest which provides 2000+ real browsers and operating systems online. That way, you only need to focus on writing better Selenium automation scripts.

So let me show you how you can leverage testng.xml to run parallel testing with Selenium on LambdaTest.

Let us have a look at our Java test file.

All of these details can be found on your LambdaTest automation dashboard.

By far I am sure you’ve realized the importance of using TestNG.xml for running scripts on cloud Selenium Grid. It is simple really, you don’t want to write down hundreds of test files to test the same scenario over hundreds of browser drivers. Which is why you will need a TestNG.xml file which will allow you to run a single test file over numerous combinations of parameters and values specified in it.

For this purpose, you invoked the Parameters annotations in TestNG. – @org.testng.annotations.Parameters(value={“browser”,”version”,”platform”})

Now you need to provide values to these parameters in your testng.xml file. Then you will be able to run a single test across several browsers, simultaneously.

If you go to your LambdaTest platform now. You will notice that the same test has been triggered over multiple browsers + operating systems combinations. Just as we specified in our TestNG.xml file.

This is the reason why Parallel testing is one of the most in-demand features of Selenium automation testing thus learning how to maintain Selenium test automation will help you.

A Selenium Grid would really boost up your test build practices. Instead of creating new test cases for individual environments, you can leverage testng.xml to define those environments as parameters and simply run a test on various parameters.

Why break your back when you can run parallel tests on a Selenium Grid cloud?

LambdaTest provides a cloud Selenium Grid where you can run your Selenium test scripts over 2000+ real browsers in parallel.

In our upcoming posts, we will learn about TestNG reports and how we can use the different types provided by the framework. Stay tuned and Happy TestNG! 😉