One of the most performed actions of any webpage tester is taking a screenshot of the webpage. Whenever a tester finds and reports a bug, that bug would not be taken seriously without supporting screenshots or even videos of the issue. This is equally true no matter the type of testing you are doing and that includes selenium automation testing.

In automation testing, especially where a typical test run may involve hundreds of commands and test cases, automated screenshots taken at critical assertions are important for developers and testers in making sure that every test case executed as it should. These proofs are in-turn used for debugging, to find out what went wrong and the reason for failure. For Selenium, these screenshots help to distinguish whether the failures are due to application failure or due to script failure.

Now with that said, when we say screenshot we could mean capturing an image of any part of the screen including the image of an element in question or even a screenshot of the whole page. Therefore in this post, we would be looking at how you can take automated screenshots of web pages for different purposes using Selenium WebDriver automation scripts. To start off, there are four major ways of capturing screenshot images using Selenium Webdriver. Such as :

You can also refer to the below video tutorial on How To Take Screenshots In Selenium testing.

You can check the detail of the interface here.

This interface provides a method known as getScreenshotAs which helps to capture the screenshot and store it in the desired location.

Here’s the syntax to capture the screenshot:

In order to store the taken screenshot into a file, the below statement is used:
FileUtils.copyFile(screenshotFile, new File("path of the file you want to save the screenshot to"));

This is it! Just two statements and you will be able to take the screenshot. Let’s incorporate this step into a code snippet. The below example showcases Airbnb stay details page example where we are taking a screenshot of the viewable screen:

The code snippet above will take the viewable screen screenshot as below:

AShot() is a webdriver screenshot utility to capture entire page screenshot and is natively supported from Selenium 3 onwards. It provides the following features:

For more details on the utility, you can refer here.

In order to take a screenshot of the entire screen, you need to add the jar into your project. You can download the jar from here http://central.maven.org/maven2/ru/yandex/qatools/ashot/ashot/1.5.3/ashot-1.5.3.jar

Once the jars are added into the project, all you need to do is mention the below lines of code when you intend to take the full-screen screenshot:

In the code below, the Ashot method shooting strategy is used by setting the viewport to full screen and taking screenshots. This code snippet below goes to Airbnb India Stays and Tours page and takes a screenshot of the full view.

As you run this code, note how the code automatically scrolls down the page and takes the screenshot of the entire page. Below is the example of the taken screenshot.

Taking screenshot of a desired element is also pretty easy. The main concept is to crop the full screenshot to the desired location of the webElement based on its coordinates and height-width. Here’s a code snippet below highlighting how you can take screenshot of just the logo of Amazon.com website.

Here’s the image was taken by the above code snippet of the webElement:

This is it. Isn’t it cool guys. Just find out what your test scenario wants and take the required screenshot. Nowadays we do not need to take screenshots because of so many upcoming cloud-based platforms providing support to all those screenshots and videos to your automation scripts execution.

This brings me to my last approach of taking a screenshot which eventually means not taking one ? and the tool doing its job. Well, you heard it right. Let’s look into its details

Running tests locally is important however if you want to make sure that your website works on all browsers, even those you don’t have access to locally, you would need service like LambdaTest. LambdaTest is a cloud based selenium grid that you can use to run all your automated selenium test scripts online. The best part about LambdaTest grid, however, is that it takes automated screenshots of your webpage after the execution of each selenium command. In addition, LambdaTest platform takes a complete video of the test execution as well. All you need to do is run your scripts on this platform which provides you features like screenshots, videos, network logs, console logs and so on. Few points of consideration or pre-conditions to make your script running on the platform is:

This is it. Now let’s run our same above-mentioned code of Airbnb Stays detail page without the need of providing the screenshot method since it captures the whole video of the execution. In the below code snippet I will be using LambdaTest username, access key, and LambdaTest Selenium Grid URL to connect to the required browser and perform actions. Notice that changing the above code into LambdaTest compatible code required only to call remote webdriver instead of local chrome webdriver, and passing on a desired-capabilities object to define which browser you need to run tests on.:

The referenced screenshot below: 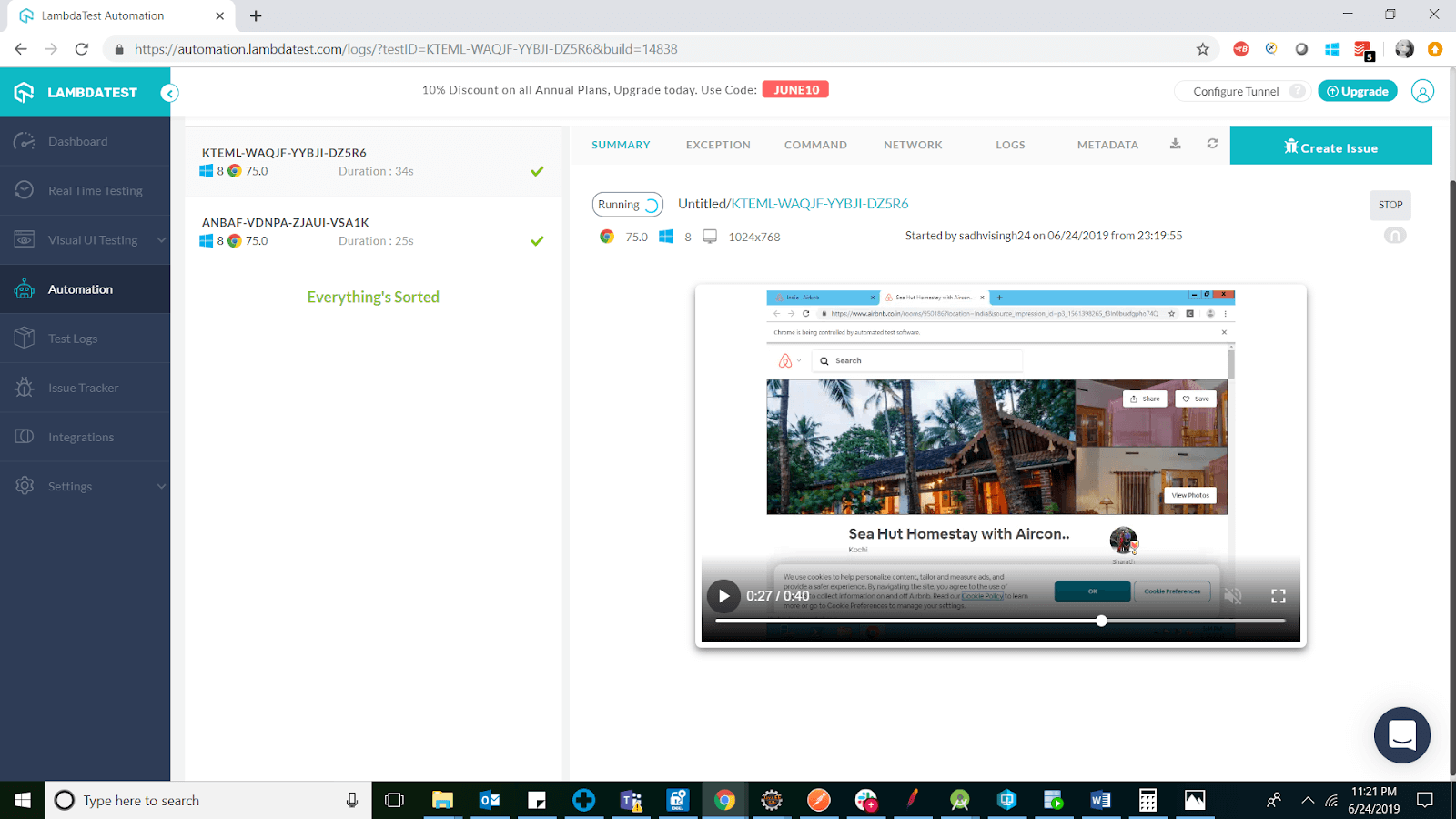 In the screenshot above, LambdaTest provides support of video where you can view the whole execution flow of your web app.

Apart from this LambdaTest also provides a standalone full paged automated screenshot feature, that can help you to take screenshot across browsers of your designated application and even compare them. LambdaTest calls this feature as ‘Screenshot testing’. You can access these screenshots as and when required and even share them with the required stakeholders and mail them as per needs. This feature comes in handy when you got to test your application across multiple browsers and versions and perform cross browser testing. You can take screenshots and compare them for any UI issues. Isn’t it miraculous and just imagine the amount of time you just saved. 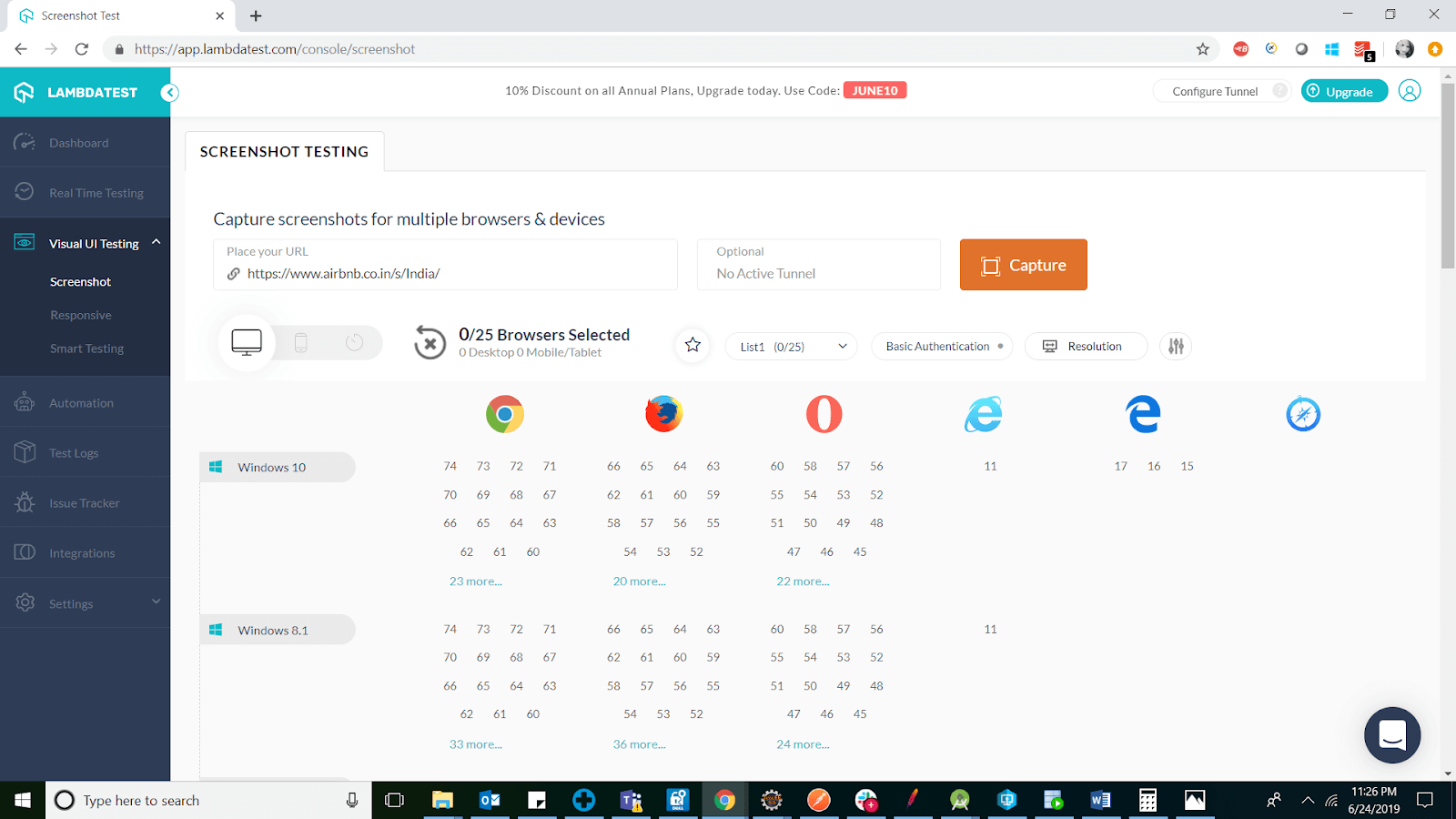 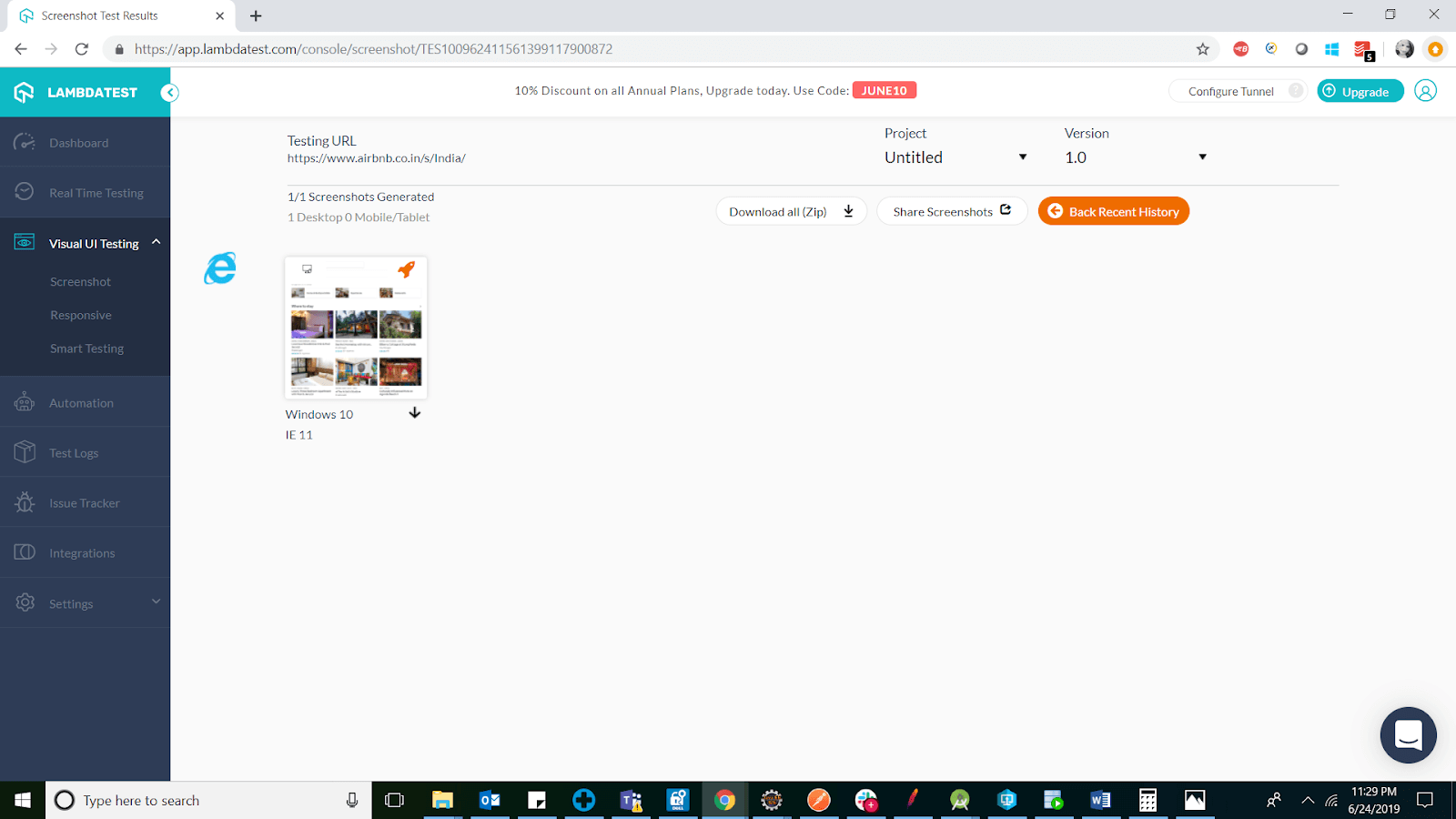 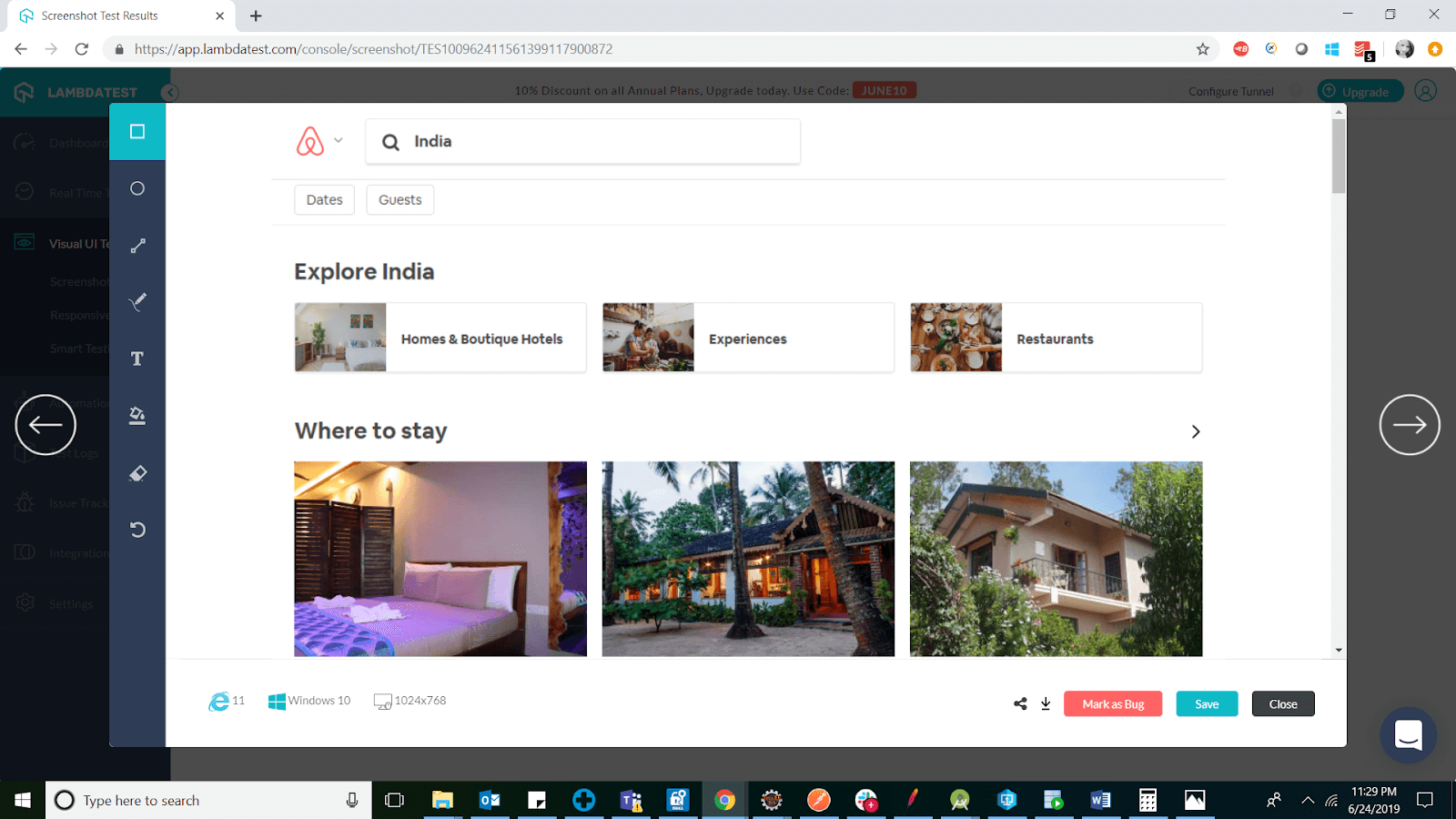 As you saw above, we focused on all possible ways of taking screenshots in detail, so next time when you are stuck on how to take a screenshot, this article will come in handy. You can also refer to my other articles as part of this series. Happy testing. 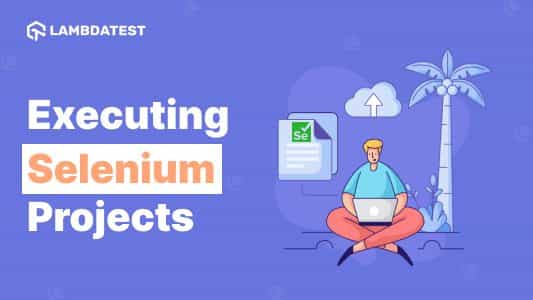 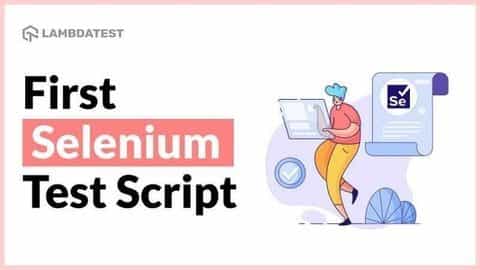 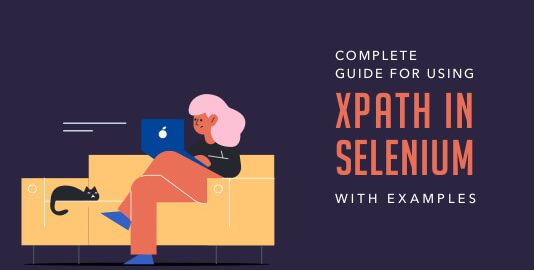 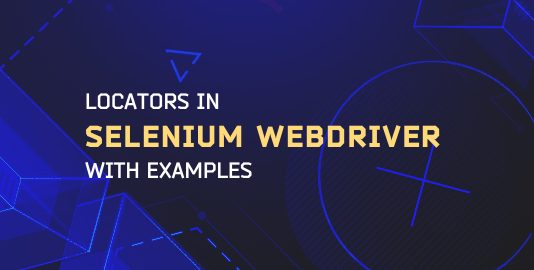 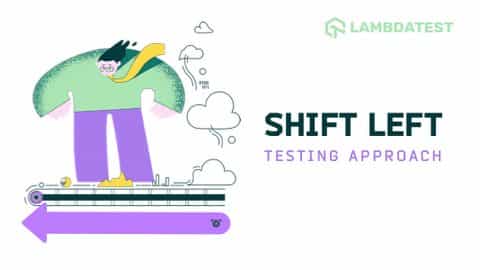