In software testing, there are many different methodologies and techniques used to test software. Black box testing is one of these techniques that can help us determine the quality of a product with a high degree of confidence.

It focuses on the functionality of a program and ignores the internal working of the code. These tests will be done by a tester or a team of testers without access to the source code. This gives them an advantage over White box testing since they can test a software application without actually knowing how it was developed.

What is Black box testing?

Black box testing is a software testing method that examines the software without prior knowledge of its internal structure. The term is often used to refer to functional testing or acceptance testing, although the latter may also be referred to as White box testing or clear box testing. The terms may be used interchangeably, with some sources defining "White box" as synonymous with "clear box" and "Black box" as synonymous with "Black-box."

Black box testing can be contrasted with White box testing, which involves a more in-depth knowledge of the software's implementation details. In theory, Black box tests can be run by anyone, independent of the development team, and a developer's familiarity with the code should not affect how well their code is tested; conversely, White box tests tend to require a developer's intimate understanding of the code to construct test cases.

So the primary job of a software tester during Black box testing is to test the functionalities of software applications when the internal paths & code structure are not known.

The customer's set of detailed requirements for the product is tested in Black box testing. These requirements are related to different functions, so a tester chooses a function, enters an input value, and examines the output. If the function's result is correct, it is passed in testing.

It is also sometimes referred to as behavioral testing, as instead of the technical perspective, behaviors are considered from the point of view of a software program in various situations.

Why should we perform Black box or behavior testing?

The need is to determine how a software program behaves instead of focusing on the technical aspects under various conditions. It also helps you to identify different errors like: 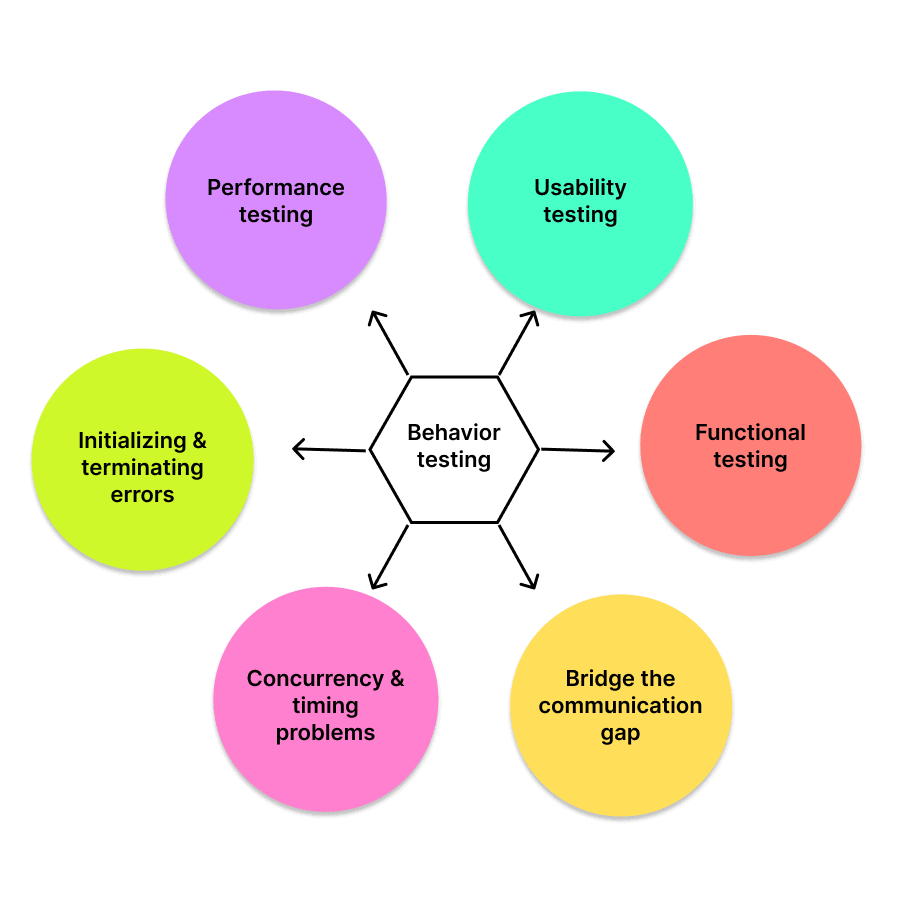 By definition, Black box testing is done without seeing the inner workings of the application. That said, there are still limitations to what you can accomplish with this method.

We test the functionality of a software program by specific functions or features of the software. The functional requirements of a system are tested, for example, logging in to an eCommerce site through the correct credentials & also checking through the wrong credentials whether the desired output is obtained.

After a fix, upgrade, or other system maintenance, regression testing is done to ensure the new code hasn't adversely affected existing code. It is used to determine whether a new version of the software performs as well as or better than the previous version. It's possible that a fixed defect could have introduced another defect.

Many different Black box test techniques help in testing various features of the software. There are several techniques available out there, but not all of them can be used for every type of application. Some basic Black box testing techniques are:

In this, we need to break up possible inputs into groups and test one example input from each group. An equivalence class is a set of data items considered equivalent to each other, so it will receive the same processing when sent as input to an application.

For example, a food company's software might charge different subscription fees for people who are already members for 2 years & different for new members. In this case, it is sufficient for testers to check only one case from each group.

For example, a specific field may accept only values within that range, like supposing a range is 0 to 100. The tester will see if the system accepts and rejects inputs correctly when the number above is entered.

Testing the application’s behavior based on different combinations of input values is called decision tables testing. Many systems provide outputs depending on the conditions in which they are operating. The columns each have a unique combination of elements. Testers can identify the conditions that must be satisfied for a rule to apply, determine the outcome of each rule, and design a test case for each rule. The functions that have a logical relationship between two or more inputs are appropriate.

It is a way to determine what the software application does when different values of input are given to the same function. Generally used in cases where there is a transition from one state to another. Like in the case of the login mechanism where after a specific number of failed login attempts, it goes into a transition where the locking of the account takes place.The testers here design test cases that probe the system when it transitions states.

This technique involves identifying common errors developers make when building similar systems. It’s a way to identify errors without setting forth a specific method. The tester will be guided by experience when trying to find unknown problems in software here.

Use case testing is a form of software testing that uses use cases. As per the usage of the system, they are used to identify the test cases from start to end. A test scenario is created based on the functionality of each function from beginning to end.

It's a technique that explains the relationship between a result and all the factors that impact it. Dynamic test cases are used here. This technique, also called the cause-effect graph technique, is based on a collection of requirements and is used to determine the minimum number of tests that can cover the maximum number of sections in the software.

The cause-and-effect graph technique can convert the requirements specification into a logical relationship between input and output conditions.

It is also known as pairwise testing. It is used to test all the possible combinations of values. The applications that use checkbox input, radio button input, list box, and text box use this combinatorial method.

With so many options to choose from, it can be hard to find the Black box testing tools you need to test applications. Here are some of the most common tools

How to perform Black box testing?

While performing Black box testing, you must also take different browsers, browser versions, devices and operating system into account. It ensure your software applications works perfectly across each configuration.

Instead of procuring every browsers, devices and OS for your target audience, consider using a cloud-based testing infrastructure like LambdaTest.

LambdaTest's real device cloud offers 3000+ real browsers, devices and OS for manual and automation testing. Therefore, you can check how your website or app renders and works on different browsers, devices, and OSes. With LambdaTest test automation cloud, you get faster test execution speeds and faster developer feedback. This in turn cuts down overall costs related with finding issues at later stages of software development.

Subscribe to the LambdaTest YouTube Channel and stay updated with the latest tutorials around Selenium testing, End-to-End (E2E) testing, CI/CD, and more

Why is it called Black box testing?

Black box testing is a method of software testing in which the tester has no prior knowledge of the system being tested.

What are the characteristics of Black box tests?

It tests the application's functionality and its non-functional requirements. Testers don't need access to the software's coding/design/internal architecture. This allows them to work independently from developers

What are Black box testing types?