With 4.25% of browser market share worldwide in June 2020 as per statcounter, Mozilla Firefox browsers are considered inevitable for every Selenium testing checklist. Mozilla developers introduced Geckodriver, also known as the Selenium FirefoxDriver to help testers to automate browser test on Firefox browsers.

What Is a Selenium FirefoxDriver?

Should You Include GeckoDriver In Your Selenium Testing Scripts?

Now, 8.48% looks a lot less when compared to 69.42% market share of Google Chrome but did you notice something?

Mozilla Firefox is the third most popular desktop browser and is having a neck to neck race with Safari.

So, Should You Include FirefoxDriver In Your Selenium Testing Scripts?

Yes, without a doubt. Having a solid 8.48% browser market share, Firefox browsers has become inevitable for cross browser testing. If you won’t include FirefoxDriver in your Selenium testing scripts then you could miss out on a lot of potential leads and promising customers.

With that said, let’s download & set up the Selenium FirefoxDriver in your operating system.

Step 3: Copy the GeckoDriver (geckodriver.exe) to the folder where the Firefox browser is located. By doing so, you can avoid giving the absolute path of the Selenium GeckoDriver if the Selenium FirefoxDriver instance is created in the test code. 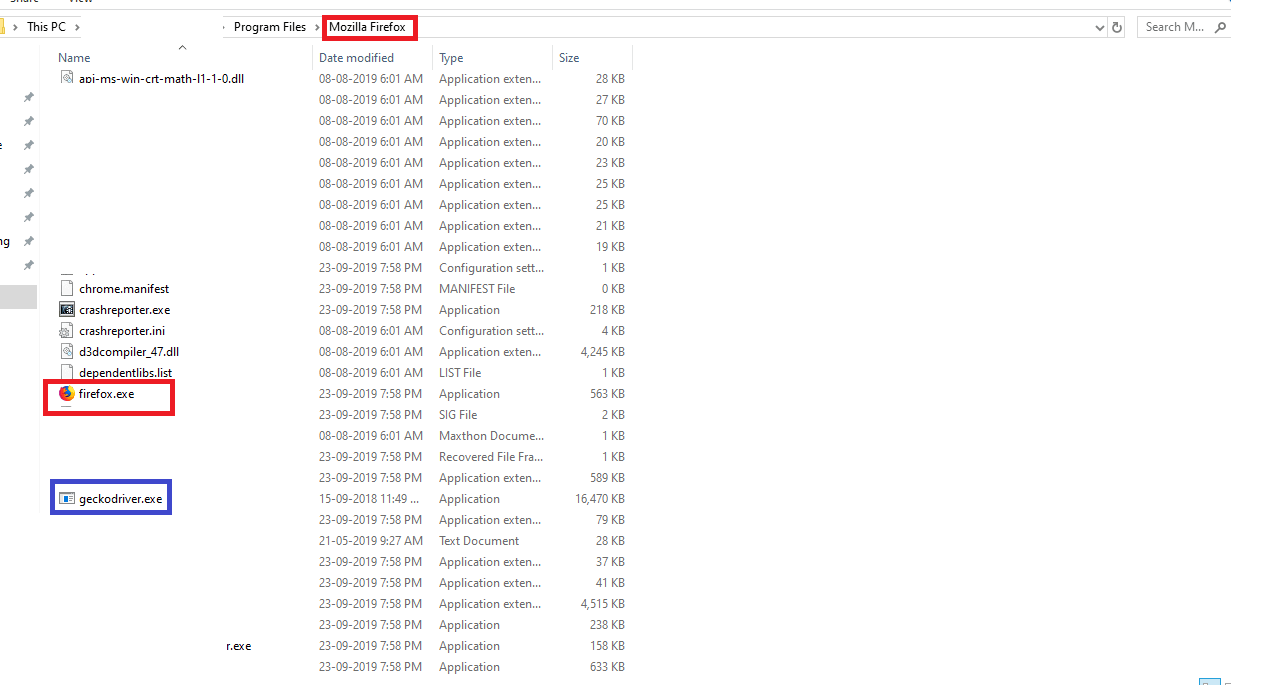 For further demonstration, we will be using the Selenium for GeckoDriver with NUnit framework for running Selenium C# testing. If you are new to Selenium C#, you can refer to our Selenium C# tutorial.

NUnit is a popular open-source web-testing framework. It is used with Selenium C# for automated browser testing. The extensive feature-set of the NUnit framework makes it a more popular framework when compared to other frameworks like MSTest/Visual Studio, xUnit.NET, etc. These frameworks can also be used with C# and Selenium test suite.

Assertions in NUnit are instrumental in making the code more modular so that less effort is spent on the maintenance of the source code.

Here is the basic execution flow of an NUnit test. The necessary steps for Initialization and De-initialization are performed as a part of the [Setup] and [TearDown] annotation.

With the basic flow in mind. Let’s get our hands dirty with test automation using Selenium and Geckodriver with NUnit. To demonstrate Selenium test automation with NUnit, we have two sample test cases; details of which are mentioned below-

Since Firefox browser is used for cross browser testing, we created a Firefox Web Driver instance before any of the tests are executed. IWebDriver (which is a part of OpenQA.Selenium namespace) is used to create the Selenium FirefoxDriver instance.

Using the Inspect tool of the Firefox browser, we find elements (check-boxes) with name li1, li2 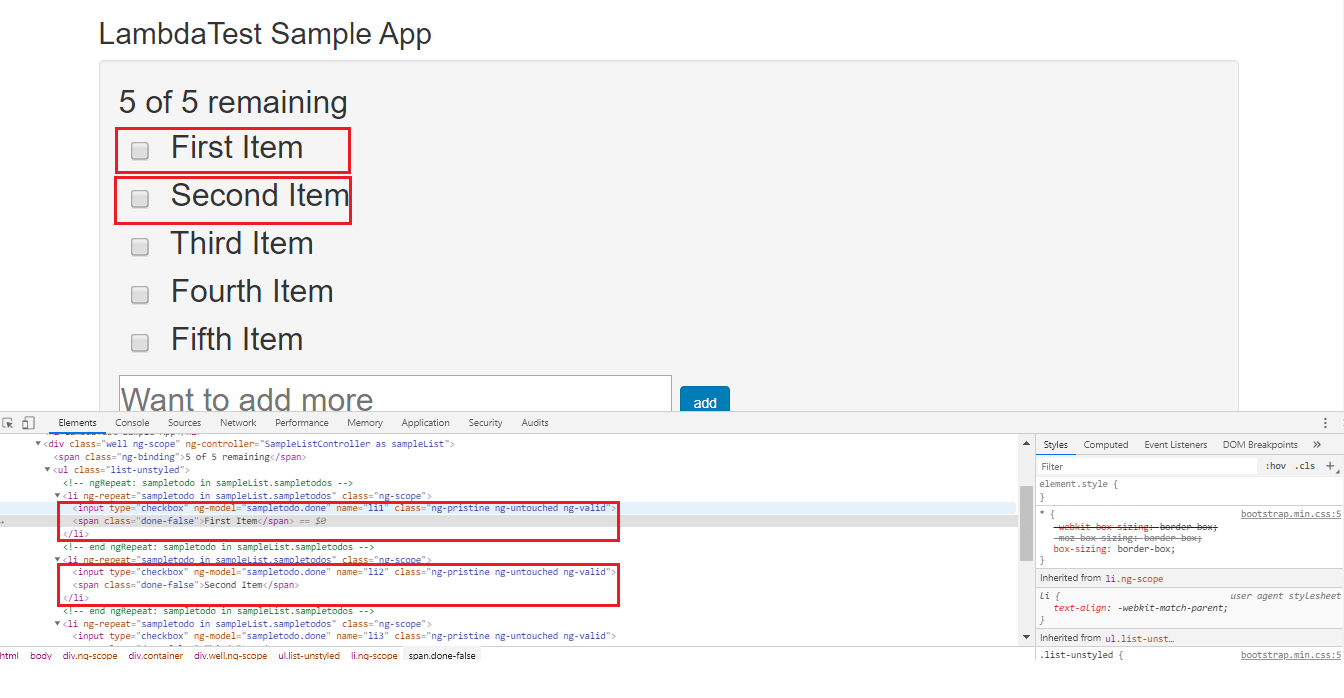 Once the check-boxes are located, we locate the text-box where the target text has to be added. We make use of XPath to do the same. Assert with Boolean condition constraint is used to verify the correctness of the test case.

To locate the element with display name Automation, we make use of the ExecuteScript method to execute JavaScript in the context of the current window.

We perform a vertical scroll by 500 pixels since the element being searched can only be located after the scroll.

Wait of 30 seconds is added to ensure that the element is visible. Once the element (name = Automation) is visible, a Hover operation is performed using the MoveToElement() method of the Actions class.

A click on the ‘Learn More’ link for the Automation option (shown in the earlier snapshot) is performed. Once the new page opens, a comparison of the expected window title with the title of the current page is performed using EqualTo constraint. Assert is raised if the titles do not match.

Kudos! You have executed the test cases using the Selenium FirefoxDriver & NUnit framework on your machine.

“How do you plan to test these scripts over multiple Firefox browser versions?”

A better option for improving the test coverage is to perform Selenium automation testing on a cloud-based cross browser testing like LambdaTest. Using LambdaTest, you can perform automated and live interactive cross browser testing on 3000+ real browsers and operating systems. With LambdaTest, you can test over legacy & latest browser versions of Mozilla Firefox, Google Chrome, Safari, Opera, Edge, and more. Plus you can leverage our online Selenium Grid to help you execute multiple instances of Selenium FirefoxDriver in parallel.

To get started, you need to create an account on LambdaTest. Once the account is created, you should make a note of the user-name & access-key required for accessing the remote Selenium Grid on LambdaTest. This information is available in your Profile section of LambdaTest.

You can generate browser and platform capabilities on which testing is to be performed using LambdaTest capabilities generator. Shown below are the desired capabilities for Firefox 62.0 on the Windows 10 operating system:

For demonstration of Selenium test automation (using NUnit framework) on the remote Selenium GeckoDriver/ FirefoxDriver, we port the previous example implementation to make it work with LambdaTest infrastructure.

Below are the overall requirements for automated cross browser testing:

In the current test case, we import the OpenQA.Selenium.Remote package/namespace where RemoteWebDriver class is defined.

Username and access key combination is passed to the remote Selenium Grid on which Selenium automation testing is performed.

The browser & platform capabilities that are generated using the LambdaTest capabilities generator passed as an argument to the Remote Selenium FirefoxDriver interface.

After you execute the test scripts using Selenium, Geckodriver & LambdaTest, you can visit Automation Logs to check the status of the test. 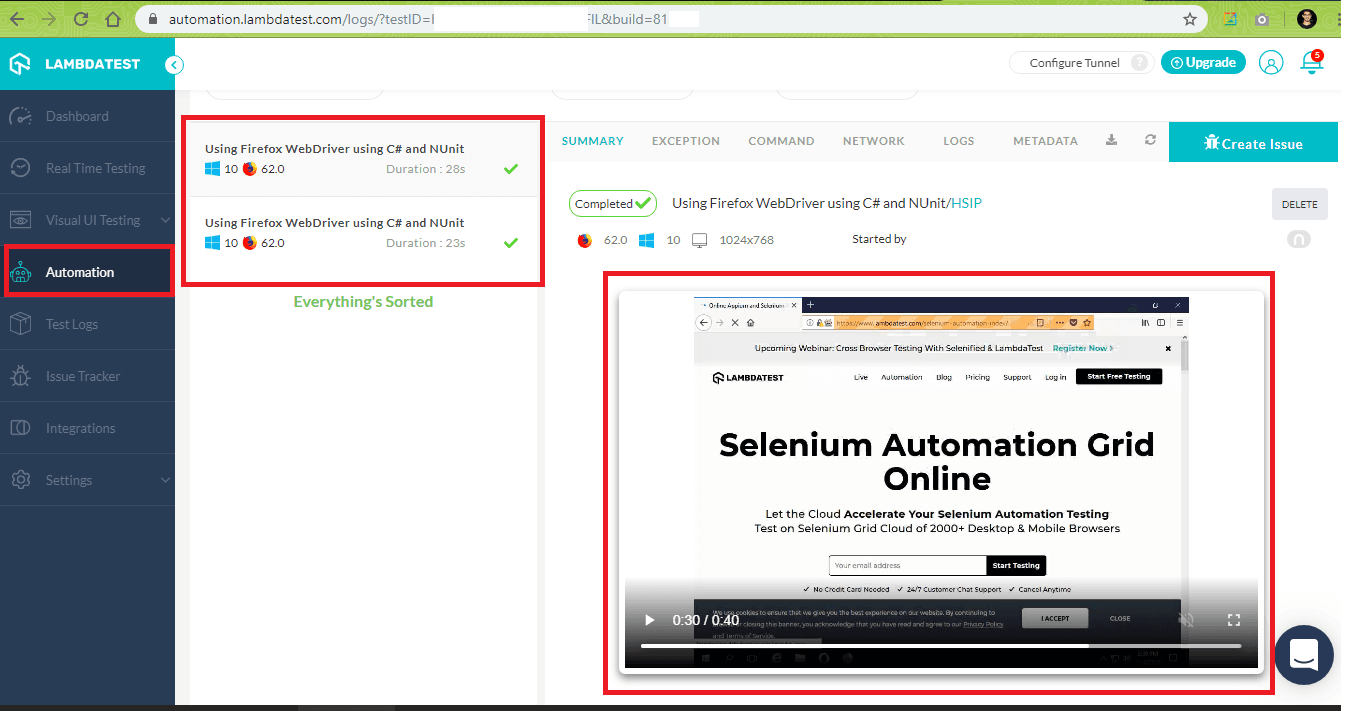 As seen in the above snapshot, the test status is Completed i.e. test has passed. You can even find the execution video that was recorded in real-time when the Selenium automation testing was performed.

Mozilla Firefox holds a dominant position in the browser wars. So developers need to keep cross browser development practices in mind. And testers need to incorporate Selenium Geckodriver or Selenium FirefoxDriver in their Selenium testing suites.

Maintaining an in-house Selenium Grid infrastructure can come back to haunt you later down the road. It would be best to port your existing Selenium test suites to an online Selenium Grid. Your existing Selenium testing setup can be easily ported to LambdaTest’s cloud Selenium Grid. with minimal changes in the implementation. This enables developers to test their code against not just Firefox versions but many more major browser vendors such as Google Chrome, Safari, Edge, Opera, Yandex, and even the notorious IE. Use LambdaTest Selenium rid now for free and improve the overall test coverage – an important KPI for every business running online. Happy Testing ☺