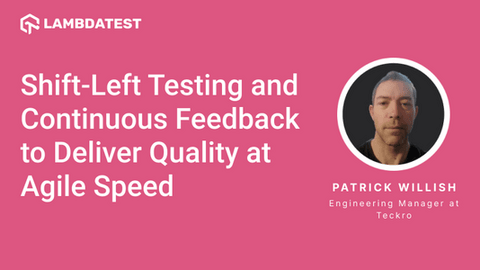 When it comes to enabling Agile software testing with automation, shift-left testing is the most talked-about term. In the earlier days, developers followed the “Waterfall Model,” where the testing stage came into play on the far right of the development cycle. As developers realized the need to test the software at early stages, the concept “shift-left testing” was born.

Shift-left is finding errors and defects at an early stage of the software development life cycle. The focus here is to improve the product’s quality with shift-left testing or shifting tasks to the left as early in the development cycle as possible. Shift-left testing has become an essential part of software testing and DevOps since it helps test the code more often and fix bugs earlier.

We’re sure that you would be having a lot of questions revolving around the Shift-left testing approach. But worry not! Our Product and Growth Manager, Harshit Paul, and our special guest, Patrick Walsh, Engineering Manager at Teckro, are here to talk about the infamous concept of shift-left testing and answer your questions! In case you missed the power-packed webinar, let us look at the major highlights of the event.

In this insightful webinar, our special guest Patrick Walsh, an experienced Shift-left Practitioner and Engineering Manager at Teckro, and host Harshit Paul, Product and Growth Manager at LambdaTest, get together to talk about how shift-left testing can help you move from manual to 70% automation testing with DevOps practices.

Since you got the Webinar overview, here’s the webinar video to acquaint yourself with the knowledge bombs that it holds!

Let’s dive into the world of shift-left testing with this webinar!

Here’s the agenda for the shift-left testing webinar: 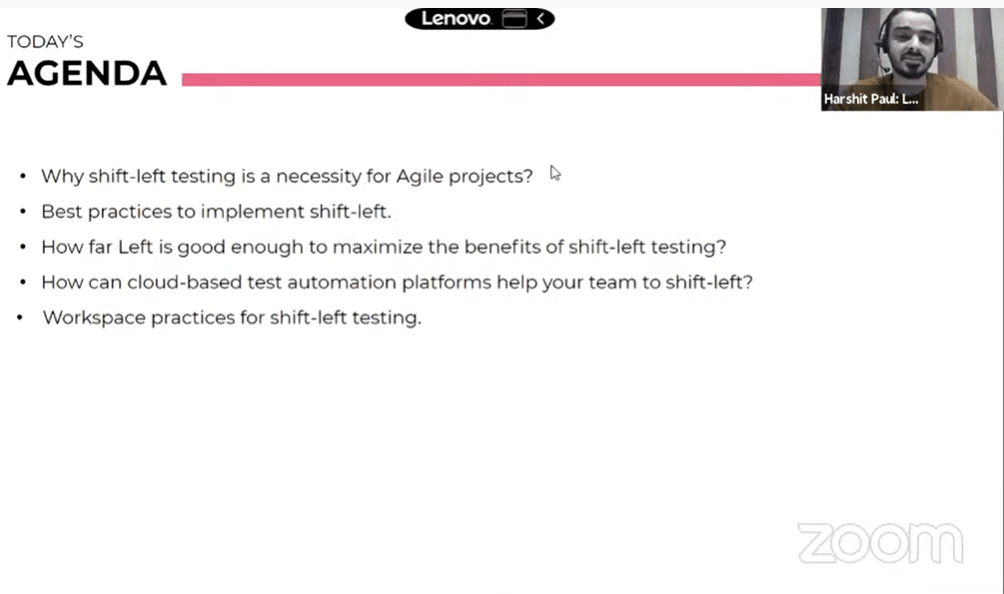 The webinar kicks off with Patrick explaining the importance of shift-left testing and how it came into the picture. He highlighted as people’s needs changed with time, it was important for the software to adapt to those needs too. And to catch up to the changing needs of the users, the software developers came up with an agile method of shipping the software.

In today’s time, we depend on real-time user feedback from real users in the real world to drive our development process compared to the earlier times where a lot of research, planning, and specifications were the go-to method for big software companies.

In addition, Patrick also explains the Testing Pyramid and its significance in the testing process. 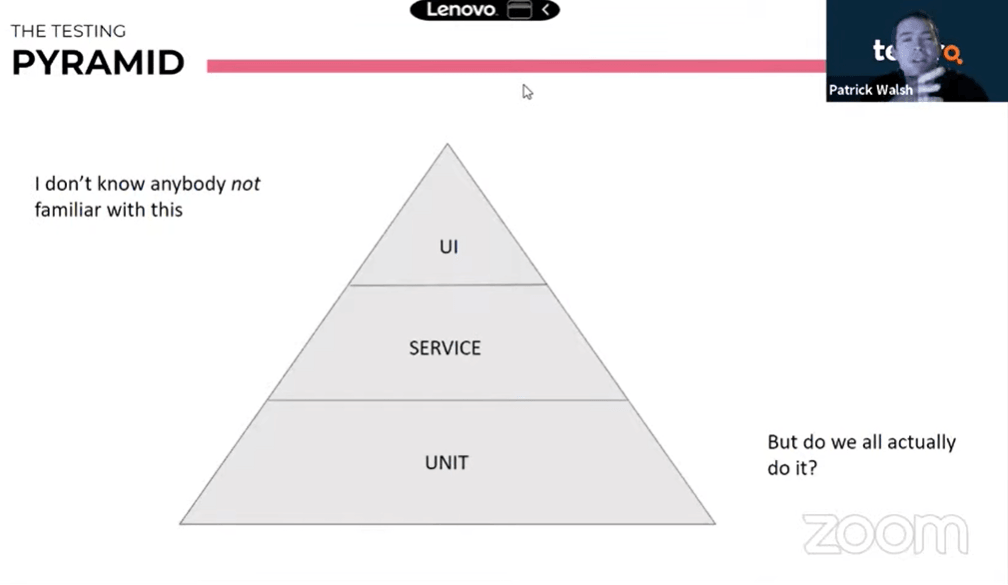 The webinar follows the theme of Shift Left = Test Early and Often. Patrick helps us to understand many strings that are attached to shift-left testing. The major ones are:

Along with this, Patrick also helps us understand both shift-right and shift-left methodology of testing and how shift-left testing and continuous feedback are essential for delivering high-quality agile projects.

Patrick goes on to explain the requirement of specific prerequisites for the adoption of the shift-left approach. 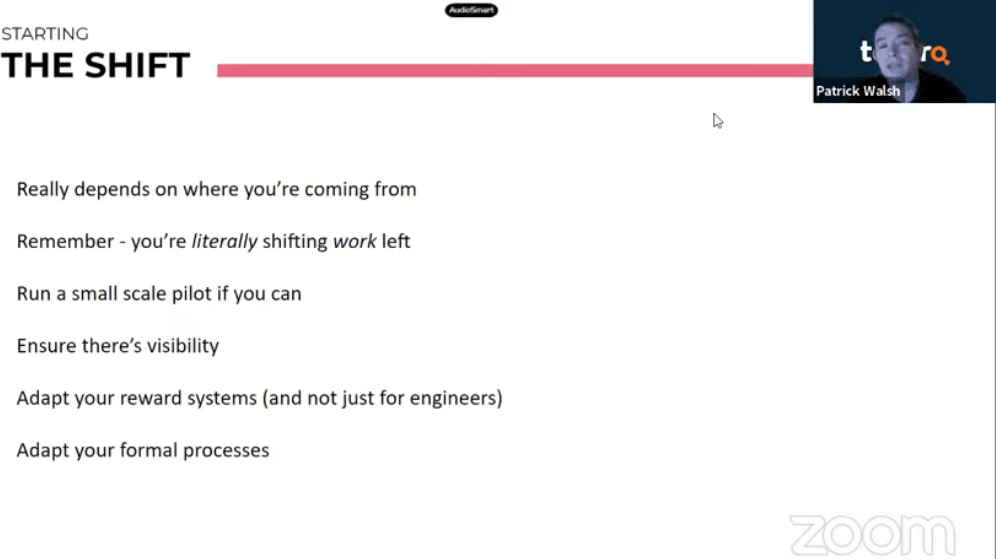 He further says that you need to understand your environment. Then, within that environment, you will find components such as integration points in the architecture that are easier to approach from the shift-left perspective and give access to other things like gateways.

He further advises running a small-scale pilot project to help you prove your approach and allow you to get your management on board with the approaches you’re describing.

Patrick talks about ensuring visibility in your projects. He further adds that people don’t talk about their technical successes and that it needs to come to light and that people should also raise their profiles within the organization they’re working for. He emphasizes ensuring visibility by demonstrating your results in a way that company stakeholders understand your perspective.

Another point he talks about is adapting reward systems in the company and not only for the engineers. For example, he believes that a system should reward engineers for writing quality code as people are rational and will do the things they will be rewarded for.

The shift-left concept has changed the way we think about testing. It has shifted our focus to thinking of testing as something that can be done collaboratively across the whole lifecycle — not just by testers at the end. And it has empowered teams to get involved in testing practices earlier than they used to, even if they aren’t yet experts. In the webinar, Patrick highlights a few best practices when it comes to the shift-left testing approach. 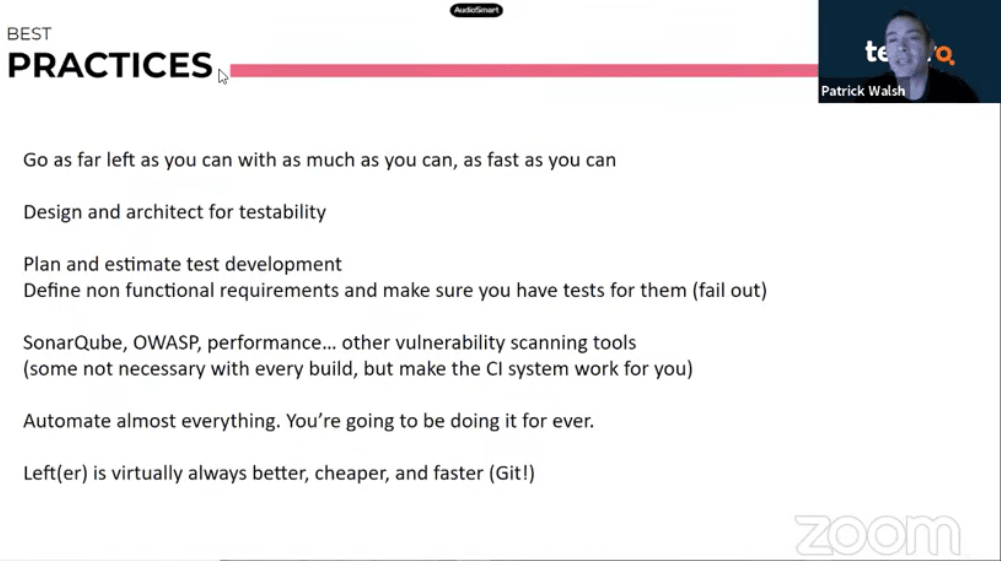 After gaining insights about the best practices that testers can follow, Harshit Paul takes us on a journey to use LambdaTest’s Cross Browser Testing platform and leverage its features to test more effortlessly.

In the second last segment of this insightful webinar, Harshit Paul introduces LambdaTest, the industry-leading test automation platform. He explains how Selenium testing tools like LambdaTest allow its users to automate Selenium testing across 2000+ browsers and operating systems. For Cypress testing, LambdaTest supports over 40+ browsers including the latest versions of Chrome, Firefox, Safari, Opera, IE, etc. In addition, he also discusses in-depth the third-party integrations which LambdaTest supports and how users can leverage the data available in the automation dashboard. 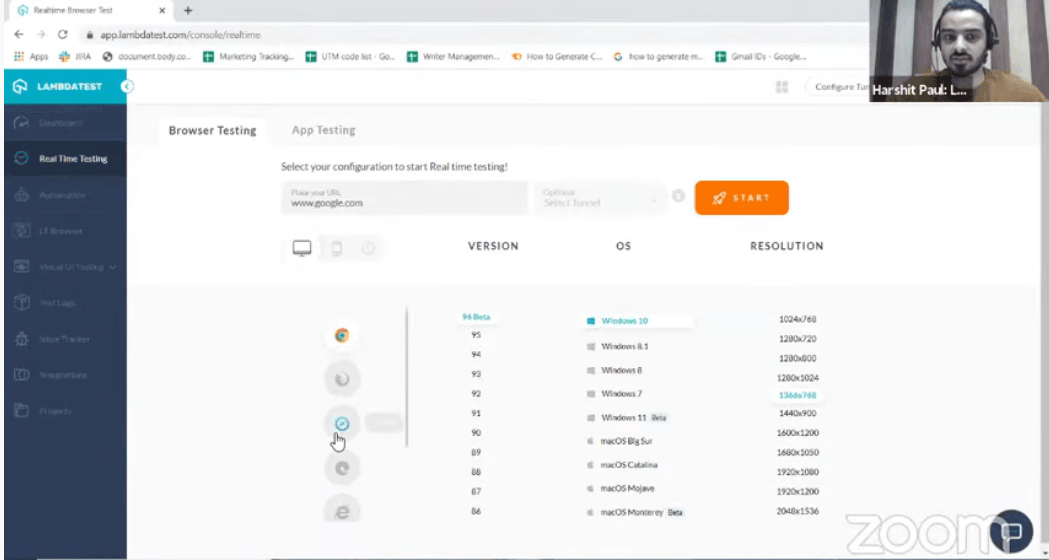 If you use Selenium or Cypress framework, we recommend checking out our go-to guide for both Selenium and Cypress test automation framework.

Before wrapping up, Patrick and Harshit answered a number of questions raised by the viewers. Here are some of the insightful questions:

Do you think automation testing can be the responsibility of the developers, or is it essential to have separate positions?

Patrick – I think it’s not essential to have separate positions because I’m not sure how many things I can be good at, at the same time. In most situations, having a different person also brings a different perspective to the problem. The context switch from writing the application code, integration tests, and swapping back again is a bit jarring for me. It raises the question that do you gain anything by amalgamating those two things together?

In general terms, it’s optimal to have different people doing those roles because it allows the people working on the integration tests in particular and other forms of test automation to specialize and focus on that and become experts very fast and produce high-quality test code. Whereas if you’re trying to write application code and the integration test code at the same time and think about things like performance, it’s pretty hard to be good at all of those things at the same time, and so I don’t think it’s essential to have separate people. Still, I think it’s overall a better situation.

Is there a video base where I can learn all the capabilities or functionalities of LambdaTest apart from browser them manually?

Harshit – So yes, Yogesh, as I mentioned at the beginning of the webinar, you can go through the LambdaTest YouTube channel where we keep uploading product demos and engineering videos along with videos around Selenium testing, Cypress testing, CI/CD, and more.

Any thoughts and best practices to encourage the traditional project to have a shift-left mindset?

Patrick – The implication in the question there is that they don’t currently have the shift-left mindset. Their lean and shift-left approach has been going on for about 20+ years. So if they haven’t noticed at this point, they need some trigger or encouragement to see. I would highly recommend your management attend something like the certified scrum master training where they could typically cover the history. Suppose you can get them to do that. In that case, the training will cover things like the Toyota Production System and those courses, how those approaches apply to software development and the advantages. If they haven’t stepped onto this path already, this might take a lot of persuading, and they might be more open to an external expert voice in the field of an area that’s growing.

So I think one of the most valuable things I would try to do is get them to sign up for the certified scrum master course if they haven’t done it already. Especially if that’s your management; those guys will help them open their eyes if you haven’t persuaded them to get somebody else to do the push. Or you can buy them Eric Reese’s book, The Lean Startup, and make them read it.

Can we showcase Selenium, how it behaves and how to start automating with it?

Harshit – The focus of this webinar, in particular, is not to deep dive into the code side of things on Selenium. Still, we’ve had previous webinars conducted where we have started developing Selenium scripts from scratch. We also have tutorials available on the channel to look at them and see how it works out for you. If you get stuck at any point, let us know; we’ll be happy to help. You can go through the LambdaTest webinar page to see all the existing webinars.

However, if you are new to Selenium automation testing, we recommend you to check our detailed tutorial on what is Selenium?

How do we import our automation tests into LambdaTest?

Harshit – It’s a simple process. Once you have your automation scripts with you, you need to make three changes to your code line:

Once you have them authenticated, you will need to define capabilities, as we highlighted early on through the LambdaTest Desired Capability Generator. Then, you can go ahead and get that class and incorporate that capabilities class in your code set. When you’ll run that, that is all you need to do to plug your test on LambdaTest irrespective of which framework you’re using.

We have the capability generator developed for you to make the process easier and handier. You can find it across different languages irrespective of which language you use or which Selenium version you’re using. Even if it’s the latest version, Selenium 4, we’ve got you covered. And, of course, as I said, we have 24/7 chat support, so you can reach out to us at any point in case you are struggling to run your first automation test. We’ll be happy to help you with that. Here’s the video, in case you are curious to know what is new in Selenium 4?

Harshit – Yes, it does. As I mentioned, this is a Cypress test here, as you can see, and we’ve run it across two different browsers as I was talking about parallel testing. So you can leverage the same test and run it across different browsers at the same time. So even if it’s an error, you can go ahead and see if something is running there or not. But, again, this is entirely a Cypress test over here that you can see, so you’ll find that segregation on the timeline and Cypress tests are highlighted with the Cypress logo.

Harshit – Yes, so as of now, we do have Appium Mobile Web Automation Grid capabilities that you can leverage to test your mobile website. But mobile application automation is still being worked upon, and it’ll be onboard very soon.

We hope you liked the webinar. In case you missed it, please find the recording of the Webinar above. Make sure to share this article with anyone who wants to learn more about shift-left testing. Stay tuned for more exciting webinars. You can also subscribe to our newsletter Coding Jag to stay on top of everything testing and more! 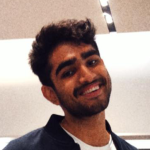 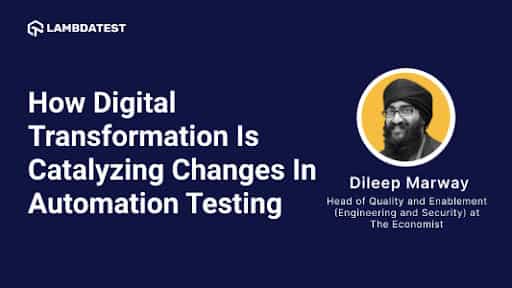 How Digital Transformation Is Catalyzing Changes In Automation Testing 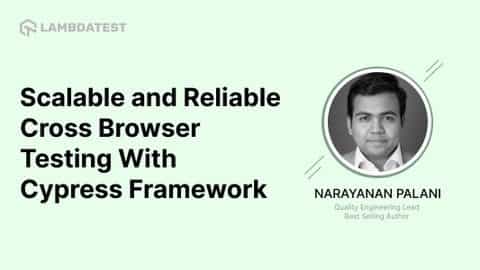 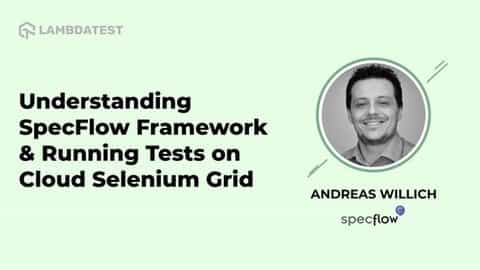 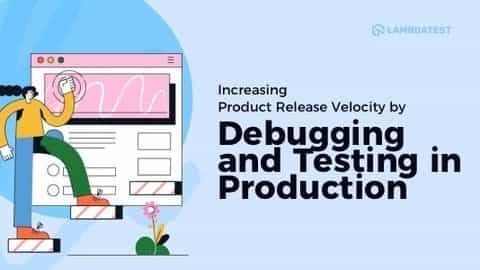 Increasing Product Release Velocity by Debugging and Testing In Production