How To Perform Cypress Testing At Scale With LambdaTest

Web products of top-notch quality can only be realized when the emphasis is laid on every aspect of the product. This is where web automation testing plays a major role in testing the features of the product inside-out. A majority of the web testing community (including myself) have been using the Selenium test automation framework for realizing different forms of web testing (e.g., cross browser testing, functional testing, etc.).

Selenium now has a worthy competition from Cypress, an open-source JavaScript-based test automation framework that can be used for E2E (End-To-End) testing of web applications. Though Cypress has a powerful feature set, the true potential of Cypress testing can only be exploited by running tests on a scalable and reliable cloud grid. Are you planning to perform cross browser testing with Cypress at scale by avoiding endless investments in building an ageing in-house testing infrastructure?

In this blog, we cover essential aspects of Cypress testing from scalability, reliability, and maintainability points of view. We will deep dive into the usage of the Cypress UI testing framework with the LambdaTest Cypress CLI [i.e., lambdatest-cypress-cli ] for running Cypress tests at scale on the LambdaTest Grid.

What is Cypress Automated Testing?

Cypress is a fast-evolving front-end testing framework that is primarily built for testing modern web applications. Cypress lets you create unit tests, integration tests, and unit tests that can be further run inside the web browser.

The major upside of Cypress is that it is built using JavaScript – the most popular language used for front-end web development. This is the primary reason it is touted as the ‘go-to’ framework for testing modern web applications. It supports the Mocha JS framework and uses the Chai library for writing friendly and readable assertion messages.

Implementation of a unique DOM manipulation technique and tests that run inside the web browser are the two advantages of Cypress compared to other test automation frameworks like Selenium. Do check out our detailed blog on Selenium vs. Cypress comparison – a comparison guide that touches upon the nitty-gritty of both the test automation frameworks.

The Cypress project is hosted on GitHub; here are some of the key essentials of this open-source project:

As of writing this blog, the latest version of Cypress is 7.6.0. The statistics that demonstrate the six-month download rate of Cypress show a lot about its growing popularity.

It combines the best of both worlds – capabilities of Cypress testing framework and reliability & scalability of the LambdaTest Grid.

Before we deep dive into the essential aspects of the CLI (Command-Line Interface) of LambdaTest Cypress, let’s do a quick recap of the major advantages of the Cypress framework:

Why Use LambdaTest Cypress CLI?

Here are some of the major reasons to choose LambdaTest Cypress CLI over the Cypress test automation framework:

The Cypress testing framework does let you run tests in parallel by grouping tests by browsers, test labels, and more. However, achieving optimal browser coverage is impossible with a local Grid infrastructure since you need to upgrade the test infrastructure continually.

Optimal browser coverage, super-fast test execution, and parallel execution at scale with Cypress testing can be achieved by running tests on a reliable & scalable cloud grid.

Cypress test automation on the LambdaTest grid comes with detailed test logs, screencast (or video grabs of performed tests), and more. These are valuable resources for debugging issues in the existing tests.

To summarize, cross browser testing with Cypress testing framework can be performed at scale with the secure, scalable, and reliable LambdaTest cloud grid.

At the time of writing this blog, the latest version of LambdaTest Cypress CLI (or lambdatest-cypress-cli) is 2.0.5.

To run the Cypress test suite on the LambdaTest cloud grid is super easy and only requires the installation of the CLI. Perform the following steps to install and run LambdaTest Cypress CLI on your machine:

On successful execution of the above command, lambdatest-cypress-cli will be installed on your machine.

Now that lambdatest-cypress-cli is installed on the machine. It’s time to set up the configuration for Cypress testing. Since the Cypress tests are run on the LambdaTest Grid, we save the LambdaTest username and access key to the environment variables – LT_USERNAME and LT_ACCESS_KEY.

If you do not have the package.json file in the project folder, run the command npm init on the terminal. You can press ‘Enter’ for all the entries mentioned for the JSON file. 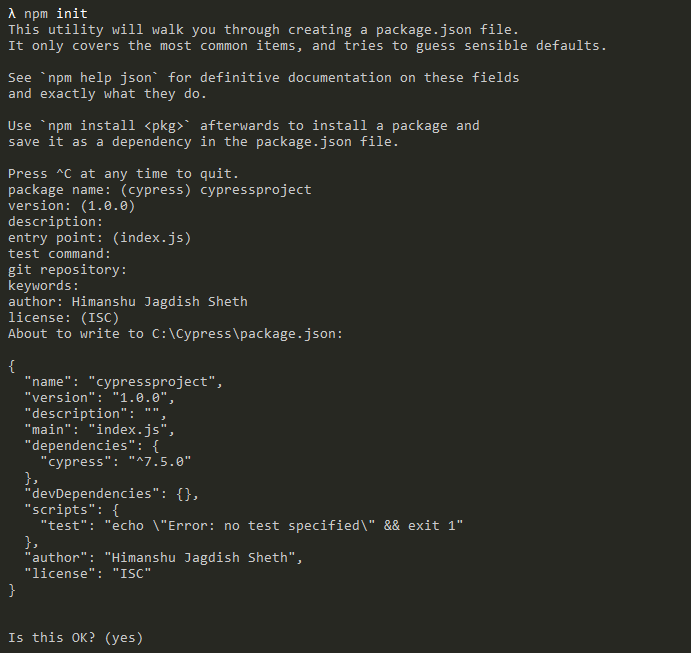 Upon successful execution, you should have package.json in the project folder.

The next step is setting up the LambdaTest Cypress configuration. Run the command lambdatest-cypress init to set up the configuration.

Upon successful execution, you should have lambdatest-config.json in the project folder.

LambdaTest credentials to perform Cypress testing on the LambdaTest Grid. You can leave the fields as default if you have already declared the environment variables for LT_USERNAME and LT_ACCESS_KEY.

This section contains the details of the browser, platform, and version on which Cypress test automation has to be performed. You can have umpteen browser & OS combinations in an array.

This section contains the desired capabilities of the Cypress test suite. cypress_config_file points to the cypress JSON file ( e.g., cypress.json ), which was created in the earlier step.

Read – How To Use UnderPass For Testing Locally Hosted Pages

The below video will help you with the ways through which you can perform localhost testing using the LambdaTest Tunnel:

How To Perform Cypress Testing With LambdaTest Cypress CLI

Now that we have the requisite configuration for performing Cypress testing on the LambdaTest Grid, it’s time to get our hands dirty with some code. We will use the LambdaTest ToDo app instead of the LambdaTest’s sample Cypress Kitchen Sink example for simplicity.

Here is the overall test scenario which will run on Chrome and Firefox browsers on Windows 10:

Step 1: Cypress API cy.visit() is used for opening the target URL (or URL under test).

Step 2: A wait of 5000 ms (or 5 seconds) is added to ensure that all the WebElements are present in the DOM.

Step 3: The cy.get() API is used for locating the first item in the ToDo list. A click operation is performed on the recently located WebElement (i.e., li1).

Step 4: Locate the second item (i.e., li2) in the ToDo list and perform a click operation on the same. 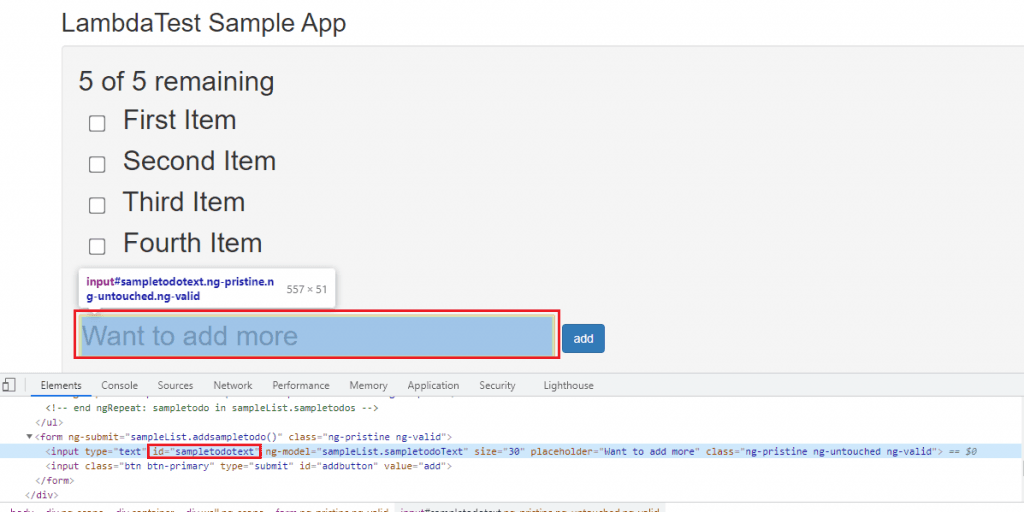 Step 6: Locate the ‘Add Button’ using the cy.get() API and perform a click operation to add the newly added item to the ToDo list.

Step 7: The cy.contains() API used to get the DOM element containing the text ‘Happy Testing at LambdaTest.’ You should get the log stating ‘ToDo App passed’ if a new item is added to the ToDo list.

LambdaTest Cypress Configuration (JSON) – Cypress testing has to be performed in parallel across Chrome and Firefox browsers (on Windows 10). Hence, we set the relevant browser & platform details in the browsers entry.

Here is the complete LambdaTest Cypress configuration file where we have used LambdaTest username and access key from the environment variables.

Here is the overall folder structure, which contains the following entries:

Once the command is triggered on the terminal, you will see the corresponding tests uploaded to the LambdaTest Grid. 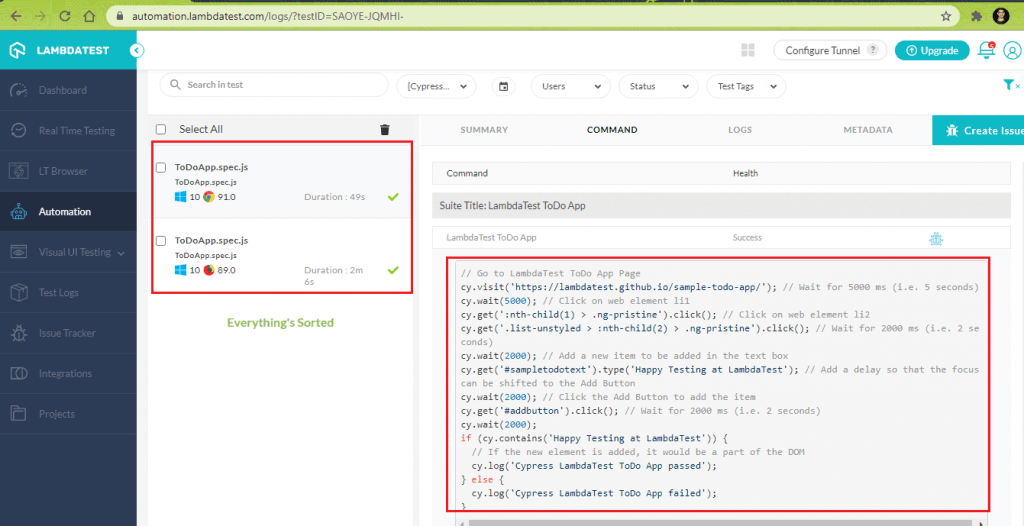 The execution snapshot from the LambdaTest Automation dashboard shows that both the tests were executed successfully.

To explore the options offered by the run command in LambdaTest Cypress CLI, run the following command on the terminal:

Here is the gist of the various options provided by the run command: 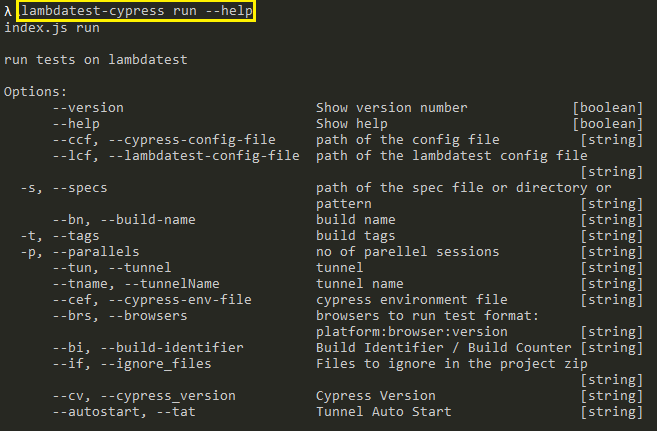 Here the major options through which you can override the settings mentioned in the LambdaTest Cypress configuration file:

We performed Cypress test automation on the LambdaTest grid against two browser and platform combinations in the previous example. Let’s override those options and perform cross browser testing with Cypress against the following combinations:

To get details of the platform name, browser, and browser version, we used the LambdaTest Capabilities Generator. This task is only performed to ensure that the platform and browser names are in line with what is expected on the LambdaTest Grid. Entries for browser and platform combinations are comma-separated so that the Cypress test considers all the required test combinations.

Run the following command on the terminal to run Cypress tests on the desired combinations:

Here is the execution snapshot, which indicates that the test was uploaded successfully:

The snapshot below from LambdaTest Automation Dashboard indicates that the two tests were triggered in parallel. The Build name is also overridden by the details specified in the CLI options.

As seen below, Cypress testing on the desired browser and platform combinations passed on the terminal was completed successfully.

Cypress testing is giving stiff competition to test automation since Cypress is a well-designed framework best suited for testing modern web applications. However, the potential of the Cypress testing framework can be further enhanced by using it against a reliable and scalable cloud-based automation grid.

Cypress test automation is on the rise, and it’s best for developers and enterprises to leverage the potential of the Cypress testing framework with the LambdaTest cloud grid. In further editions of the Cypress tutorial, we would deep into the essential aspects of cross browser testing with Cypress at scale! 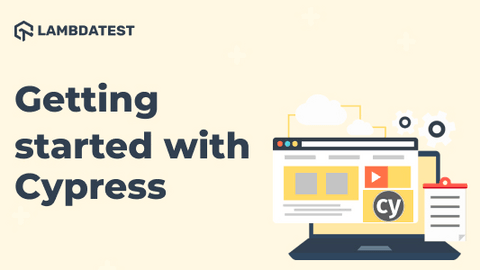