Organizations must adopt Agile & DevOps Continuous Integration and Continuous Deployment (CI/CD) approaches to achieve faster releases and top-notch software. For this, they can use various Test tools currently available to build products that are unmatched in the market.

Are you the one who is still confused regarding which Test tool to pick?

This tutorial will give detailed information about the Test tools, why you should use them, their benefits, and much more!

What is a Test tool?

A Test tool is a product that supports one or more test activities, including test planning, requirements gathering, building, running tests, logging defects, and test analysis. Using test management or a Computer Aided Software Engineering (CASE) tool, you can identify the input fields, including the range of valid values.

The Test tool will identify all the fields and assist you in getting started with the test design, but it won't complete the task for you as more verification may be required. A test coverage tool could also come with another test design tool. For instance, a coverage tool can determine the route to cover the untested branches if a set of current tests has already decided which components have been covered.

Why should you consider using a Test tool?

Organizations may ensure that the software application they produce complies with specifications and requirements, offers a superior user experience, and is mainly free of flaws and errors by using efficient software testing techniques.

Software testing tools are advantageous for QA teams, testers, and developers. It makes tests more accurate, increases the amount of tested code, speeds up testing cycles, and provides early feedback to developers, all of which contribute to the delivery of applications of higher quality.

Where does the Test tool fit in the Software development life cycle?

QA engineers adhere to well-established software testing life cycle phases to ensure the application functions as planned. The flowchart below will help you understand where the Test tool fits in the software development life cycle. 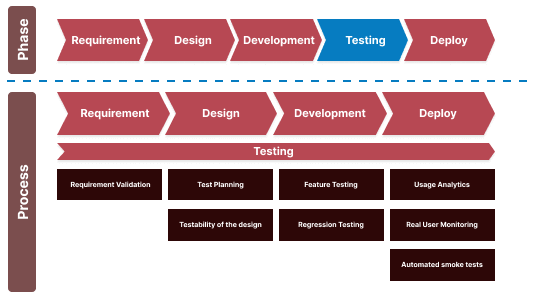 Tools for managing various functional and non-functional tests are available in the market. These tests check whether an application has all the features and requirements outlined in the project requirements. The non-functional testing assesses the software's performance, usability, dependability, security, and other elements to identify how well the software runs and what kind of user experience it provides.

Take a glance below to understand which type of Test tool can cover which module during the testing process.

Consequently, assuming you've followed along, we may conclude to implement a Test tool successfully. It makes more sense to use it first for automating advanced test cases before you finish the regression ones.

However, there are two queries now surface:

When to start working on progression?

When a new test automation project launches, the investment is more than the return. It would probably take longer to implement the functionality of the user narrative than it would build all the infrastructure required to make the initial tests function.

Therefore, experts advise starting with test suites that confirm the system's fundamental functionality and key features. You can construct and stabilize the infrastructure of the application's key features with the aid of this suite.

Moreover, this is the moment for you to incorporate the automated tests into the CI tools and development procedures. Make sure that all tests pass as you create the suite. Adjust your tests and infrastructure as necessary to accommodate changes to the product.

If a test fails due to an application bug, try to fix it as soon as you can rather than just opening a bug report. Additionally, ensure that the tests execute well on all devices because you'll want to give developers the option to perform the tests on their devices shortly. It would be best if you worked to keep your tests simple to manage and ensure that failures are simple to identify.

Prioritizing the work to fill the regression gap

Your primary focus should be on the things that add the most value to the company and the customers. The product's ROI is directly affected by locating and eliminating defects in these features.

How to use a Test tool?

Are you confused about what Test tool you need to become familiar with? Despite the market's abundance of automation testing solutions, the one you pick should be capable of streamlining your responsibilities and providing you with the necessary break.

Generally, we use the Test tool to test websites or mobile applications. However, on-premise testing has several significant challenges like infrastructure, costs, maintenance, scalability, etc. To eliminate the pain point of on-premise testing, a viable solution is to leverage cloud-based Test tools like LambdaTest.

Serving 1M+ users across 132 countries, LambdaTest is considered one of the fastest cloud-based testing platforms for automated and exploratory testing across 3000+ real browsers, devices, and operating systems. It has a simple onboarding process, making your web and app testing painless. LambdaTest supports the best test automation frameworks like Selenium, Cypress, Playwright, Puppeteer, Appium, Espresso, and XCUITest.

You can subscribe to the LambdaTest YouTube Channel and stay updated with the latest tutorials around Selenium testing, Cypress testing, End-to-end testing, and more.

The following features distinguish LambdaTest from the crowd -

Improving the efficiency of the Test tool

After going through the Test tool in detail, let’s explore how to increase the efficiency of the Test tool. There are several methods of doing the same, and a few of them are discussed below.

This method ensures that testers and automation developers are involved as early as possible, allowing them to significantly impact the product's quality. Furthermore, using the procedure from the start of the project indicates that the tests cover all of the defined functionality.

Approaches for the Upgrade test

When asked what customers hope to gain from test automation, the most typical response is a reduced time to test the software before it is made available.

On the one hand, while this is a significant objective, test automation can help you with a lot more things than just this. It typically takes quite a while to reduce the number of manual test cycles. On the other hand, you might observe the other advantages earlier.

Hope by now you have got a good gist of the Test tool for software testing. You can choose the best one that suits your business needs the most.

What is the testing tool?

A testing tool is a product that supports one or more test activities, including test planning, requirements gathering, building, running tests, logging defects, and test analysis.

What is the most used testing tool?