The Definitive Guide To Automation Testing For IT Teams 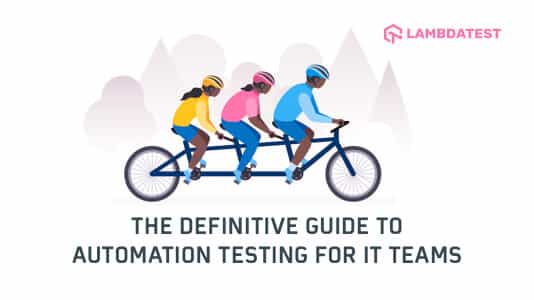 According to The Newstack, software testing consumes, on average, 30-40% of an organization’s application budget. If you’re involved in the software development process, then you will understand the importance of testing. If flaws are caught in the early stages, it costs less – both in terms of money and time – to fix.

As software development projects continue to scale, they tend to be more complex, with the project development cycle getting faster, keeping up with the pace by relying on manual testing can be challenging, that is why more and more companies chose to go for automated testing. This allows them to meet testing objectives within a reasonable timeframe. But what is an automation testing exactly, and why is it important in the first place? This is what we’ll discuss in this guide.

What Are The Benefits of Automation Testing?

The main aim of performing test automation is to reduce the cost and time needed to build a product while ensuring it is built to a high standard. 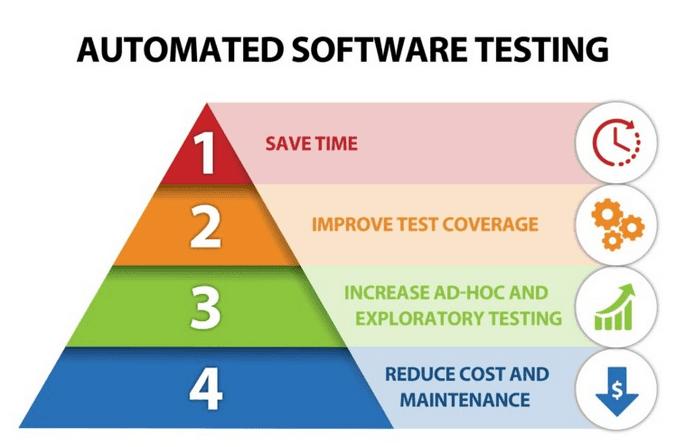 With automation testing, the automation tools and actions are added to the software development flow. This is both faster and allows for wider coverage. If testing is automated, the same test is conducted every time, meaning more errors can be eliminated faster. automation testing also allows for better reporting. Ultimately, it saves time and money on the whole process.

If the results of the automation testing are acceptable, the software is deployed. If they are not, the software is returned to the developers, who make the necessary adjustments. Let’s say there is a web application that works perfectly on chrome browser, but those elements show outage when the website is open in older chrome versions. You can utilize Selenium test automation to identify all the browsers and their legacy version, on the basis of this you can rework on your code, and you’d be good to go.

Should I Completely Replace Manual Testing With Automation Testing?

Let’s look at another example. Say you’re working on a web application, and one of the features that you want to test returns data based on users’ inputs such as values being shown on the dashboard based on their activity. You can determine if a metric is calculated correctly with automation testing. What you can’t determine, though, is whether or not the dashboard is visually appealing and intuitive for a human user. You’d need the eye for detail of a QA tester for that. So manual testing is still required whenever a finesse of a human mind is required to test the web application.

We must also remember that automation testing is not automatic. Developers still create the test scripts and workflows after they determine the set of criteria that is needed. These tests can potentially be reused, but only for software that shares the same criteria and requirements.
Automation testing and manual testing both have their strengths. The key is to determine which aspects of each work best for your software, and use them accordingly.

Automation testing does not refer to a single test. There are multiple test types you can use to check the performance, security and other aspects of a software. Here’s an overview of the most common types of tests:

These ensure that existing code or modules continue to operate as expected, even with the addition of new code. After each build, regression testing is typically repeated.

Also called build-verification tests, smoke tests are used to check whether the most important features or functions of an application operate as expected. The application is sent back to developers for adjustments if it fails the smoke test.

These tests make sure that your web application performs well on different browsers. Since different browsers have different browser engines, there might be some discrepancies between them as certain browsers might not support some elements. This is why organizations perform cross browser testing in every release cycle. Thanks to open-source test automation frameworks such as Selenium who have made it easier to automate browser testing saving web-testers a significant amount of time and effort. Using Selenium test automation testers are able to ensure that the website renders perfectly on all browsers, browser versions, and operating systems.

Apart from testing on different browsers you also need to ensure that your website works on different mobile devices as well. Since every mobile device has a different view port you need to make sure that the content on your website is responsive and adjusts appropriately on different mobile view ports. Now, your automation testing scripts can’t judge if the content is being rendered as per the design. However, using an open-source test automation framework such as Selenium, you can collect full-page screenshots of your website across different screen resolutions and can later compare them easily yourself. At LambdaTest, we’ve responsive testing along with smart testing to help you do the task easily. Our Smart testing feature can help you compare multiple images from an anchor image on a pixel-to-pixel comparison view.

The UI tests represent the front end of the application. It is the most difficult part of a product to test because user input can vary so widely. Although the UI can be as simple as a command-line interface, the possible button-press sequences or command-line variations for UI testing can be high.

This is connected to UI testing, and checks if an application correctly transforms the input data into output data. For example, you can use a sample data set to check whether an application is intended to perform calculations and derive an output function in the way it should.

These assess individual units of a software platform. A unit is the smallest testable part of any software, and usually has one or a very few inputs. It also typically derives a single output.

API testing helps validate the interaction of requests and responses in the application programming interfaces. These can involve various endpoints, including databases, mainframes, UIs, and web services.

In Integration tests, all the units are merged and all the units are tested together. These tests are done to ensure that there are no bugs when the different units interact with each other and the application works as intended.

These are tests that ensure a project is finished. They can be difficult to automate, so they are usually reserved for the end part of a project’s development cycle.

These assess an application’s performance when under stress. The results of these tests are the basis for adding limits or warnings to prevent unexpected problems.

In Monkey testing, the main idea is to see if the web application will crash when you provide random inputs. You can refer to our article on automated monkey testing to get into more detail on the topic.

You may opt to use one or more of these tests in a layered fashion or rapid succession when testing software. The approach that makes sense depends on the issues of the application that need to be checked. This is where an IT team might ask itself which tests should be automated and which should not.

The main aim of performing test automation is to reduce the cost and time needed to build a product while ensuring it is built to a high standard. In deciding which tests to automate, organizations should be mindful of which approach will yield the highest return on investment.
Mike Cohen’s Agile Test Automation Pyramid can help build a good strategy for implementing automation testing: 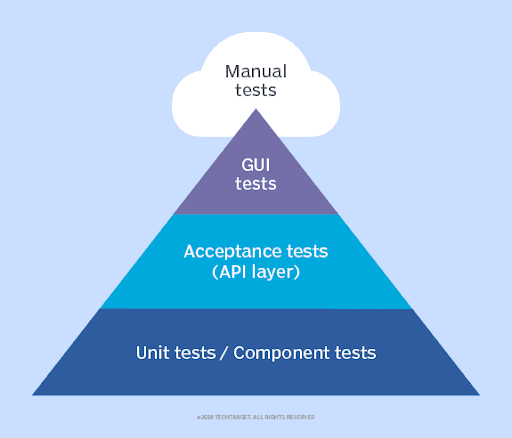 With Agile testing, though – as illustrated in the pyramid above – you have a more solid foundation, as the bulk of testing is done with automated tests at the unit level. The higher you go up the pyramid, the fewer tests you should have to run.

The agile testing system teaches us that a test suite should consist of writing many small and fast unit tests. Also, a few tests with a high-level focus in order to perform end to end testing of your web application. By doing agile testing, rather than looking for the bugs, you actually prevent the bugs to occur!

How Agile Teams Use The Test Automation Pyramid?

It’s not enough to determine when to automate and when not to. For a good automation strategy, It is equally important to determine the guidelines, reporting, processes, and workflows involved in the test execution environment. Your test automation framework matters.

Apart from defining your available resources, way of reporting, and the tools and languages involved in the creation of tests, your test automation framework should optimize these tests so that there is minimal need for human intervention.

Your test automation framework aims to help developers and testers to work more efficiently. You want an optimized system that allows them to create, execute, and report with ease at every stage of the project.

Selenium offers a lot of automation testing frameworks, on almost all the major programming languages, you can use them on the basis of your requirements and teams understanding for Selenium Test Automation. You can refer to our blogs to find the top Selenium test automation framework.:

Choosing your automation tools requires careful thought to ensure efficiency and effectiveness. You should first check which tools test for the particular problems relevant to your product from the many tools available. Some tools test for a specific problem, while others are promoted as all-in-one solutions. Using one tool to address multiple issues is of course, more efficient, but only if it does so thoroughly.

Your automation testing tool should also fit the existing development framework of your OSes. Furthermore, it should integrate with other tools along the software development workflow. Ideally, it will also support developer-native programming languages for test automation such as Python or Java.

The field of automation testing is very much an evolving space. The use of artificial intelligence and increasingly sophisticated machine learning algorithms will continue to develop, allowing tools to focus on areas that are most relevant to software testing in the future and freeing up developers to increase their work elsewhere. The growth in AI will also allow for more and more processes to be automated in the future. 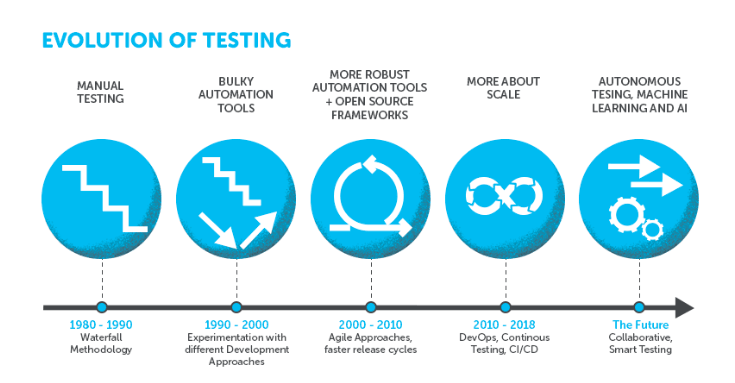 These technologies – RPA, AI, low-code programming, and even test automation itself – are all still in the relatively initial stages of growth. With technology advancing at an unprecedented rate, it is hard to predict where they will take the future of software development. And it is these endless possibilities that make the field of software automation testing all the more exciting.

Also Read: Top Automation Testing Trends To Look Out In 2020

In this article, I explored the importance of automation testing and while it is on the rise and plays a vital role in cutting downtime and costs, it can never replace the intricacies of manual testing. This is why it is important to realize what to automate and what not to as explored in the strategy to perform the automation section. One of the important points to note while performing Selenium test automation is to note that it supports many programming languages along with numerous frameworks, making it easy to adopt different frameworks based on team skillset and ease of use.

That was all for now! Do let me know your views on this article in the comments section down below. Feel free to retweet this article and help us reach out to your friends and peers.

Owen Jones is the Senior Content Marketer at Zoomshift, an online schedule maker app. He is an experienced SaaS marketer, specializing in content marketing, CRO, and FB advertising. 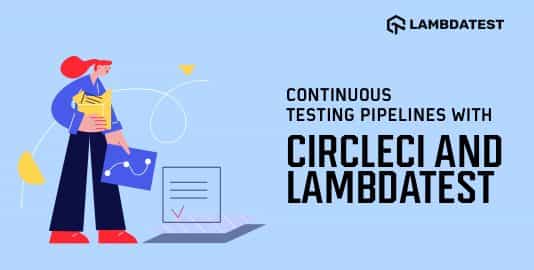 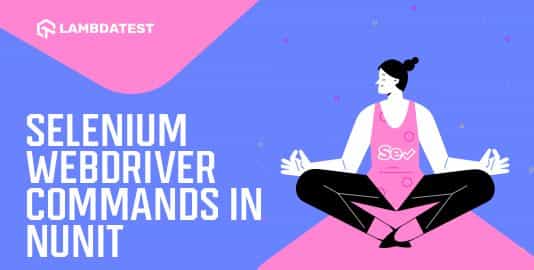 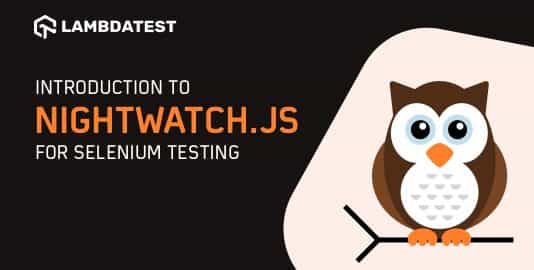