Code coverage is a software quality metric commonly used during the development process that lets you determine the degree of code that has been tested (or executed). To achieve optimal code coverage, it is essential that the test implementation (or test suites) tests a majority percent of the implemented code.

There are a number of code coverage tools for languages like Java, C#, JavaScript, etc. Using the best-suited code coverage tool is important to understand the percentage of code tested and take appropriate actions to ensure that you achieve the ideal code coverage!

For optimal code testing, many companies use the JaCoCo-Maven plugin that helps generate detailed code coverage reports. JaCoCo-Maven plugin is a free code coverage library for Java projects. It is based on the study of existing integration libraries that were created by the EclEmma team. At a larger extent, code coverage does give a brief overview of the product quality as higher the coverage, lesser are the chances of untested code getting into the release cycle.

In this blog, we will learn more about the JaCoCo-Maven plugin and how this plugin is implemented using Maven. We will also integrate a Maven project and generate detailed code coverage report for the tests by performing Selenium.

What is Code Coverage?

In software development, Code Coverage is a measure used to describe the degree to which the source code of an application is executed when a test suite is executed. A report is generated to view and analyze the code coverage of a software application. This code coverage report could then be used for ensuring code quality.

The JaCoCo-Maven plugin is used to generate code coverage reports. Source code with high code coverage has more of its code executed during testing. For example, if the software you are testing contains 100 lines of code and the number of code lines validated in the software is 90, then the code coverage percentage of that software application will be 90%.

Code coverage is a very useful metric for developers, testers, and QA engineers. Here are some of the salient benefits of code coverage:

As we know, code coverage is very important for every software product. However, if you are a developer or a tester, you can cure your interest in code coverage via the article: Code Coverage vs. Test Coverage, which one is better?

It also integrates smoothly with CI/CD tools (e.g. Jenkins, Circle CI, etc.) and project management tools (e.g. SonarQube, etc.). It is a part of the Eclipse Foundation and has replaced the EclEmma code coverage tool in Eclipse.

How does JaCoCo-Maven Plugin work? 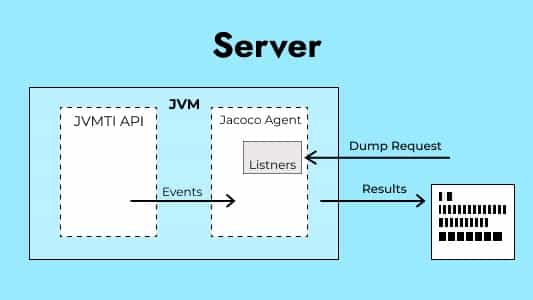 Read – Getting Started With Maven for Selenium

Why is Jacoco Maven Plugin good for code coverage?

The JaCoCo-Maven plugin is appropriate for code coverage because of the following reasons:

How to set up JaCoCo Plugin with Maven?

To get code coverage reports in a Maven project, we first need to set up the JaCoCo Maven plugin for that project. By integrating the JaCoCo plugin, the results of the code coverage analysis can be reviewed as an HTML report. The current version of the JaCoCo-Maven plugin can be downloaded from the MVN Repository.

Here are the steps to integrate JaCoCo Maven plugin with a Maven project:

1. Every Maven project has a pom.xml file, used to declare all the dependencies and plugins. The JaCoCo-Maven plugin is declared in the same POM.xml file. The XML code for the same is :

This is the basic XML code added under the build tag for specifying the JaCoCo plugin in a Maven-based project. We can enhance the functionality (like mentioning when a report should be generated, etc.) by specifying goals and rules in the execution tag.

2. After the version tag, we add the execution tag. This tag prepares the properties or execution to point to the JaCoCo agent and is passed as a VM (in this case, JVM) argument.

3. For running simple unit tests, two goals set in execution tags will work fine. The bare minimum is to set up a prepare-agent and report goals.

4. For running simple unit tests, the above configuration works fine. However, we would need constraints to be put on the code coverage reports (e.g. specify the destination directory, etc). This can be done via a configuration tag.

As per the above code, you can see some tags like destFile, etc., are specified. Here is a brief description of the tags:

As per the above code, you can see tags like dataFile, etc., are specified. Here is a brief description of the tags:

5. We can also add rules to our configuration tag to keep a check on the code coverage percentage. This can be done as shown below:

Here, a new goal check is defined. The jacoco:check goal is bound to verify the rule specified. Rule is given in the rule tag. You have the flexibility to specify more than one rule.

6. There are multiple goals and rules which can be defined in the JaCoCo-Maven plugin configuration.

In this section, we would demonstrate the steps to generate code coverage report using the JaCoCo Maven plugin. The demonstration is done by taking a very simple test scenario. So, let’s get started. 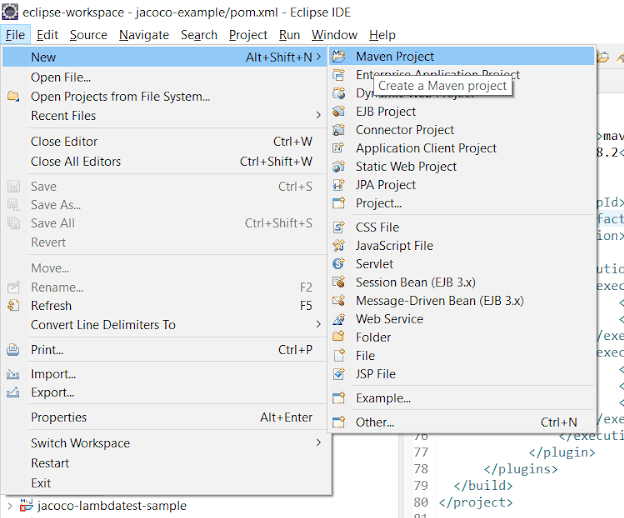 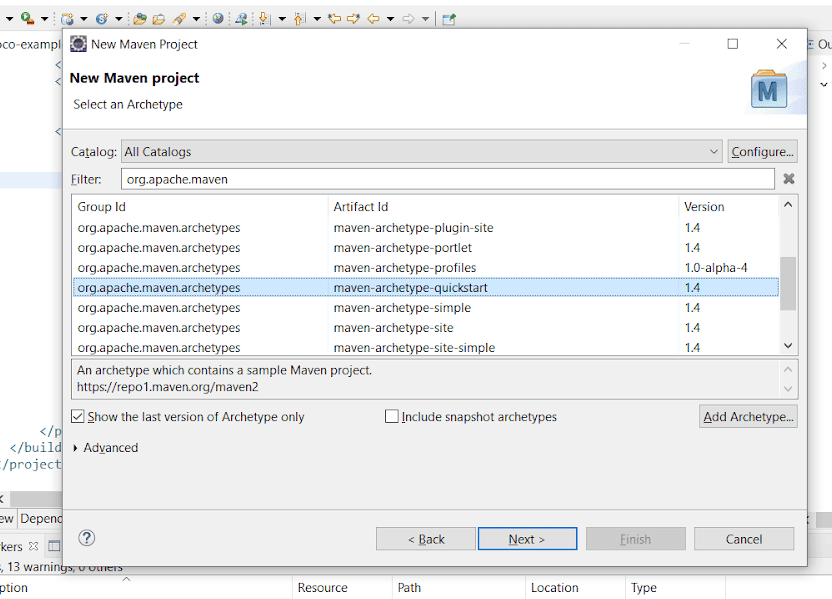 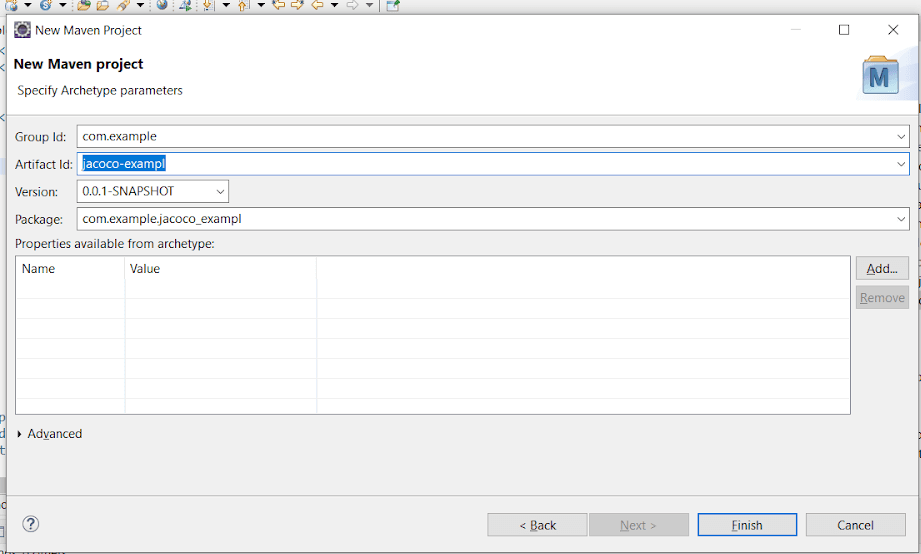 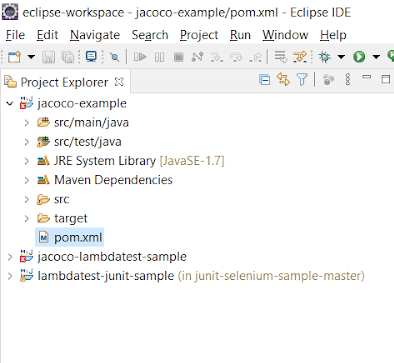 How to specify JaCoCo Maven plugin in POM.xml 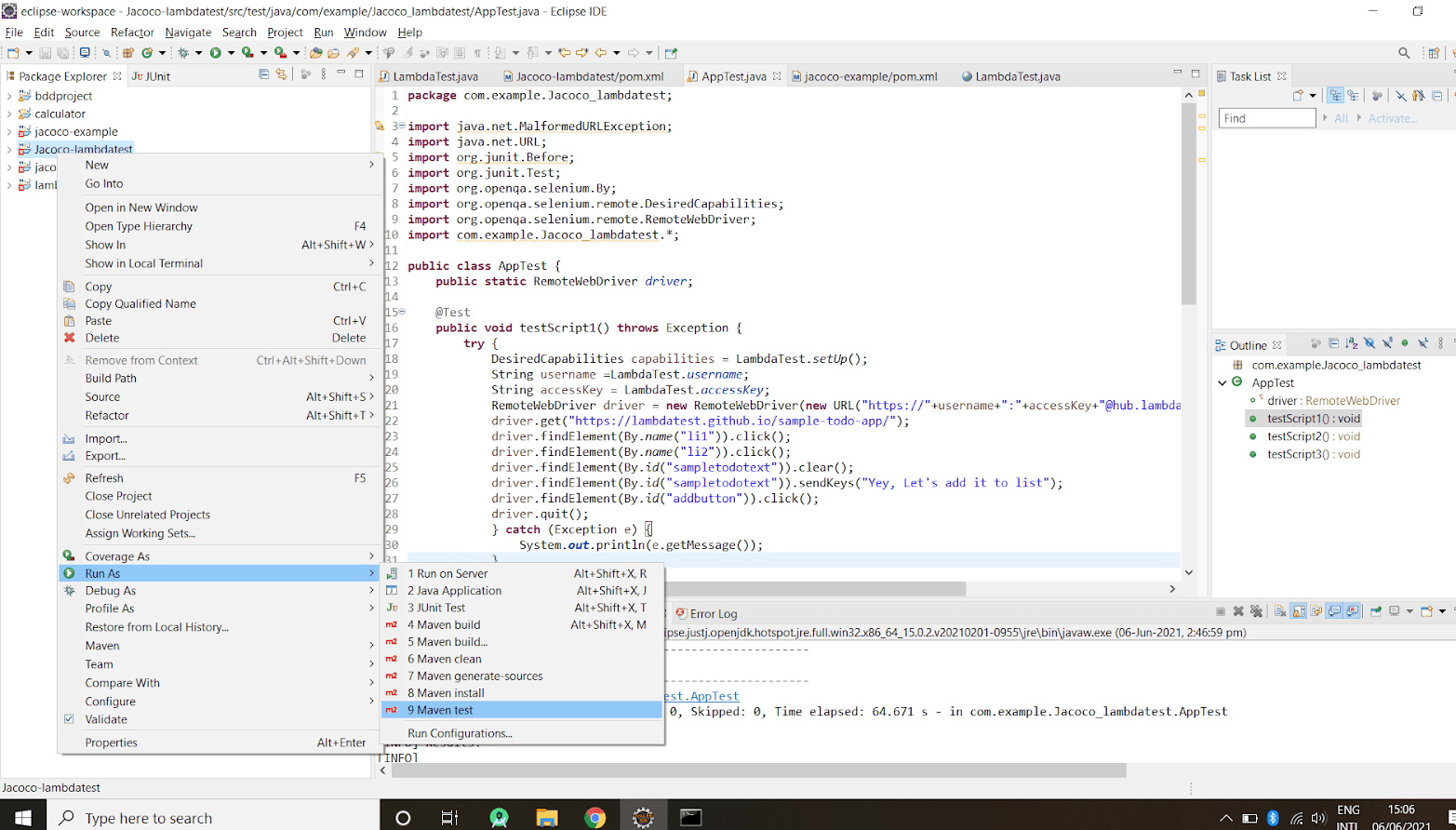 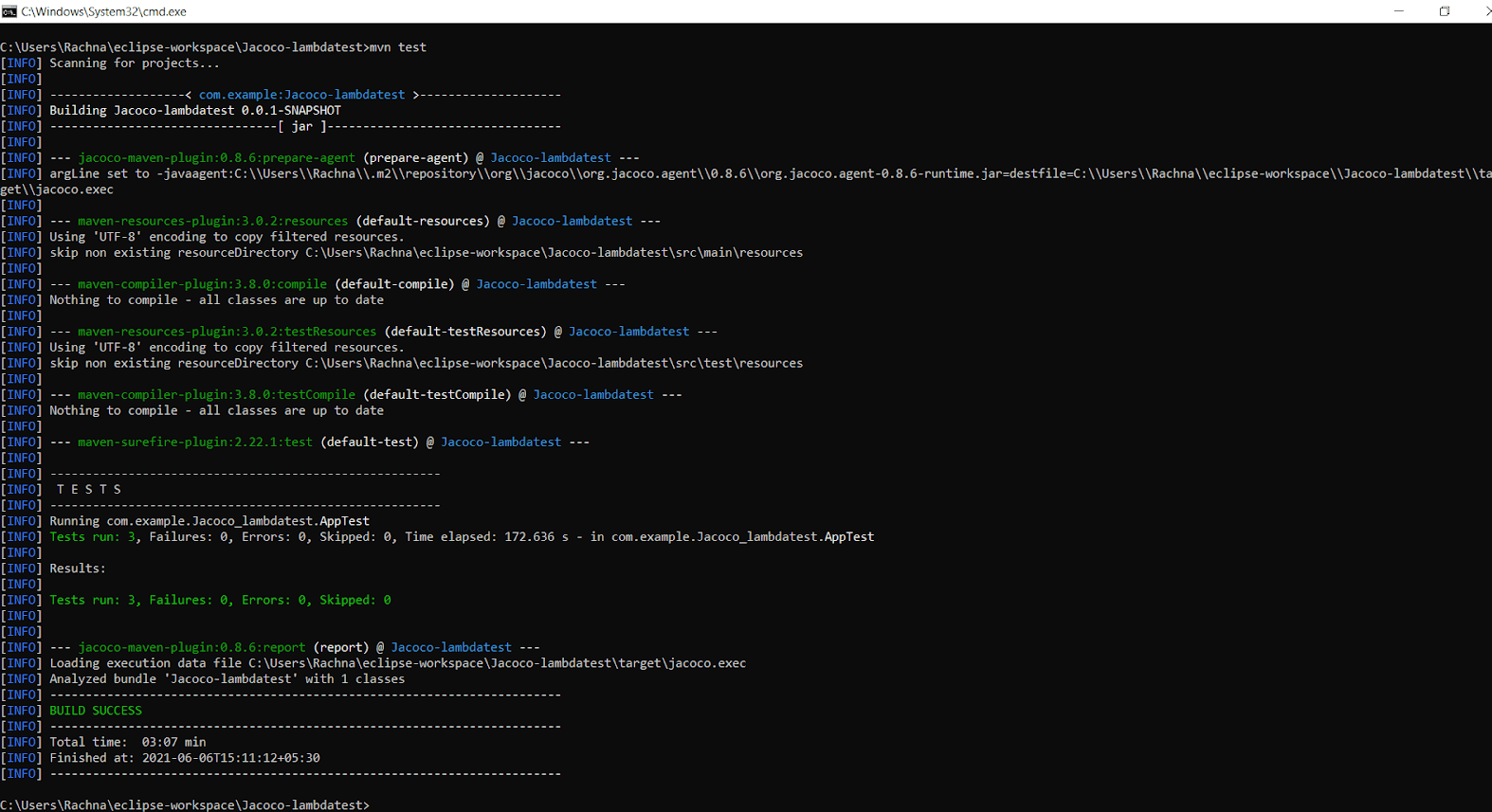 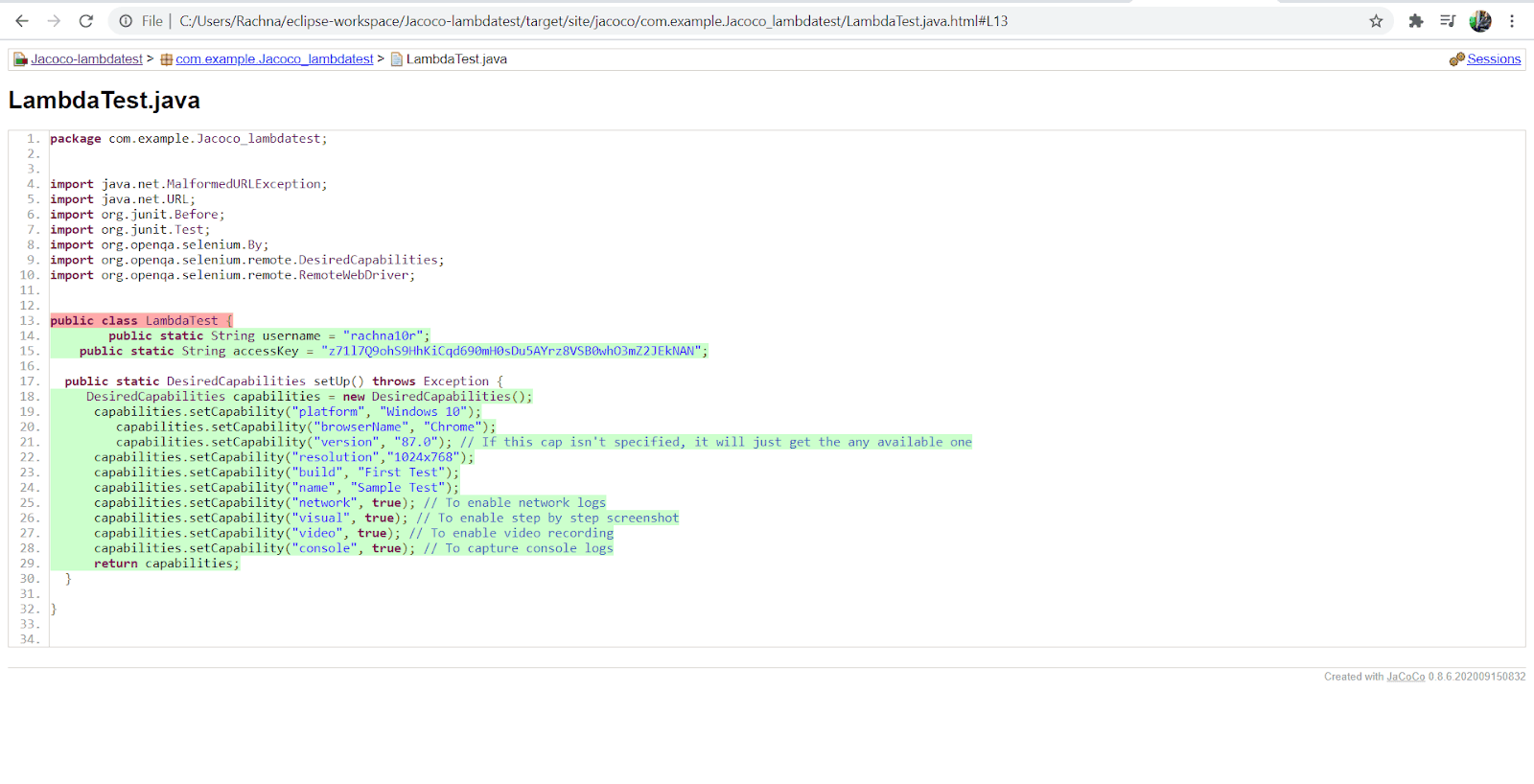 Analysis of the Code Coverage Report

Selenium testing on the cloud helps you attain better browser coverage, increased test coverage, and accelerated time to market. Parallel testing in Selenium helps you achieve the above mentioned requirements.

LambdaTest Cloud Selenium Grid is a cloud-based scalable Selenium testing platform that enables you to run your automation scripts on 2000+ different browsers and operating systems.

To run the test script using JUnit with Selenium, first, we need to set up an environment. You would first need to create an account on LambdaTest. Do make a note of the username and access-key that is available in LambdaTest profile section.

We will use this sample project for Java Selenium testing.

After downloading a zip file of the project: junit-selenium-sample from GitHub, we import it to Eclipse IDE by following the below mentioned steps: 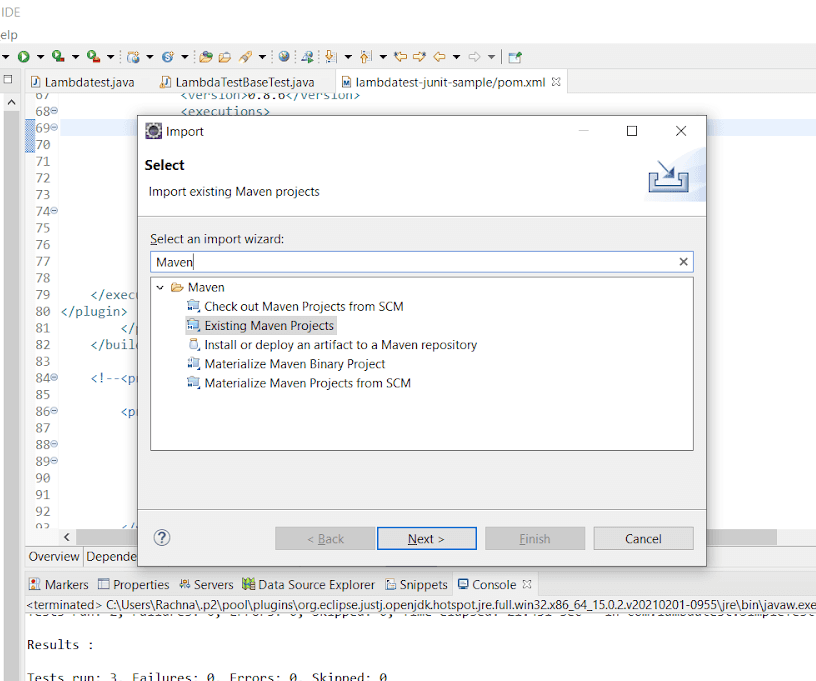 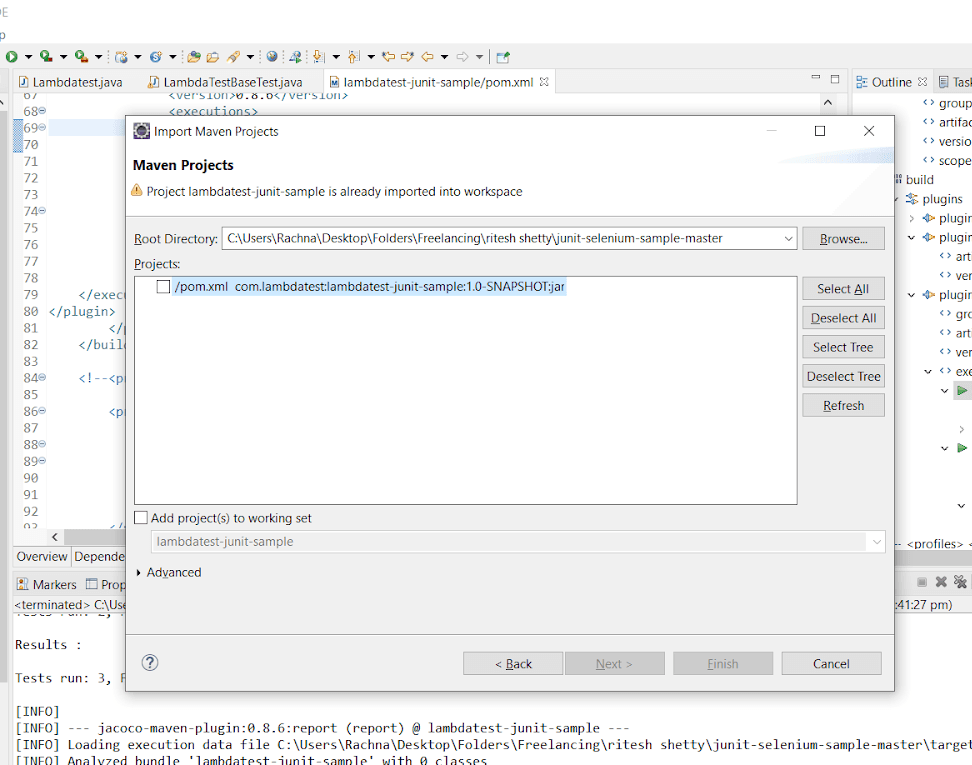 Adding dependencies in the POM.xml file: 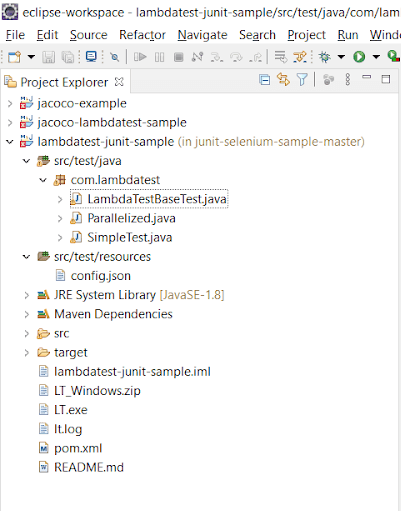 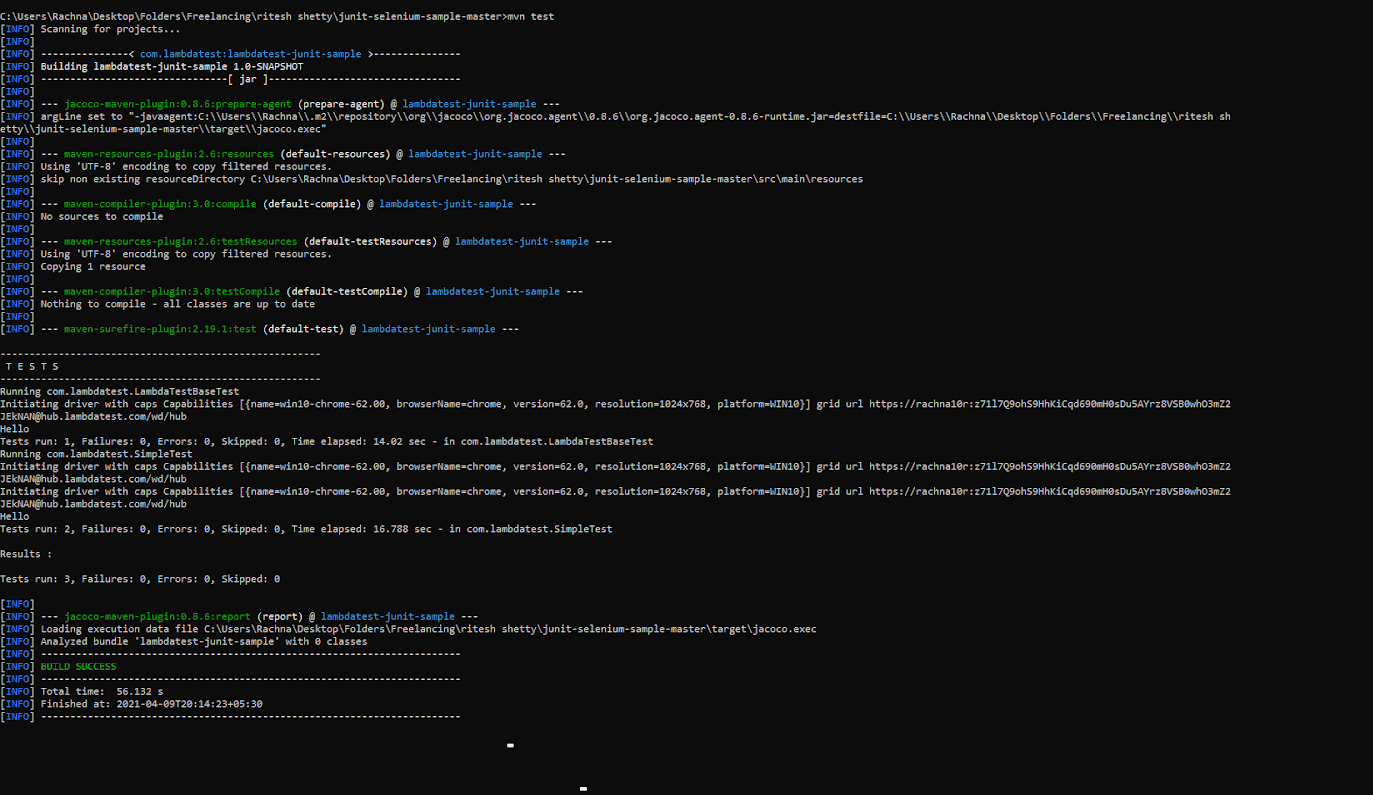 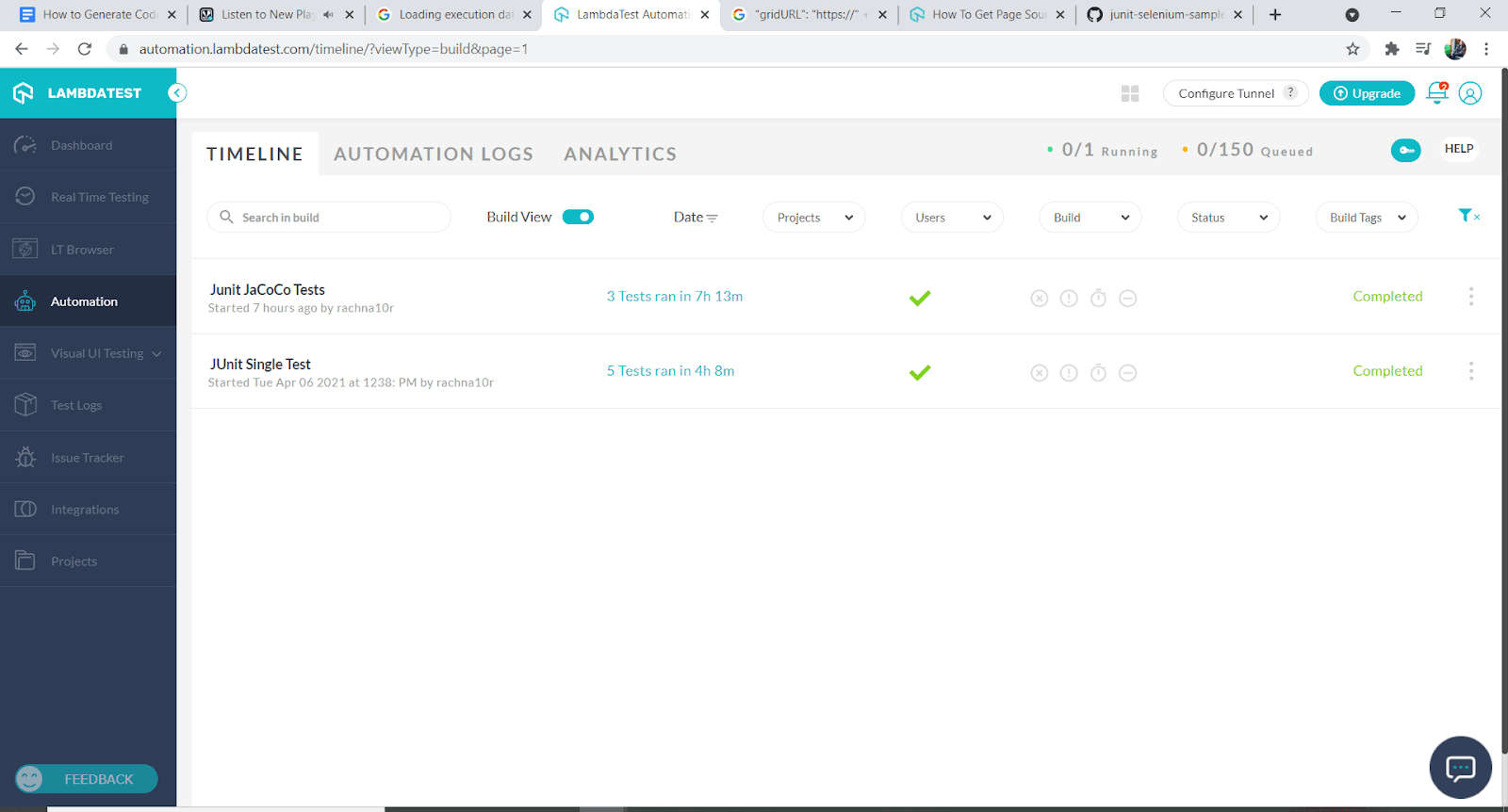 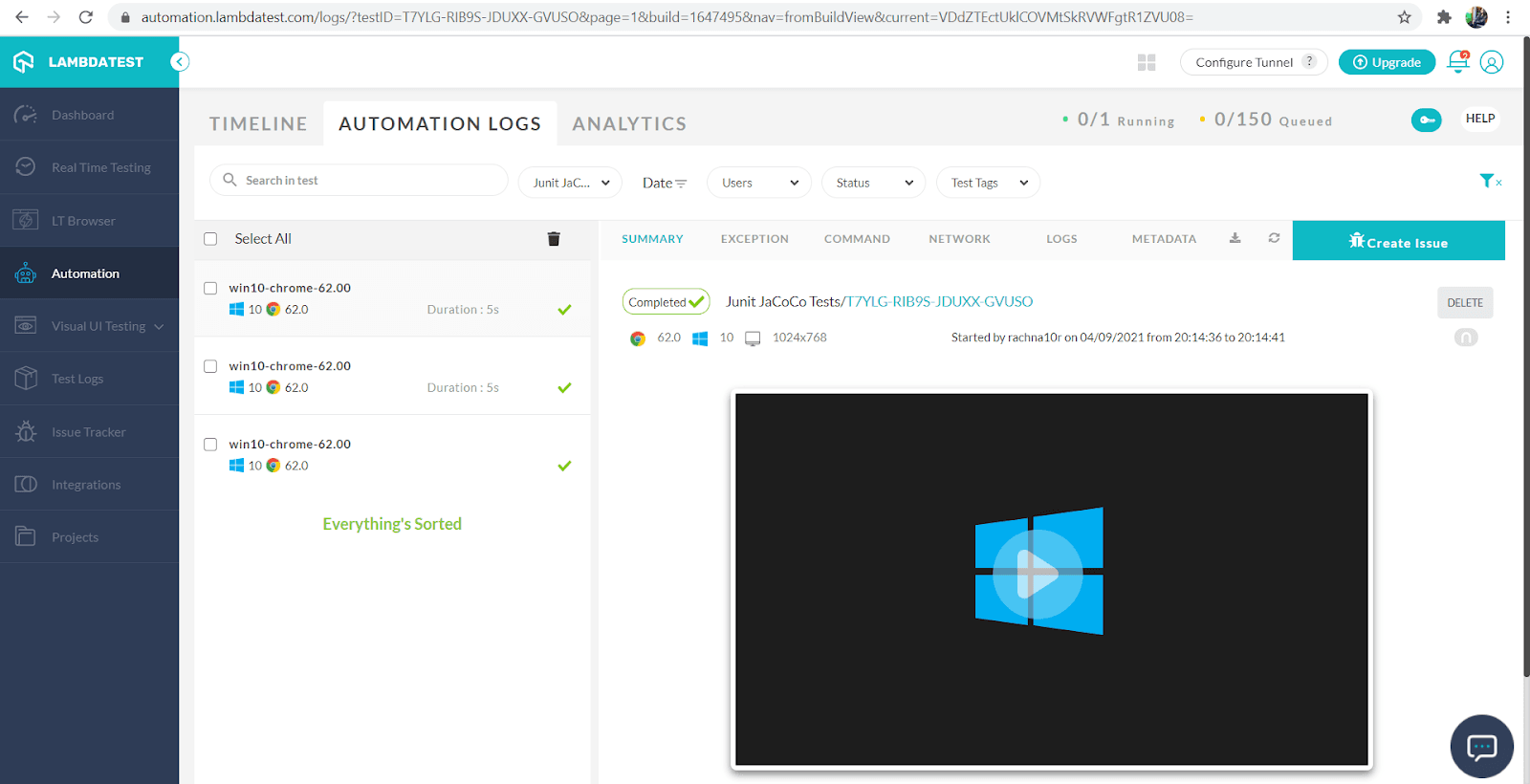 In this article, we have seen how to use the JaCoCo-Maven plugin to generate code coverage reports for Java projects. We have also leveraged the agility and scalability of LambdaTest Selenium Grid cloud to automate the test processes. Remember, though, 100% code coverage is not responsible for reflecting effective testing, as it only shows the amount of code exercised during tests.

Yet, it helps to reduce the number of bugs and improves the software release quality. Also, it adds minimal overhead to the build process and allows it to keep a certain threshold as the development team adds edge cases or implements defensive programming.

Code coverage is a really good practice, especially when you have conditional statements in your source code. Hopefully, this article will help you learn how to achieve code coverage with JaCoCo for a Maven project. That’s all for the day. However, we have some very useful content coming up on the LambdaTest blog, so stay tuned and happy testing!