“Your most unhappy customers are your greatest source of learning.”
Bill Gates

Since the time the pandemic struck the world, mobile applications and websites have become the go-to source for fulfilling all the major requirements (e.g., grocery shopping, bill payments, etc.). It would be catastrophic if the website or app takes ages to load:( In such cases, tables might turn against you, and your customers might jump ship to embrace your competitors’ services!

As performance and user experience go hand-in-hand, it is imperative to consider web performance testing on high priority. Google Lighthouse is one of the widely used tools for realizing client-side performance testing. Like me, if you are also an ardent user of the Cypress automation testing, you might know that you can run Lighthouse audits from your Cypress tests.

In this blog Cypress Tutorial, I deep dive into how you can leverage the potential of Cypress and Google Lighthouse for web performance testing.

What are performance metrics KPIs for websites

The standard load time of any NodeJS-based web application is 2 seconds which also includes loading of interactive content present on the website. Needless to mention that you need to fix it in case the load time exceeds more than 2 seconds! The story is not over yet!

Even when the page loads the content, the entire page should get loaded in not more than 3 seconds.
The Lighthouse plugin from Google Chrome is one of the powerful tools to get a performance score similar to the performance tab of Chrome Dev Tools. In addition, Lighthouse CLI can also be used for performing audits right from the command line! Though there are six performance metrics in Lighthouse 6.0, FCP (First Contentful Paint) and Time to Interactive (TTI) are the major ones that should be considered as a top priority.

Here are the ideal values for the important Lighthouse performance metrics that should be considered for websites (or web applications):

Scripting is a key metric calculated to determine how fast the web pages are getting loaded for the end-user. On similar lines, rendering and painting give the CSS load time depending on the type and category of React apps.

For starters, Cypress is a JavaScript-based front-end testing tool that is primarily suited for testing modern web applications. Unlike other test automation frameworks like Selenium, Cypress operates directly inside the web browser and comes with a unique DOM manipulation technique. Check out our Cypress vs Selenium comparison if you want to check out the best of both the test automation frameworks.

Getting started with Cypress is easy in case you are coming from a JavaScript background. Cypress is one of the few test automation frameworks ideal for E2E (End-to-End) testing, integration testing, unit testing, and more.

Check out the video from the LambdaTest YouTube channel that deep dives into how to get started with Cypress automation testing:

QA engineers prefer Cypress automation testing since there are minimal chances of witnessing flakiness in Cypress tests. Recently, Cypress has come up with a retry mechanism in which you can set the retry value as 2 in cypress.json to get the same test retried twice if it had earlier failed due to issues like delayed load time.

Getting performance metrics for each page based on its load time can be extremely time-consuming if the project has close to 40 to 200 web pages. The number of pages depends on the user journey. Now that we have covered the essentials of What is Cypress, let’s look at how to implement web performance testing to automate those web pages using Cypress and Google Lighthouse in Jenkins.

The cypress-audit plugin is used for Cypress performance testing since it integrates Lighthouse into the Cypress tests.

How to use cypress-audit plugin for Cypress performance testing

Before installing the cypress-audit plugin, you need to make sure that you have Cypress installed on your machine. If not, please follow the below-mentioned steps for setting up the Cypress framework:

Now that Cypress is installed on your machine, it’s time to install the cypress-audit plugin for taking the first step towards web performance testing.

Yarn users can install cypress-audit by triggering the following command on the terminal:

Add the following constant in index.js that is present inside the plugins folder:

Now that we have the feature file ready, we write the step definition in a shared js file for common usage across the framework as below:

Now that the test is partially ready, we can measure the website’s performance against the standards we are interested in. For example, when using Cypress and Google Lighthouse, it is required to set the test threshold based on which the tests would be declared pass/fail.

Watch this video to learn how Cypress can be used to automate accessibility testing.

Thresholds for performance testing using Cypress and Google Lighthouse can be set in two different ways. The first option is by adding the threshold within the step definition file.

Now that the thresholds are set, it’s time to run the tests. Since the tests are using Cypress installed on the local machine, trigger the following command on the terminal to run the Cypress test:

Choose the right browser and launch the test on the corresponding browser: 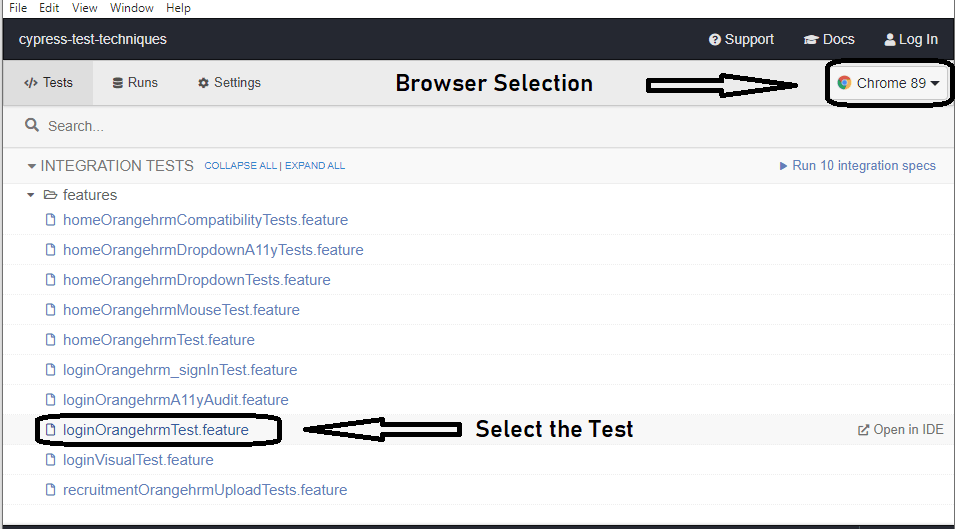 Here is the snapshot that indicates the progress of the test execution:

On a different note, I was running the same site in a different open-source tool to check the speed of the webpage, and the automation tool itself timed out, waiting for the page to load most of the time. As a laugh or cry moment, I dropped the plan of continuing the script in that tool 🙂

A major benefit of Cypress automation testing is that it provides an interactive playback on each step and provides options to pause & re-run the test at any moment in time.

When Cypress runs the tests for cy.lighthouse command, it loads the same page in a new tab of the browser for collecting the required metrics.

Note that I have not used any thresholds inside my cy.lighthouse command; hence the tests show a log indicating that it is appropriate to add thresholds and rerun the tests: 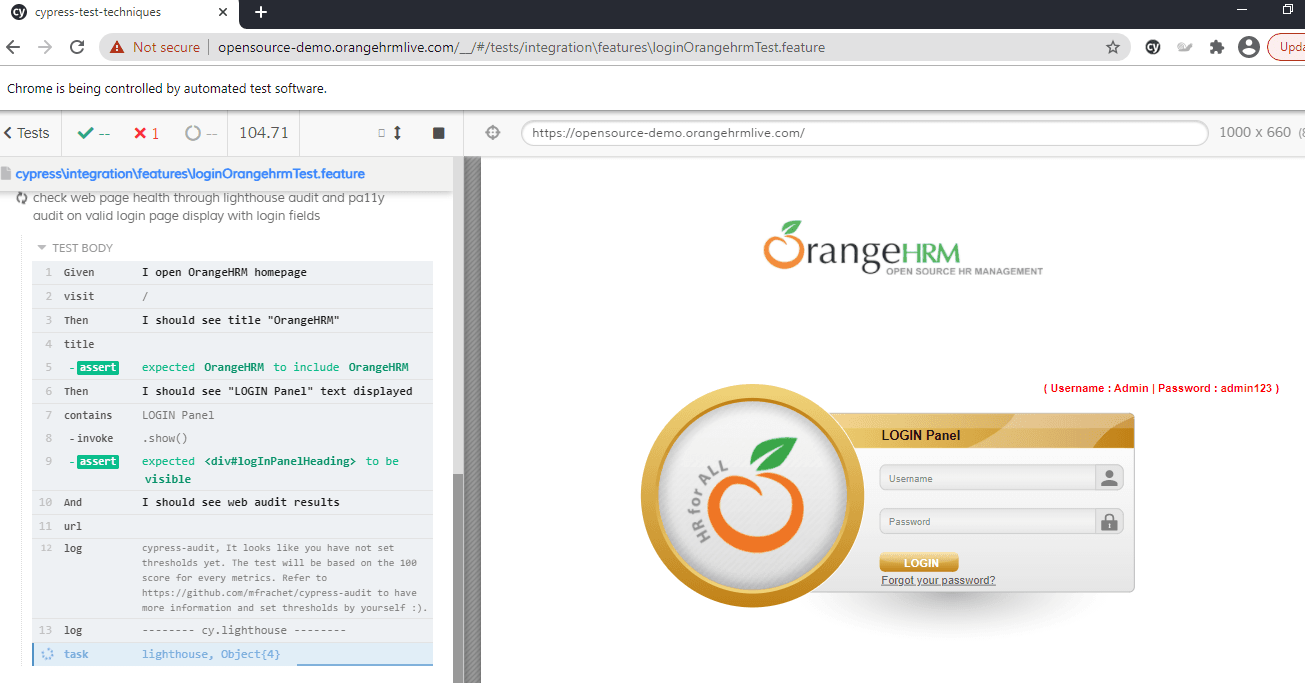 In few milliseconds, my tests failed due to the same reason of not having a threshold to my test: 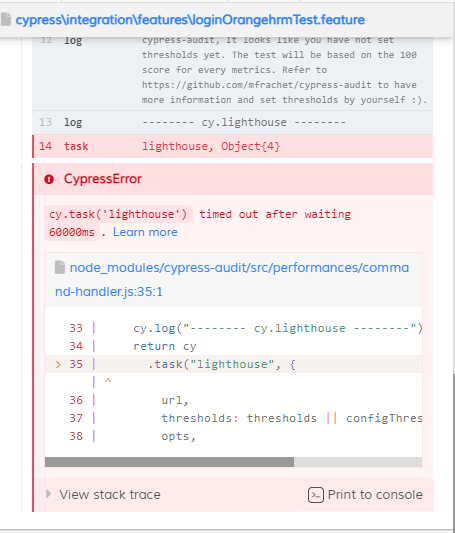 This is where we can switch to the other option for adding the required thresholds.

Adding Threshold in a constant

In this option, we add the thresholds in a constant and call the same inside the requisite step definitions.

The cypress-audit plugin will run the tests based on the score of 100 for every metric, and the options highlighted in this section helps in adjusting the metrics as per the specific requirements. We have run the tests on Cypress that is installed on my local machine, but the approach might pose scalability challenges.

Cypress testing on cloud like LambdaTest lets you perform Cypress automation testing on a range of browser and OS combinations at an expedited pace. It is the best way to leverage the benefits offered by cloud testing.

When rerunning the tests through the ‘npx cypress open’ command, it shows the metrics after loading the page in a new tab that immediately closes after the metrics are shown. However, it shows the path of the code and the specific location in the code that has failed due to poor performance.

I was more interested in checking how Cypress evaluates the metrics on any web page in a more dynamic manner. This will also give a clear indication of the components involved in generating the required metrics.

This is possible through the ‘view trace’ option that displays the metrics of the stack trace: 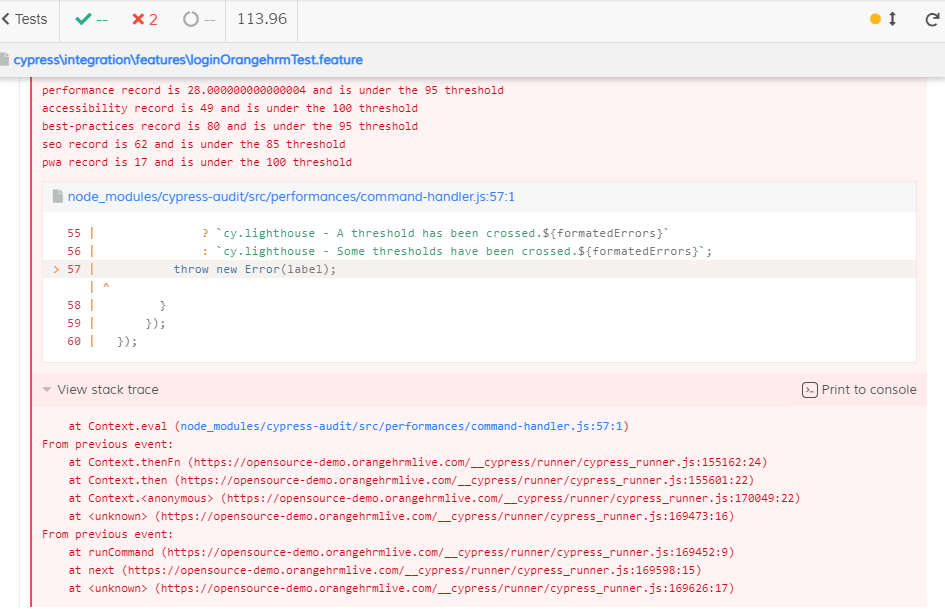 On encountering a timeout, test execution is retried if the test has failed the first time. Alternatively, it is advisable to install the latest Cypress version, such as v7 to run the tests.

Cypress comes with a best-in-class plugin called cypress-lighthouse that adds the cy.lighthouse command for auditing the website against lighthouse performance metrics.

Cypress Lighthouse plugin can be installed by triggering the following command on the terminal:

Add the following lines in command.js to use the Lighthouse plugin for performance testing with Cypress.

Use the commands such as .lighthouse to verify your results.

Starting your journey with Cypress End-to-End Testing? Check out how you can test your Cypress test scripts on LambdaTest’s online cloud.

Improving the website performance is extremely important for meeting the core web vitals. Cypress and Google Lighthouse are an ideal combination for running performance tests on modern websites (or web applications). Lighthouse plugins on Cypress make it easy to perform Cypress performance testing by adding a couple of changes to the existing codebase.

A well-optimized website eventually helps build an everlasting user experience and positively impacts search engine rankings. So, if you are a user of the Cypress framework, it’s time you leverage the benefits of Cypress and Google Lighthouse for building a top-performing website (or web application). 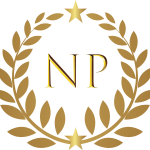 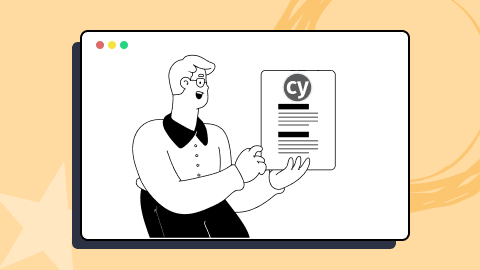 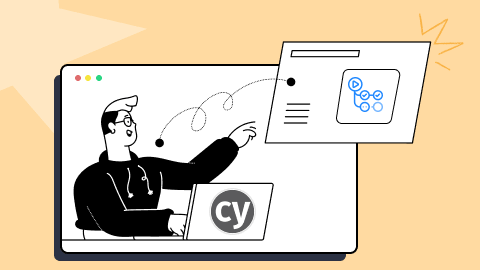 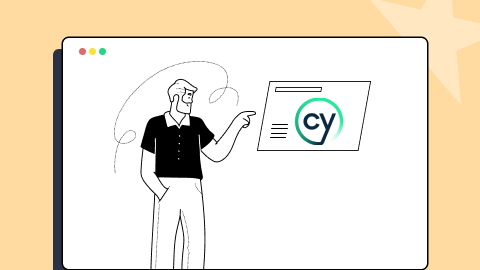 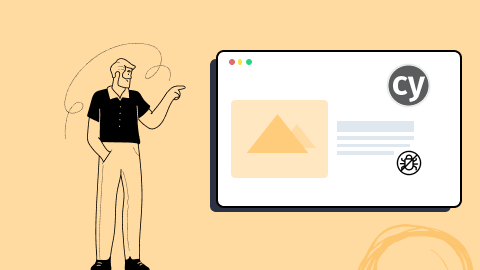 How To Get Started With Cypress Debugging 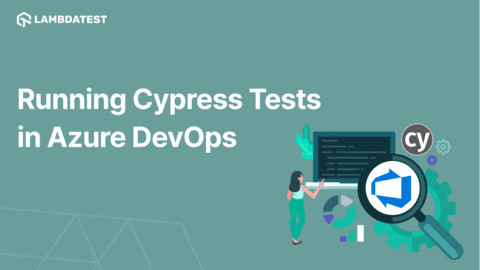