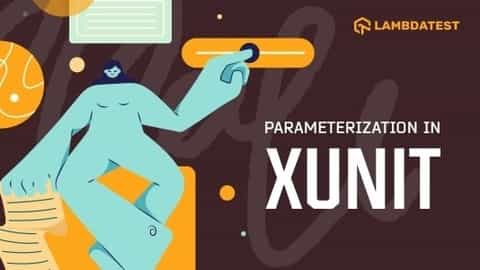 When a developer comes up with unit tests, there are multiple ways through which they try to optimize the test code. Reduction of code size by reusing the existing code is one way of achieving the same. While working with frameworks like xUnit, Test fixtures can be streamlined by devising data-driven tests or xUnit parameterized tests, thereby taking advantage of code reusability.

Like other popular test frameworks in C#, the xUnit framework also supports parameterized and non-parameterized tests for Selenium testing. The Fact attribute in xUnit denotes a test method that does not take any input arguments. On the other hand, the Theory attribute specifies a test that can take input parameters, and the method can be tested against different input combinations.

You can refer to our earlier blogs on the xUnit framework if you want to get started with automated browser testing using that framework. Parameterized tests in xUnit can be created using Theory tests, which can be used along with attributes like InlineData, ClassData, and MemberData to pass data into the test methods.

Apart from scalability, the other advantage of cloud-based cross browser testing is that tests can be executed in parallel resulting in faster test execution and improved test coverage. Browser capabilities generated using the LambdaTest capabilities generator serve as the input arguments to the xUnit parameterized test methods.

In this ongoing xUnit tutorial, we have already seen how to run the first script in xUnit. In this tutorial we will see some of the ways to implement xUnit parameterized tests using the Theory attribute and other popular attributes that enable parameterization:

Parameterized tests in xUnit with InlineData

For demonstrating the usage of the InlineData attribute on parallelized cross browser tests, we perform the following tests on different browser & OS combinations.

Browsers on which cross browser testing is performed are:

Both the test cases are the same, but the execution will be performed on different web browsers.

The complete implementation is below:

Step 1 – As the tests are executed in parallel, thread-based parallelism is achieved by setting ‘Max number of Parallel Threads to 4.’

Step 2 – The combination of user-name and access-key are used to access the remote Selenium grid on LambdaTest.

Step 4 – The implementation under IDisposable [i.e., public void Dispose()] is empty as the resources held by the Selenium WebDriver for test execution are released after the corresponding test has completed execution.

Step 5 – The browser + OS combinations that were generated for cross browser testing are used as parameters to the InlineData attribute. In turn, these values are passed to the constructor of InlineData, which then acts as arguments to the test method, i.e., LT_ToDo_Test for test case – 1.

The execution snapshot is as shown below: 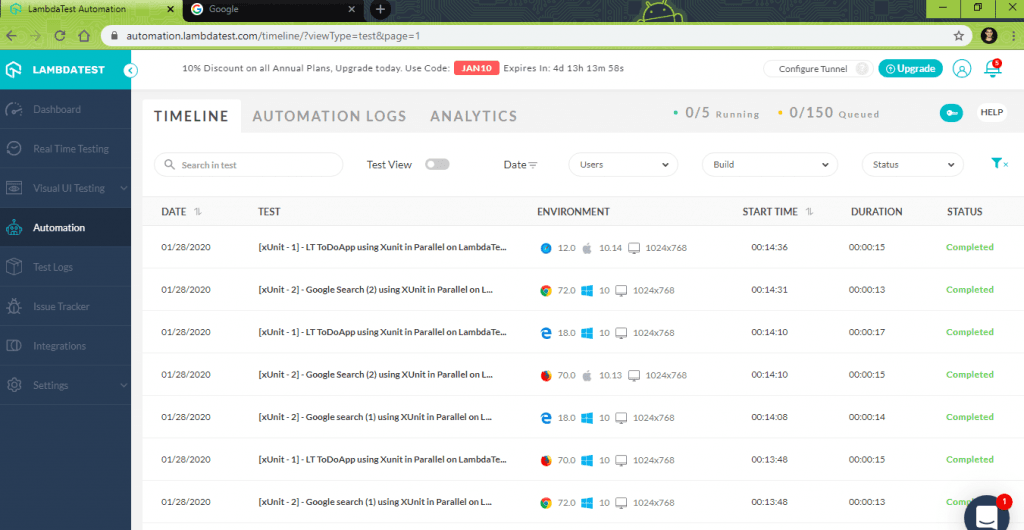 The InlineData should be used in scenarios when the method parameters are constants.

Parameterized tests in xUnit with MemberData

Unlike the InlineData attribute that can be used to provide simple compile-time constants as parameters to the test method, the MemberData attribute has more flexibility.

It can be used to fetch data for the Theory attribute using a static method that is local to the test class, using a method from another class, or passing a complex object type.

For demonstrating the usage of the MemberData attribute on parallelized cross browser tests, we perform the following tests on different browser & OS combinations.

Test Case 1 – LamdaTest To Do App

Browsers on which cross-browser testing is performed are:

Browsers on which cross-browser testing is performed are:

The complete implementation is below:

Steps 1-4 – These steps remain the same as those mentioned in the Code WalkThrough of the example demonstrating the InlineData attribute. The implementation of the core logic related to the test cases remains the same. The major change is the addition of MemberData for parameterization.

Step 5 – The data is loaded from a property or method of some other type. For a scenario that involves cross browser testing, this approach works perfectly fine as the number of browser combinations can be added without much effort.

Shown below is the execution snapshot: 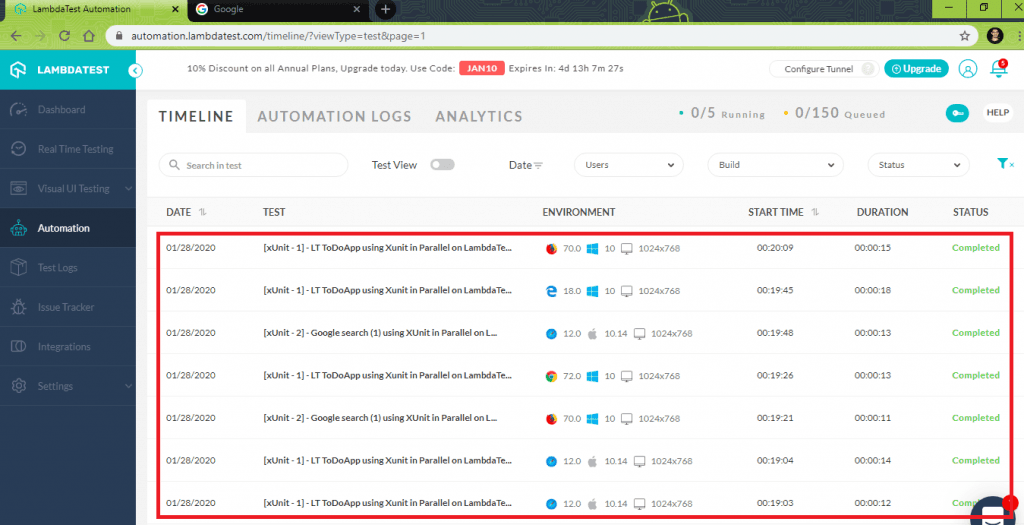 Parameterized tests in xUnit with ClassData

Like MemberData, ClassData is another attribute that is used to pass values to Theory that are not constants. For providing parameters via ClassData, a class has to be created that inherits from IEnumerable<object[]>. A private list of objects containing the browser + OS combinations is then passed to the Theory attribute.

A GetEnumerator method has to be created on the list Enumerator. Finally, the Class is passed to the ClassData attribute, where the data returned from the class populate the test parameters.

If any of these steps are missed out, the xUnit framework throws an error.

Let’s understand implementing the same in this xUnit tutorial.

Steps 1-4 – These steps remain the same as those mentioned in the Code WalkThrough of the example demonstrating the InlineData attribute.

Step 5 – Class named LT_ToDo_Test_DataSource is created which inherits the IEnumerable<object[]>. A private list of objects containing the browser combinations is created along with the implementation of the GetEnumerator method.

The execution snapshot demonstrating parameterization in xUnit using ClassData attribute is below: 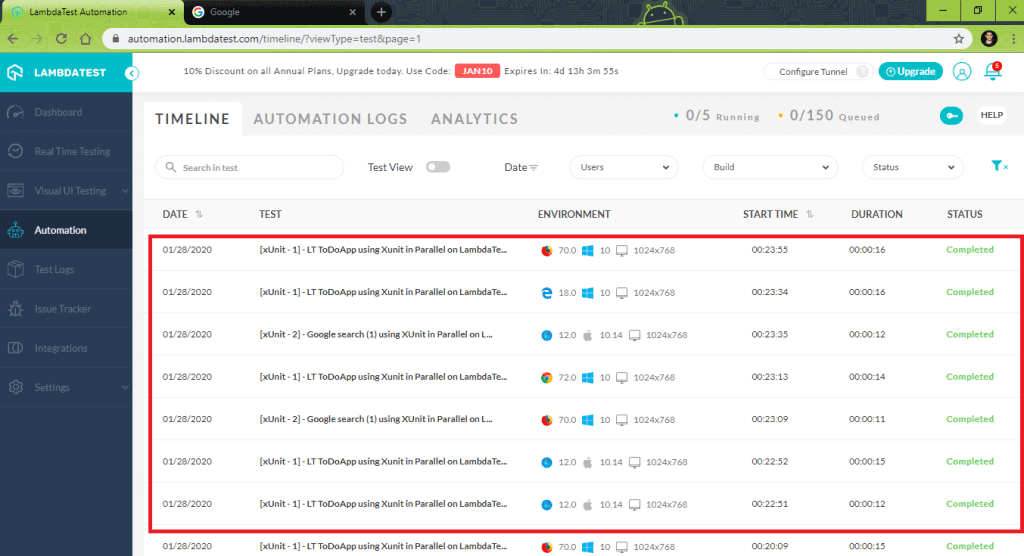 In this Selenium xUnit tutorial, we have seen how test parameterization is widely used for testing that involves a large number of scenarios. It helps reduce clutter in the test code as there is less duplication and redundancy in the test code. For simple parameterized tests in the xUnit framework, the InlineData attribute is ideal, but for more complex scenarios, ClassData and MemberData are more suitable. 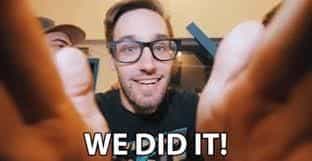 These attributes are very handy when performing exhaustive cross browser tests as most of the tests will involve numerous combinations of web browsers and platforms. The advantages of parameterization in xUnit can be multiplied if the automated browser tests are performed on cloud based cross browser testing platforms like LamdaTest as tests can be parallelized.