How To Group Test Cases In TestNG [with Examples] 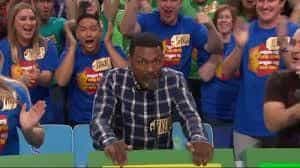 TestNG Annotations are useful for controlling the test methods’ execution flow and running multiple tests in Parallel. Parameterized TestNG tests with Selenium WebDriver are handy for running test(s) against different browser and platform combinations. As a part of our TestNG tutorial series, we look at how to group test cases in TestNG. The usage of groups in TestNG is demonstrated with relevant TestNG group examples.

What Are TestNG Groups?

As the name indicates, grouping in TestNG lets you group multiple test methods in named groups. Through groups in TestNG, you have the provision to run a particular set of tests that belong to a group or multiple groups.

The sophisticated groupings of test methods through TestNG groups are used for:

Here are some of the major advantages of groups in TestNG:

TestNG groups can also be used for running tests in Parallel at the ‘Test’ level or ‘Method’ level. In further sections of this ‘How to group test cases in TestNG’ tutorial, we would demonstrate parallel testing in TestNG and Selenium using Test Groups.

How to group test cases in TestNG?

To group tests in the source code, you have to use the @groups attribute of the @Test annotation. TestNG provides the option to structure the test such that the entire test class belongs to a particular TestNG group or a couple of methods belong to the TestNG group. Also, test methods can belong to one or more TestNG groups.

Here is how to group test cases in TestNG. As shown below, test_method1() is part of both the groups and test_method2() & test_method3() are a part of the group2 & group1 respectively.

The TestNG groups are invoked in testng.xml:

Demonstration: How to use TestNG Groups

To demonstrate running Selenium tests in TestNG within the same groups, within multiple groups, including (and excluding) test methods, etc., we use the cross browser testing scenarios that will be executed on the cloud-based Selenium Grid by LambdaTest.

Here is the overall project structure which we created in IntelliJ IDEA IDE: 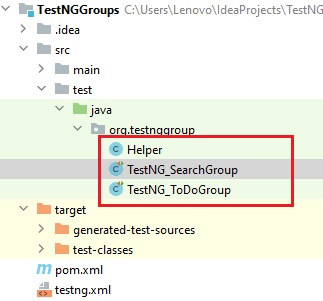 In the TestNGGroups project, we create a package named org.testnggroup, where we create the following class files (that contain the implementation of the relevant test scenarios):

(Implementation of Helper Functions for creating an instance of RemoteWebDriver)

Here are the three methods implemented in Helper.java:

How To Run Test Cases Within The Same Group?

As part of TestNG group examples, we explore the most basic use of groups in TestNG. In a project, you could have multiple Groups, but you might be interested in running tests that belong to a particular TestNG Group. In such cases, you can group the tests to selectively run ‘all the tests’ within a specific group.

In our example, we have two TestNG groups – Search and ToDo. Let’s look at how to run test cases within the same group (e.g., Search) in Parallel. Parallel testing in Selenium is preferred so that tests can be executed faster, and you can also make the most of the capabilities offered by the cloud-based Selenium Grid.

In testng.xml, we set the thread-count attribute to 2 and the parallel attribute to “methods.” Since we want to run the test cases implemented under the ‘Search’ group, the group is included in the <run> tag under <groups> .

There are two test methods under the TestNG Group “Search”:

The specified group tests will run in Parallel as per the priority specified in the @Test annotation.

As seen in the execution snapshot, two test methods under the TestNG tag – “Search” are running in Parallel:

Shown below are the execution snapshots from the IDE and the Automation Dashboard from LambdaTest it indicates that their tests were executed successfully: 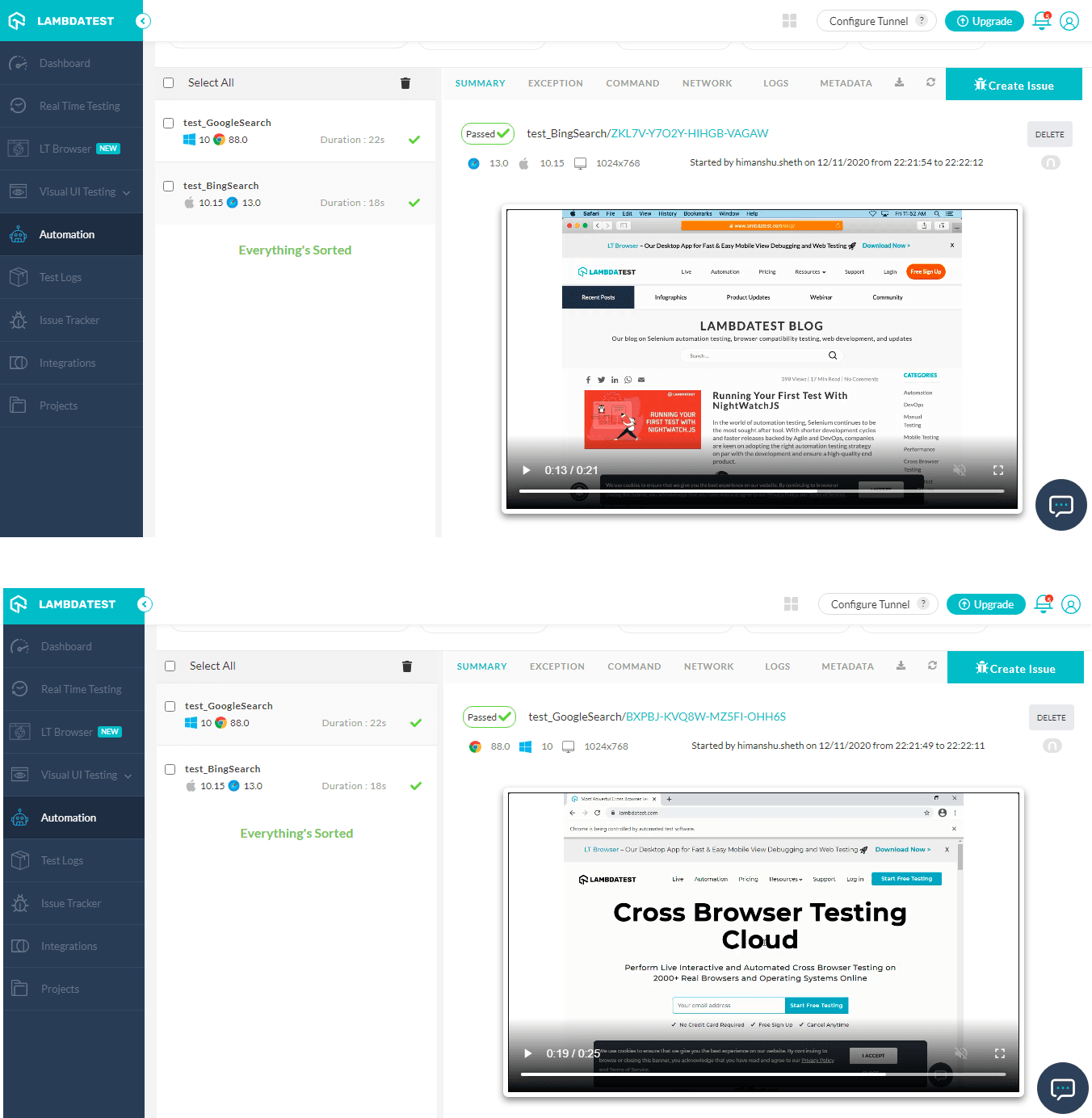 How To Run Test Cases Within Multiple Groups?

TestNG lets you run test methods that belong to multiple groups. The group names are provided as an array in the groups attribute of the @Test annotation. In our case, we have four test methods that are grouped under two TestNG groups. Since the test methods are a part of two different classes, the two Groups are included under two separate <test> tags.

The test methods of two different classes are run under different threads. Since we have set the parallel attribute to ‘methods,’ the methods (as per the set priority) in the respective classes are executed in parallel.

Here are the execution screenshots that indicate that all four test methods under the groups “Search” and “ToDo” were executed successfully:

Groups Within Groups In TestNG

In this section of the TestNG tutorial, we look at how to use ‘MetaGroups’ in TestNG. Groups can include other groups. The combined group is called ‘MetaGroup.’ Groups within groups in TestNG can be helpful in cases where a ‘collection’ of test scenarios from different groups have to be run as a part of the test case.

Shown below are the code modifications for creating four TestNg groups:

The four tests which are a part of ‘SuperGroup’ are run by including the SuperGroup under the < run > tag.

The four test methods that are a part of the nested group named SuperGroup are executed in parallel:

All four test scenarios under ‘SuperGroup’ are executed successfully:

How To Exclude/Include Test Cases With Groups?

The matching method in the class is test_BingSearch(). 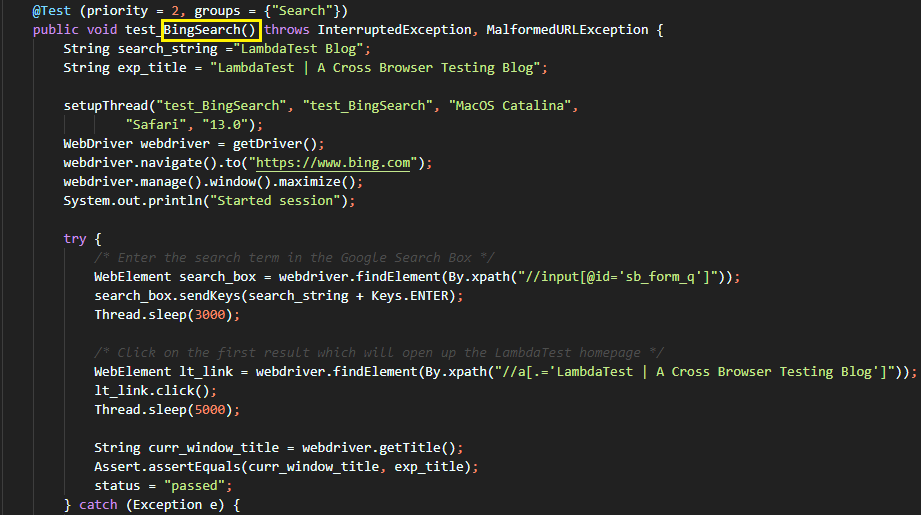 The matching method in the class is test_Selenium4_ToDoApp_Test2(). 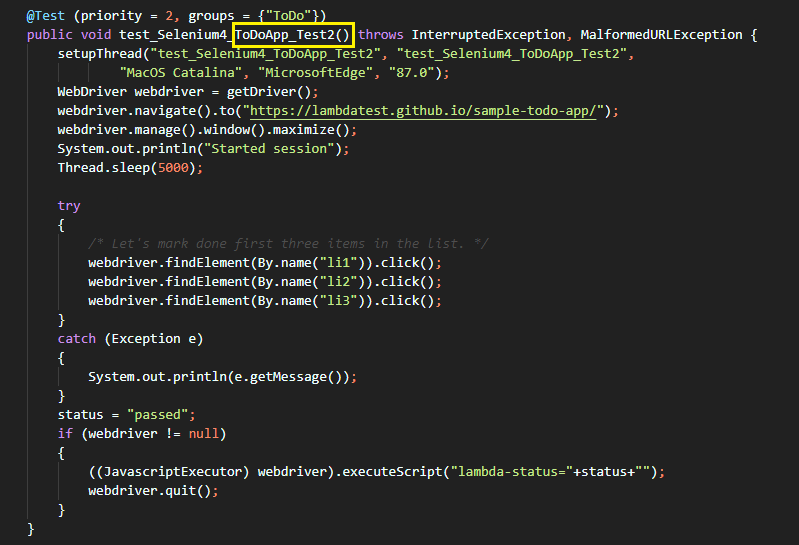 Here is the execution snapshot, which indicates that the two matching test methods are run successfully on the cloud-based Selenium Grid:

How to Exclude a TestNG Group?

The TestNG framework also lets you include as well as exclude them. Exclusion of Groups in TestNG is useful in cases where there is a temporary breakage in the tests (due to some recent changes), and you do not have the time to fix them.

The tests in those groups can be temporarily deactivated to be later reactivated once the issues have been fixed. Groups can also be excluded using Regular expressions.

The TestNG Group named “ToDo” matches the criteria set (i.e. “.*ToDo.*”) in the <include> tag. On the other hand, the test methods implemented in TestNG_SearchGroup are excluded as they meet the <exclude> tag requirements. 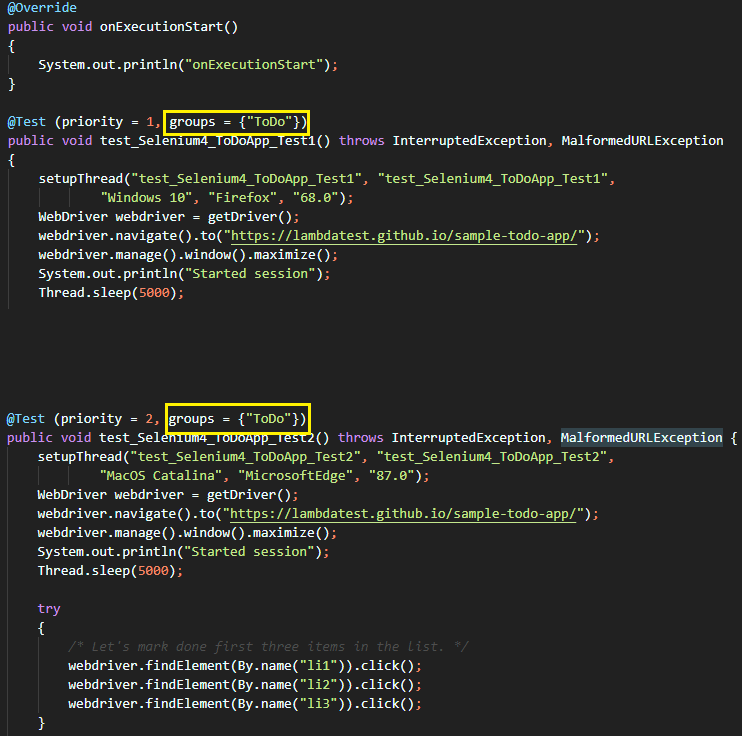 As seen below, the test methods from the matching TestNG Groups were executed successfully on the LambdaTest Selenium Grid: 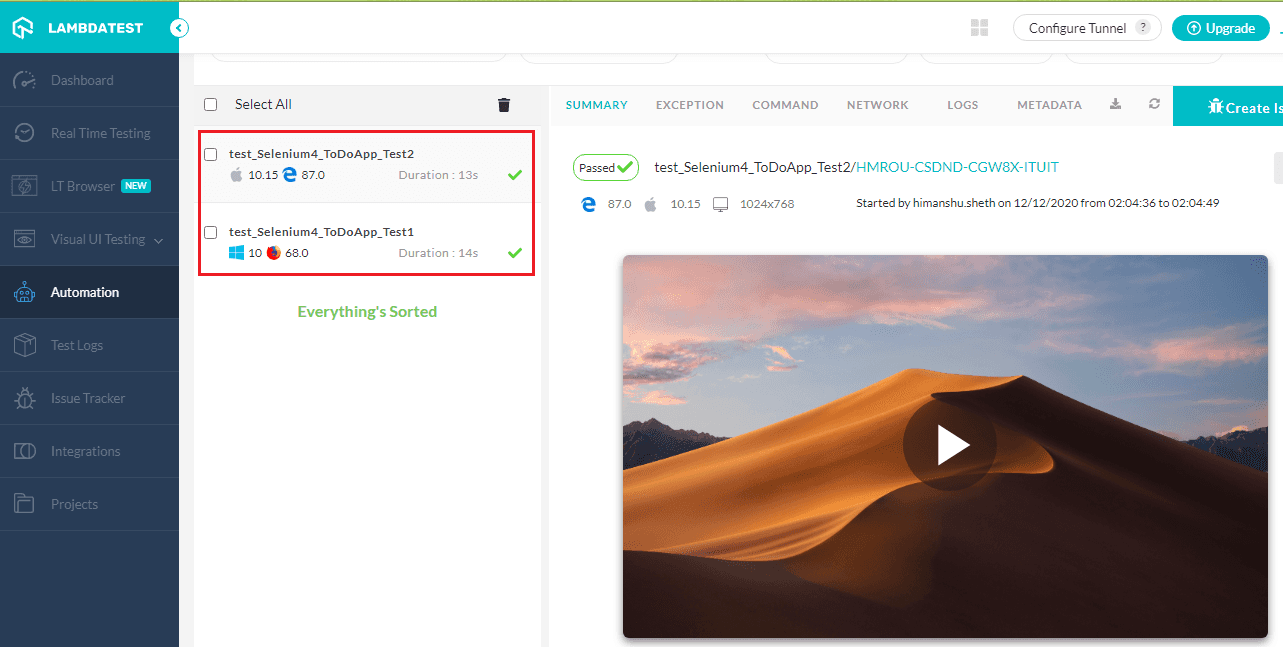 As seen in the testng.xml, tests under the groups – “Search” will be executed. Hence, the test methods test_GoogleSearch() and test_BingSearch() are run as per the assigned priority. 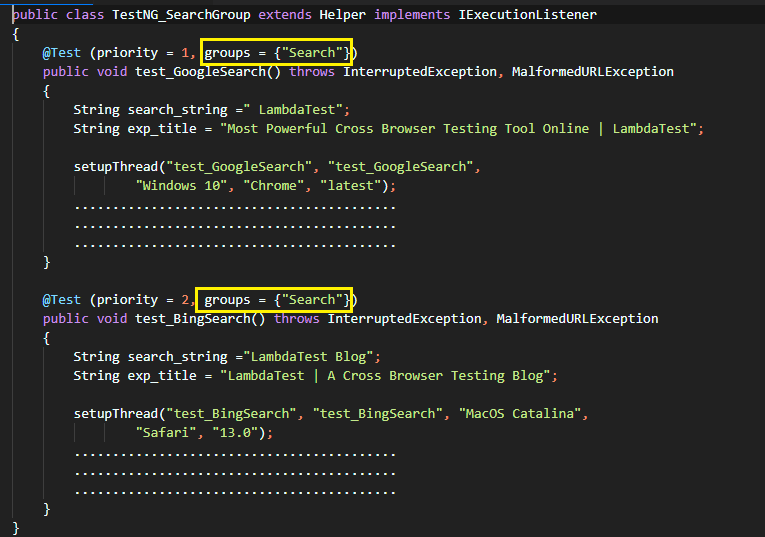 As shown below, the test methods matching the corresponding TestNG Group name are run successfully:

How To Group Your Tests On LambdaTest?

To group tests on Lambdatest using custom tags, create a String array containing the names of the custom tags, separated by a comma.

Now add this custom tag in the Desired Capabilities instance, as shown below:

In our case, we set the capabilities in the setupThread() method, defined in the Helper class. We create a Custom Tag that consists of the combination of Platform Name and Browser Name & Browser Version used in the cross browser testing.

You also have the flexibility to filter the tests by selecting multiple tags at once from the filter toolbar.

Here we filter the tags matching ‘MacOS’ to locate the tests run on the macOS platform:

Custom Tags should be efficiently used for grouping test cases on LambdaTest so that it becomes easy to filter ‘required’ tests from the numerous tests executed on the Grid.

Check a complete guide for your first TestNG automation script.

In this TestNG tutorial, we had a detailed look at how to group test cases in TestNG. Groups in TestNG are useful in projects where you want to run test scenarios that match certain criteria. For example, all the cross browser tests can be put under a group named “crossbrowser” so that the tests can be easily identified. Grouping of tests also helps in temporarily disabling tests that might be causing breakage in the other tests.

As evident from the TestNG group examples, you can run tests within the same group, within multiple groups, within nested groups, and more. Regular expressions with groups and test methods are convenient when you want to include/exclude test cases (or groups) that match a certain condition.

How do you run a group of test cases in TestNG?

You can specify your Groups using the <groups> tag in your testng.xml file, under the <test> or

How do you write multiple test cases in TestNG?

While working with the TestNG test suite in selenium, you can perform these steps to write multiple test cases.

How do I combine multiple groups in TestNG?

You can combine multiple groups to a single Test in TestNG using the test group feature. Define <groups> in the TestNG xml file to run a group of test cases from the collection of test cases.