How To Take A Screenshot Using Python & Selenium?

The goto software framework for any web developer looking for an open-source, free test automation tool is Selenium. It is used with various programming languages, including Java, Python, PHP, Perl, and C#. Selenium can also be used as a web-scraping tool or to create a human-replica bot to automate social-media or even test PDF files! Geeks at Google & Thoughtworks are highly credited for its development and maintenance.

What Is Selenium Python Bindings?

Before we learn how to use Selenium Python for taking screenshots, we need to install some dependencies. Below is a list of all that you need in your machine- 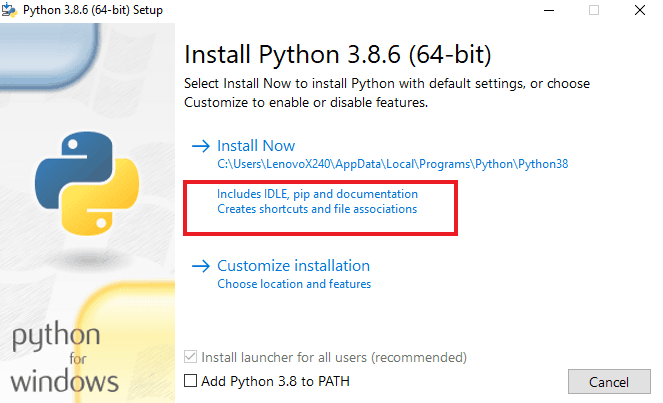 Note: Python 2 is redundant now. So, if your Linux or Mac system is having the older version, you may consider updating them to the latest stable versions.

This should fire-up a Firefox instance and automatically load the LambdaTest homepage. If this worked for you, we’re all set to capture Python Selenium screenshots of websites.

If you would like to store these images in a specific location other than the project directory, please specify full path as the argument to get_screenshot_as_file.

Let’s understand what we are doing here.

from selenium import webdriver – This line imports the WebDriver which we use to fire-up a browser instance and use APIs to interact with web elements.

from time import sleep – This line imports the sleep function from Python’s ‘time’ module. This accepts integer arguments which equals the number of seconds. The script waits for the specified number of seconds before executing the next line of code.

This fires-up a Firefox instance controlled by a Selenium driver and fetches the URL specified as an argument to get(argument) function.

sleep(1) – This halts the script from running for 1 sec. This step is often required when there are animations on the page or when you explicitly want to wait for a while so that some actions can be performed or pages can load fully.

Note: Selenium WebDriver by default waits for the page to load completely before executing the next line of script or operation. But in some advanced JavaScript rendered websites, we may need to use ‘sleep’ for manually pausing the script for a while so that animations and the page itself is fully loaded.

This finally clicks the visible section of the webpage in the launched Firefox instance and saves the screenshot with specified name and extension.

browser.quit()– Lastly, the browser needs to be closed and this line does the same.

This is the easiest way to save the full page screenshot. Just replace the get_screenshot_as_file command with save_screenshot, as displayed below-

Next, we will see how to use Selenium Python to capture screenshots with the help of Selenium ChromeDriver.

‘save_screenshot’ function works with ChromeDriver, but to propose an alternative solution, we will also show you how to use the screenshot function to take a full-page screenshot. Here is the script-

Let’s understand what we are doing here. First of all, in this example, we are using ChromeDriver. Earlier we had used a GeckoDriver for using Firefox as a browser. More or less, the other functionalities are the same.

We import ChromeOptions to set the browser as headless so that it runs in the background. We could have directly used webdriver.ChromeOptions, but to make it more understandable we split it into a separate line of code.

Here we use the newly set ChromeOptions and pass it as parameter to the webdriver’s Chrome function. Observe, previously we used “Firefox()”. “Browser.get” launches the instance and fetches the URI.

The first line is a lambda function to find the value of X. We get the value by executing DOM JavaScript functions. The second line is to resize the window.

Finally, we track down the body element of the webpage by using the driver function find_element_by_tag_name and pass “body” as parameter. You could also use find_element_by_id, find_element_by_xpath to locate the element.
We used a ‘.’ operator nested screenshot() function in the same line to capture the full page screenshot. Lastly, we terminate the Chrome instance using browser.quit().

We now demonstrate how we can use the save_screenshot() function to capture any element on the page, say a button or an image or a form, anything. We shall use Python’s PIL library which lets us perform image operations.

We shall capture a feature “section” element on LambdaTest website with following XPath – “//section[contains(string(),’START SCREENSHOT TESTING’)]”

The final script would be :

This script when executed would save the cropped info-element from LambdaTest website as cropImage.png.

This line imports the Image module from PIL library of Python.

This line locates one of the features on LambdaTest website using XPath (as you can see below.) 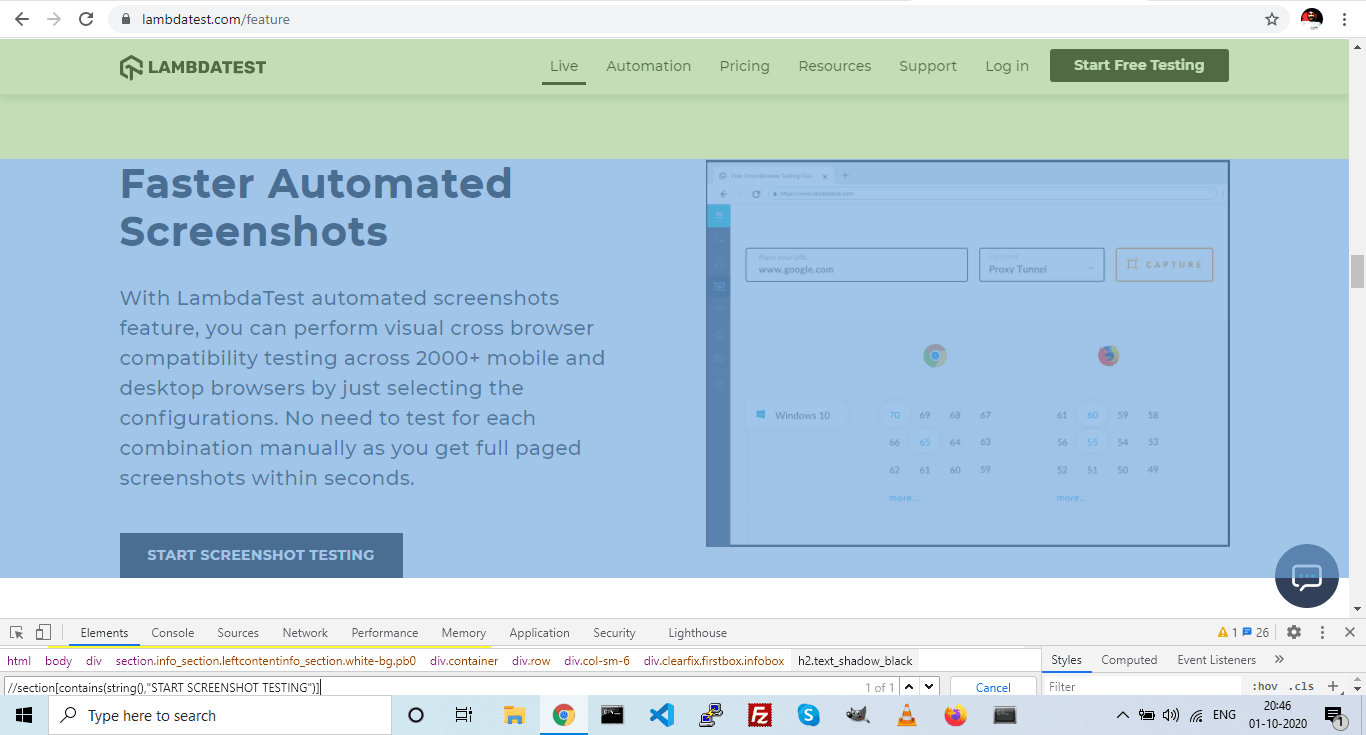 First-line fetches the vertical and horizontal start location of the feature-element. Second line gets the width and height of the element.

We first open the image and store bytes in a “fullImg” variable.
Next we crop it using the x,y,w,h parameters we calculated.
Lastly, we save the cropped image.

What Role Do Screenshots Play In Test Automation?

Automated screenshots could help in easy identification of the bugs and faster doing it all manually. Most importantly, it can be as scalable as the application you are testing without requiring extra testers. A direct implication of all above is – automated screenshots are a cost-effective and time-efficient process.

You can also refer to the below video tutorial on How To Take Screenshots In Selenium testing.

If you would rather use other ways to capture Python Selenium screenshots, you can also use this library to take screenshots. For installing it, execute the following command.

Why Selenium & Python Are Well-Suited For Capturing Screenshots?

Selenium and Python are the goto choices when it comes to Selenium test automation. And this is not just limited to capturing screenshots, there’s a lot more you can do using this awesome combination. Let’s find out why-

In this tutorial, we learned about using Selenium and Python to capture screenshots of web pages. This is essentially the best way to catch bugs efficiently and save your team a lot of time. The best way to perform cross browser testing is to compare how the web pages are rendered over multiple browsers or devices.

You can use a cloud-based platform like LambdaTest to capture your website’s screenshots or a particular web page without going through the trouble of writing the code. You can do this on a selection of 3000+ browsers and operating systems over a Selenium Grid cloud. We hope these tools will come in handy when you are not in the mood to write all that code but just want to hunt some bugs!

If you have any issues or questions don’t hesitate to reach out via the comment section.
Happy testing!